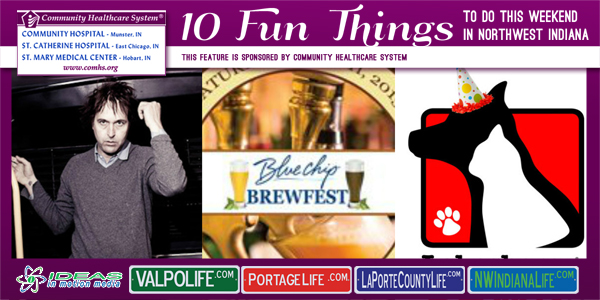 We're getting into mid-April with great events this weekend! As always, if you have an event you'd like to feature, send us an email at share@ideasinmotionmedia.com!

The La Porte County Historical Society Presents the Maple City Four
In 2007, many recordings, photos, scrapbooks, and other memorabilia was donated to the La Porte County Historical Society. Honoring the Maple City Four has become the Spring 2015 exhibit at the museum. Rare copies of “Whispers in our Maple Tree,” the yearbook put out by the MC4 Fan Club will be shown, as well as original songbooks used by the “boys.” Also featured will be snapshots on location in Hollywood, showing Trigger himself! The display will be up for all of March, April and May.

Lakeshore PAWS is Turning 4!
Come join us in celebrating our 4th year of rescuing dogs and placing them in forever homes. The birthday bash is planned from 10 a.m. to 2 p.m. April 11 at the adoption center, 405 Elm St. in Valparaiso. We will be sharing cake, refreshments, loads of fun, memories and a chance to meet some great dogs.

Cancer Benefit for Autumn Degard
A benefit is planned for Saturday, April 11 from 1-5 p.m. at Deep River Church of Christ in Merrillville where there will be food and fun for the whole family. One of our goals is to raise funds to help offset the cost of Degard’s medical bills, but our other goal is to bring people together - friends, family, neighbors and strangers - to show Degard how many people have her back in her latest battle.