From day one, he has engaged students and gotten to know them. Every day, he works extremely hard to aid Mrs. Lipinski, Washington Township’s Principal, and keep the school running smoothly; however, his main focus is athletics. It is not unlikely to run into Kaufman at any of WT’s sporting events.

Mia Lewis, a freshman varsity soccer player, wanted to express her gratitude for Kaufman’s enthusiasm and attention towards sports.

Kaufman brings an energy to games that cannot be matched. Whether it is getting ice, working concessions or driving around the golf cart, Kaufman is always there to help. When students were asked how many hours Kaufman spends at school, answers ranged from 37 (Kaylee Batzek, senior) to 80 hours (Megan Boby, freshman). Although he does not spend 80 hours at school, with him running around constantly, it seems like it. His continuous dedication towards athletics and students has been remarkable from the start.

Getting to know Kaufman
When looking to hire a principal or vice principal, one looks for someone diverse that can bring something interesting to the table. Kaufman has exceeded expectations. Coming from Thomas Jefferson Middle School as a PE and health teacher, Kaufman has experience in a large school setting. Although the numbers are roughly the same, Washington Township is grades 6-12, unlike TJ, which is 6-8.

“It seems that all of the students grow to know each other more here than at other schools,” said Kaufman.

He also mentioned that “there is a sense of pride when people discuss our school” and that “it feels like a home more than school.”

Kaufman has been warmly accepted into the Washington Township community by students, parents, and faculty. His hard work has not gone unnoticed and is an admirable trait.

If asked about Kaufman’s talents, the average person would talk about his resourcefulness and his work ethic. A select few would instantly talk about his hidden musical talents. Kaufman can sing, play guitar, and even write his own music.

“I used to play at establishments here in town and would sometimes play in the library at my old school on my lunch breaks,” Kaufman said.

One can only hope he continues his lunch jam sessions at Washington Township. 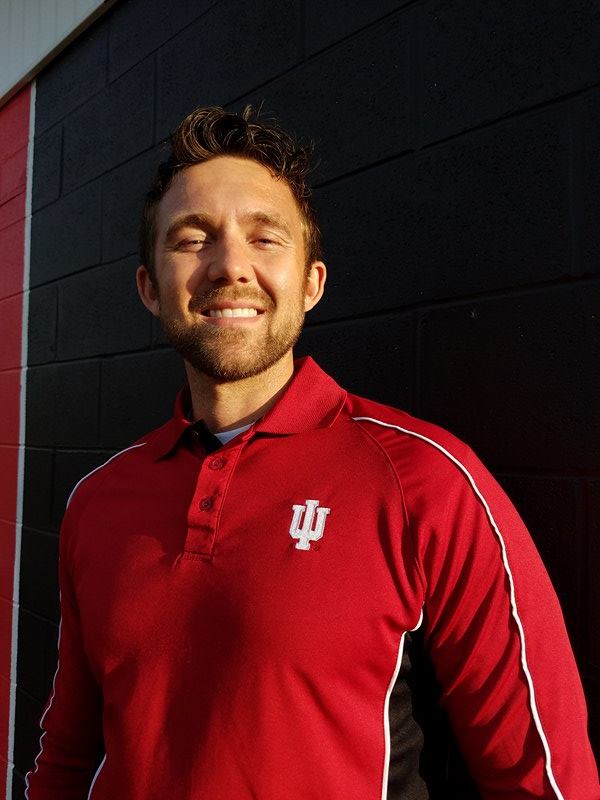 Besides his musicianship, Kaufman describes himself as a “trivia junkie”. He oftens found himself spending too much time on Trivia Crack and had to delete the app. Besides his addiction to trivia, Kaufman is shockingly the oldest of six boys. His family tree grows larger with his fiancé J’ai and his soon-to-be step-children Andi and Cort. He describes them as his “biggest fans.”

Before his advancement into secondary education, Kaufman attended Indiana University Bloomington to major in Kinesiology, with Washington Township’s own Tim Brunton, PE Teacher.

When Mr. Brunton received Mrs. Lipinski’s email about Kaufman being hired, he “couldn't have been anymore happy.” They had been great friends for years and had continued communication out of college.

“When college was over, we stayed in touch, and he called to tell me that he had an interview at Valpo schools. Since he lived a few hours away, he came and stayed at my parent’s house the night before the interview, so he wouldn't have had to make such a long drive that day,” Brunton said.

A year later, Brunton was hired at Washington Township. How many people can say that they ended up working in the same city as their college best friend? Brunton and Kaufman took it one step closer when Kaufman accepted his position here at Washington Township. They remain great friends, bonded by their two IU Intramural softball championships.

“I think he has stayed the same since college. He is a hard worker, very educated, great personality and a great person to know,” said Brunton. He also mentioned that “he is an amazing singer” and to “check out his stuff.”

It is feasible to see Kaufman as a principal. It seems ludicrous that this is his first year in an Athletic Director/Assistant Principal position. He handles his job with such ease that you would think he has been doing it for years. It will not be long before he moves up. Whether it is at Washington Township or not, Kaufman will make an excellent principal.

Principal Sue Lipinski said, “He has the knowledge, dedication, and passion to serve students, teachers and families well as a principal.”

The students of Washington Township agree with Lipinski's opinion.

“Mr. Kaufman is a great asset to the school. Not only is he involved, but he is supportive”, said freshman Josie Jones.

“Mr. Kaufman is a really cool guy. He is always there to help when you need him,” DeHaven said.

For only being here less than two months, Kaufman has made an incredible difference for Washington Township’s students. He is a role model that inspires students to work for what they want and to never give up.

Students should also take away the fact that Kaufman is so versatile. He is recognized as Washington Township’s Athletic Director/Assistant Principal, but he is so much more. He is an educator by day and musician/trivia junkie/dad/golf player by night. Kaufman stays close to his roots and always has the students’ best interests in mind.