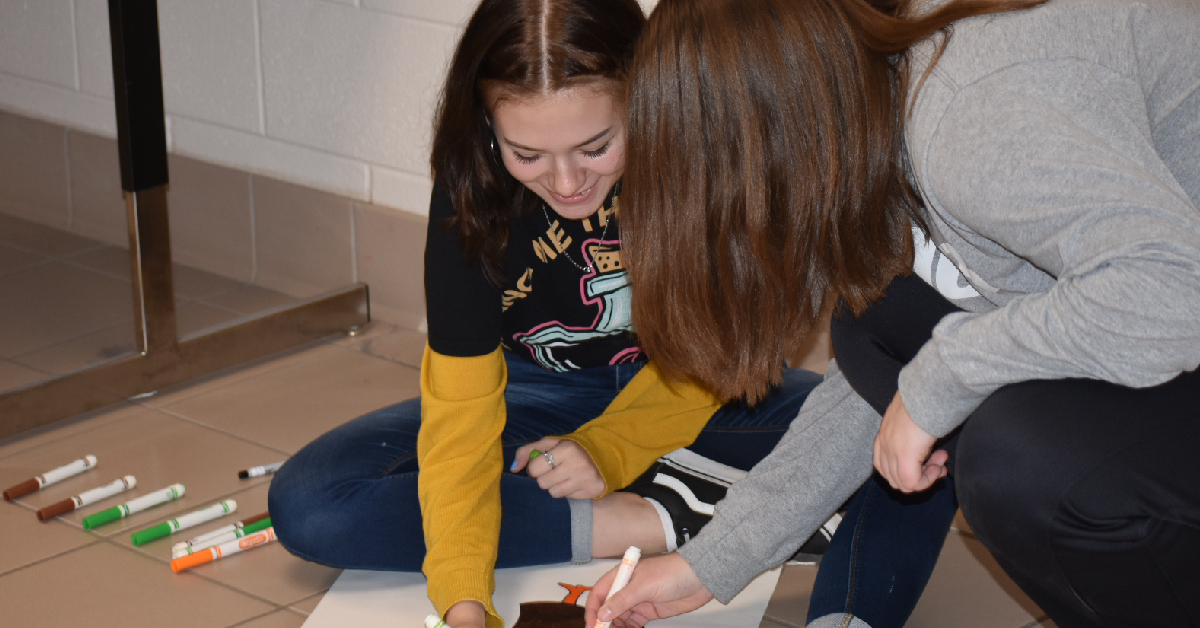 Homecoming is all fun and games, literally, but it is also an extreme amount of work. At Washington Township High School (WTHS), the student council organizes homecoming and the Vice President, senior Allanna McGuffey, takes point. With the help of the Homecoming Committee, McGuffey is charged with planning dress-up days, decorations, and the games. With the long-awaited game against Boone Groove this coming Friday, December 6th and the dance the next day, the homecoming festivities are in full swing.

To make homecoming more than just a basketball game, activities during the week encourage all students to participate and get excited. Student council tallies points for each of the four grades to crown one class the champion of homecoming week.

Along with dress-up days and mini-games, each class has to design a huge banner to hang in the gym for the game. The banners allow for a little bit of artistic talent and creativity to be appreciated in a week dedicated to basketball. To fit with this year’s outer space theme, each grade randomly selected space-related movies as following: freshmen with Guardians of the Galaxy, sophomores with Wall-E, juniors with Chicken Little, and seniors with Star Wars.

Although the weeks leading up to homecoming are very tense and stressful for the people in charge, the payoff is worth it. McGuffey takes pride in her and everyone else’s hard work and appreciates all the commitment.

On November 11th, the Washington Township Middle School Drama Club put on a one-time show of Steven Frendrich’s Yearbook. The wholesome play followed along as a group of four students dove back through the yearbook and reminisced about all the good moments. As different spreads from the book came to life, the play reminded the audience to look back on the year in a positive way. Choral Director Janet Wade directed the play, choosing it for its relevant themes, rather than the humor.

The drama club did the entire show in just six weeks, an impressive amount of time for a production. According to the director herself, the best way to prepare for the show is to come to rehearsals prepared.

“If students come with their lines already memorized, that gives us more time to focus on blocking and staging techniques,” Mrs. Wade explained.

With a relatively young cast, Mrs. Wade put in a lot of work helping each and every student become comfortable with their parts. She said, “Honestly, the most rewarding part of this is seeing kids come out of their shell. Sixth graders blew me away with their confidence on stage.”

Returner to the drama club, eighth-grader Aaron Suprenat played one of the main leads and even doubled as a side character. When asked what his favorite part about the whole process was, he replied with the rehearsals. He then elaborated, “The first time doing my monologue, I completely messed it up. It was really bad. But, then I practiced and made it a lot better.”

Although it may be a smaller program, the middle school drama club is mighty. It teaches young teens how to come to events prepared and helps them improve their public speaking skills. Even more, the drama club gives students a chance to be a part of a production that is bigger than themselves.

The teachers at WTHS go beyond expectations, and some even beyond the walls of the classrooms. One teacher, in particular, is Barbara Rea, the biology teacher. Mrs. Rea instructs biology, anatomy, and environmental. Her classroom setting is engaging, ensuring that students not only learn but recall and apply information. Mrs. Rea takes advantage of the memory benefits of handwritten notes as well as labs, worksheets, and videos.

What makes students pay attention in her class is not her teaching style, however, but her personality. Mrs. Rea is extremely passionate about everything she teaches and her love for science becomes contagious in her classroom.

“My absolute favorite part of teaching is when I spark an interest in science for a student,” Mrs. Rea said. “Or, when students can link something from class to something in real life, like a place they’ve been to or something on the news.”

It’s for this reason that Biology II is her favorite class to teach. Since it is based on zoology, every student will find something that they are interested in.

Mrs. Rea shows the importance of science to real-life by exposing her students to countless different educational outlets. Not only does she orchestrate field trips to zoos and museums, but she has also taken summer trips with students to the Galapagos and Puerto Rico.

Mrs. Rea loves her students and wants more than just A’s; she wants to inspire them to care about the world they live in and give them the resources to make a change.

In such a small school community, the teachers and students create tight-knit bonds throughout middle and high school. Throughout high school, a student could have the same teacher every single year. This allows for a more personalized relationship between teacher and student. At Washington, students can opt to be a teacher aide for a class. The tasks can vary from running copies, grading homework, or even helping students.

Senior Ryan Manson had teacher Angela Bien freshman English and AP Literature and Composition. Manson noted that one of the benefits of a small school was that close connection to his teachers. Manson respects Mrs. Bien very much and wanted to return his appreciation by helping her during her freshman English class.

When asked why he chose to teacher aide for Mrs. Bien, he said, “Well I recognized that she always had a lot going on teaching different classes and being a cross country coach, and I wanted to help her out in any way I could.”

Manson’s daily tasks include a lot of busywork, which he thoroughly enjoys. “Running a lot of errands oddly makes me feel very productive and it gives me something to do,” he explained.

Mrs. Bien is thankful for Manson because, “He is always willing to do whatever I ask of him and he is very reliable.”