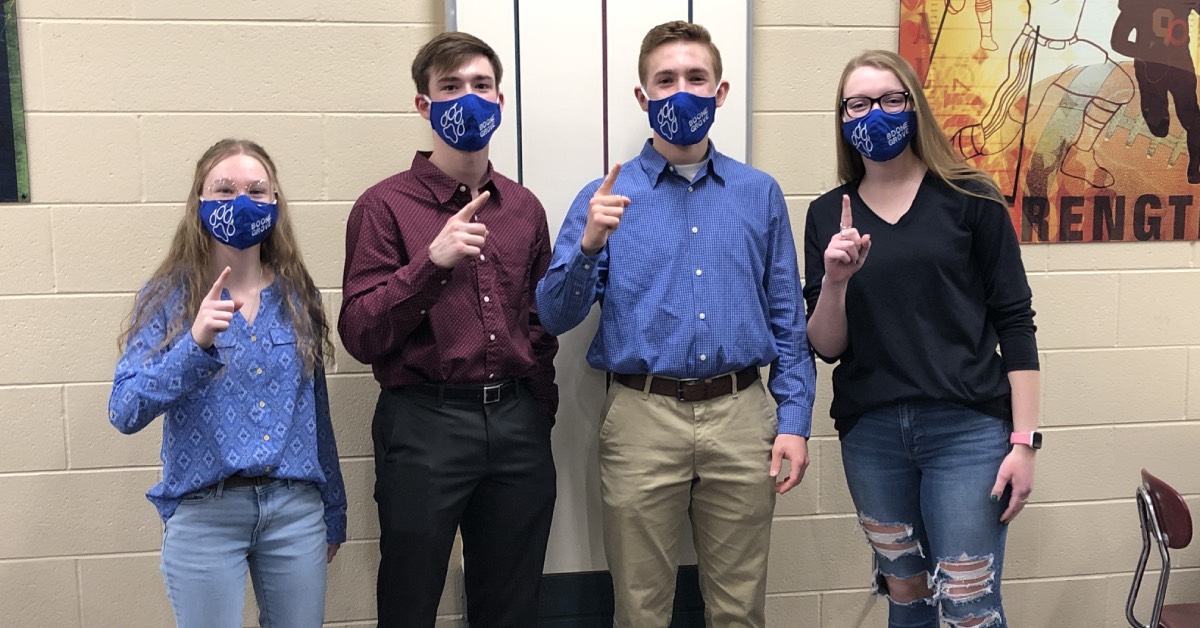 Each year, Boone Grove creates five teams of students. These students will study and eventually compete in a PCC (Porter County Conference)tournament against other schools in a series of questions. A topic is given to the schools with a list of material that they should study. This year, the topic was women’s suffrage.

Usually, this competition is held in-person with all the schools present for one big meet. Due to COVID-19, Boone Grove opted to have a virtual meet. On March 18, the teams gathered in the school cafeteria for the first meet.

The teachers in charge of the meet would play a video of the administrators asking the questions. The principal, Clay Corman, would enter the student’s responses onto an answer sheet and submit them to the committee.

The first team to compete was the English Team, which included three members: Kyle Casbon, Ryan Pierce, and Maggie Andrews. The English team ranked third with missing only three questions.

Since the topic this year was women's suffrage, the members had to read many pieces of literature that corresponded with the theme. The students read The Joy Luck Club by Amy Tan and the play A Raisin in the Sun by Lorraine Hansberry, along with multiple poems such as “Still I Rise” and “Phenomenal Woman” by Maya Angelou.

Also, the students read the short stories “A Good Man is Hard to Find” by Flannery O’Connor and “Everyday Use” by renowned author Alice Walker. The numerous works kept the students very busy in the weeks leading up to the meet.

The Science Team is made up of three members as well: Roger Anda, Maia Obrochta, and Ty McCoy. To prepare for the competition, these three read through many articles on the internet and read the book Silent Spring by Rachel Carson.

Senior Roger Anda discussed what kind of subjects the science section of the competition included.

“Some of the topics we covered were semiconductors, emulsions, star classification, viruses, magic numbers, and things over Silent Spring,” said Anda. “We were prepared for almost everything.”

At the end of the competition, the science team came in first place.

The Social Studies Team is made up of three members: Zane Rayson, Annika Greinke, and Hayden Neis. This year, the team focused on one main book: The Woman’s Hour written by Elaine Weiss.

“The book is about the trial held in Tennessee, the one for the ratification of the 19th Amendment,” said Senior Annika Greinke.

Overall, the team placed fifth in the competition.

The Math Team has four members: Kyle Casbon, Ryan Pierce, Jessica Agonis, and Marion Brown. The team had numerous practice problems to work with to prepare for the meet.

The team studied subjects such as analytic geometry, programming, probability, and algebra. Overall, the team was fairly confident in their abilities, and at the end of the competition, they joined the science team with a first place win as well.

Since the meet was at the school this year, Senior Marion Brown shared how this year’s competition compares to previous ones.

“It was definitely different to be at our own school for a competition rather than somewhere else. It's almost a little more relaxing because it's a more familiar environment for us,” said Brown.

The Fine Arts Team has four members: Amy Swenson, Emma Grant, Nicole Hampton, and Jack Lucas. The team proudly placed first in the competition. The members studied female artists from many genres, and some examples were songs by singers such as Billie Holiday, The International Sweethearts of Rhythm, and Leontyne Price. The songs were written and performed throughout the 1900s.

At the competition, the students were asked questions on musical structure, composition, and biographical information on the artists themselves, and the students had to be able to identify the artists from sample material.

Junior Nicole Hampton shared her perspective on the task at hand.

“Although being on an academic team can be super stressful and overwhelming, it's totally worth it!” said Hampton. “Learning things that you would never otherwise even think to look up has been an incredibly rewarding experience.”

The Interdisciplinary Team had six total members: Kyle Casbon, Ryan Pierce, Zane Rayson, Amy Swenson, Emma Grant, and Maia O’Brochta. The interdisciplinary team has members from each of the other teams because that section of the competition has questions from all of the separate subjectscombined. At the end of the meet, the team receivedsecond place.

All of the teams worked very hard for this first meet of the year and Boone Grove High School is proud of all the members who competed. The next meet for the academic competition will be held on Tuesday, April 20.