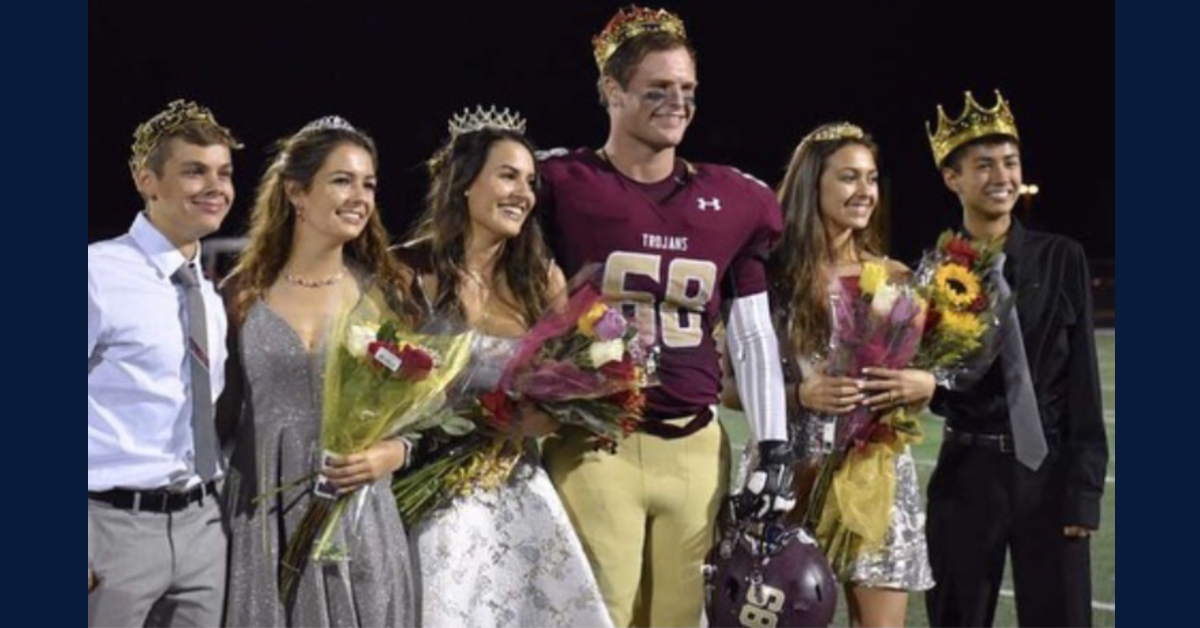 “Alex and I have been dating for almost a year, so it was perfect getting to share such a memorable experience with him and knowing we accomplished it together,” Hood said.

Giselle and Alex broke the normal CHS tradition by openly campaigning for their titles. The duo passed out candy and cookies with their name on it while also hanging posters around the school.

“I decided to campaign with the hopes of spreading school spirit and just getting the word out there,” Hood said. “I thought, ‘it’s my senior year and if I’m running, I’m going all out’.”

It’s normal for anybody to feel the buzz of anticipation when something important is coming up, but this anticipation is multiplied when standing in front of filled bleachers in the hopes of winning a high school prestige.

“I think there’s always a little bit of doubt in you before something big like that, and you don’t want to get your hopes up too high,” Hood said. “We knew that we had put our all into it, and that was really all we could do.”

Giselle and Alex made headway within the CHS walls by not only campaigning but also bringing the school together to help make a couple’s dreams come true.

“The entire experience was so incredible,” Hood said. “When she finally set the crown on my head, that’s when I think it really sunk in. Homecoming Queen has been such a dream of mine since I was young, and to finally have it come true is more than I could’ve asked for.”

“The community has really come together to support Alex and me,” Hood said, “and I’d like to thank everyone from the bottom of my heart.”

“The turnout was great, it was one of the largest parades we have ever had,” said Assistant Principal Robert Blumenthal. “There were 57 entries and some of those entries included multiple floats. We had a number of athletic teams, as well as extra/o-curriculars not only from the high school, but from the middle school, Westchester Intermediate, and Yost Elementary for the first time. We had a number of local businesses join the parade as well.”

The parade was a chance for the community to see and support all parts of the CHS student body.

“I like the parade because it really brings the town and community together,” Blumenthal said.

With the 57 parade entries, every participant and audience member was bound to have a few favorites.

“A few favorites of mine were the girls volleyball team,” Blumenthal said, “I also really liked the giant soccer balls the soccer team did.”

There are still many opportunities for communities to get involved and view all the clubs and organizations that CHS has to offer.

“The Halloween event that is hosted by the student government is another opportunity to support all of these clubs and the school itself,” Blumenthal said.

English teacher Jennifer Jendrzejczyk has recently taken on the role of yearbook advisor, while still maintaining many other administrative roles for clubs and events.

“I am also the prom coordinator, spell bowl coach, academic super bowl coach for Fine Arts and English, and class sponsor for ‘22,” Jendrzejczyk said. “Last year, I gave up being the student government advisor, so Mr. Martinson suggested that I try yearbook.”

While becoming the advisor for a class is always a new way to get to know students, it can be hard for the students and teachers alike to adjust to the new setting.

“It’s been a little bit of adjustment because we have to get used to doing things in different ways,” Jendrzejczyk said, “but we are beginning to settle in now because we are six weeks in, so I think things are starting to go a bit better as we start to understand expectations.”

A class such as yearbook is a bit harder to teach because it’s not like other classes that have a set curriculum.

“It’s definitely a challenge. It’s not an easy class to plan for, because you can’t plan for the class until you get to know the kids and each student’s individual skills,” Jendrzejczyk said. “It is a different class because the size of the class is much smaller, allowing for one-on-one assistance, but it also can’t be planned out with a curriculum like my other classes because the curriculum has to fit the staff in a very specialized way.”

There are many things for the yearbook staff and the advisor to look forward to as the school year begins to pick up pace.

“I am very excited about the whole year. We just celebrated a birthday and our EIC brought in cupcakes, and I brought in ice cream,” Jendrzejczyk said. “This was a great way to build a team culture, and I like getting to know the kids individually, which is an opportunity I don’t get in most classes.”

“This event is a crossover of sketch comedy and a talent show, so there is a talent show and between the acts, the speech and debate students have written skits, similar to Saturday Night Live,” said Speech and Debate Advisor Dakota McCoy.

The event serves as a fundraiser for the speech and debate club.

The variety show is not only bound to provide entertainment for the whole family, but is sure to have plenty of people laughing hysterically at the students’ sketches.

“I am excited for the big reveals and sketches. There are a lot of surprises and twists and turns that people are going to find funny,” McCoy said. “Overall, I am excited to bring back an event that stopped about 15 years ago, that the entire community attended.”

This fundraiser is sure to have a big turnout, but the speech and debate club is currently running another fundraiser as well.

“Playbills from the theatre productions have ads which we are actively selling,” McCoy said. “If you are interested in supporting the team you can send me an email.”

This event is not only a community event, but also a competition.