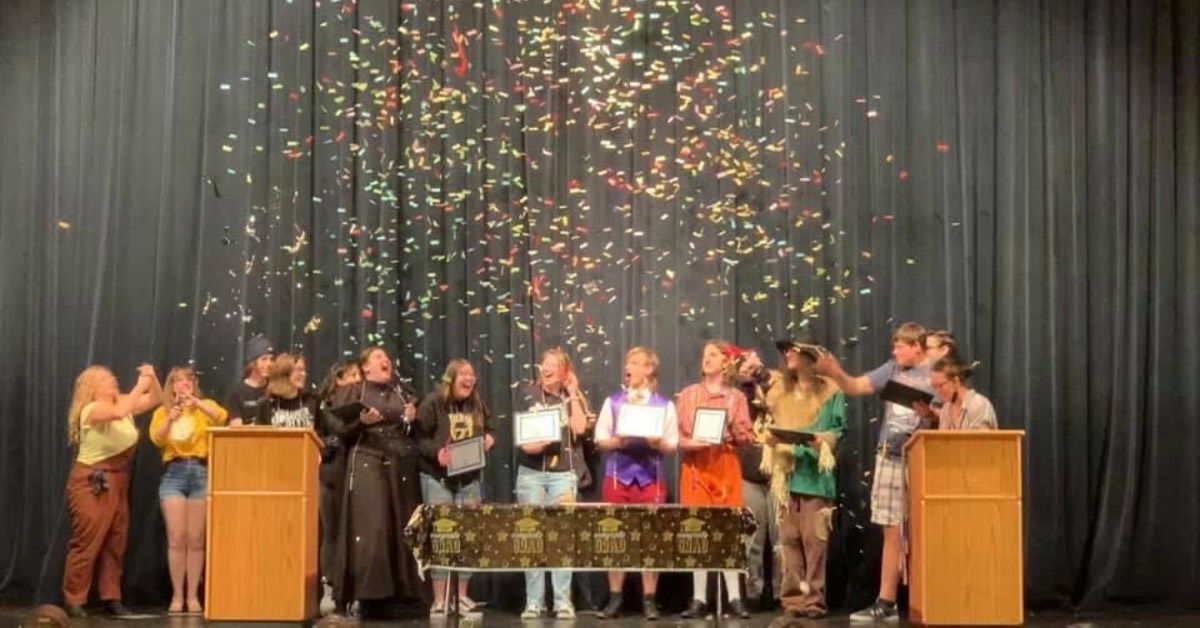 During the 2020-21 school year, things have changed drastically for those involved in extracurricular activities. COVID-19 has been no stranger to Boone Grove High School, but students manage to make the best out of the situation.

With the school year coming to an end, the drama club prepared to put on their last production of the year. In past years, the drama club has honored graduating seniors after the final production of the spring musical. This year was no different as eight graduating seniors were honored including Roger Anda, Blake Anderson, Maggie Andrews, Logan Barton, Catrina DeLeon, Emma Grant, Annika Greinke, and Amy Swenson.

This year, Boone Grove High School established a thespian troupe. The troupe inducted members into the International Thespian Society (ITS), which is an honorary organization for high school students involved in theater and honors achievements in theater arts. Senior members received a graduation cord in honor of their work in the club, of which they will wear with pride at their graduation.

The ceremony in which the students signed their allegiance to the troupe was held at the end of the closing night of production for the musical. Students recited the ITS pledge and received a certificate symbolizing their initiation into the troupe. To the seniors, it was an incredible honor to be one of the first Boone Grove Thespians. Juniors were also able to become thespians as well after the seniors.

The drama club’s final spring production took place on April 30, May 1, and May 2. It was one to remember for the seniors and all other students, but was especially bittersweet for the seniors who had to say their last goodbyes. Students were no strangers to teary eyes throughout the production days as the seniors started to miss the club before they even left it.

The musical was “The Wizard of Oz,” which held the largest cast in Boone Grove history. The high schoolers invited middle school students to be cast as the munchkins for the musical. The middle schoolers were elated to be a part of the cast and participate in the musical, inspiring a few to take up drama once they enter high school.

To prepare for the musical, students had a lot of work to do. There were entire new sets that had to be built and painted. Usually, the drama club tries to reuse as many old props as possible to conserve spending, and this year the team did extreme makeovers on the props. An entire scene was repainted from previous years to be the front of the Emerald City gates, a massive green wall was painted by the students, and signs were erected with beautiful calligraphy. The yellow brick road leading off of the stage and into the audience added to the atmosphere. All of the work the students put in paid off.

In addition to prop and scene development, the students worked incredibly hard on song production and musical choreography. The actors and actresses spent many hours creating and mastering several songs and dance scenes which added plenty of entertainment to the production.

During the musical, members of the audience heard famous songs, such as “Somewhere Over the Rainbow.”

The lead cast consisted of the following students:

Annika Greinke – The Wicked Witch of the West

All of the leading roles worked incredibly hard on the musical and put in copious hours of work each week to be ready for the production. The week before opening night is infamously known as tech week in which students do run-throughs and dress rehearsals of the musical. Some students will be at the school for upwards of 13 hours a day preparing for the show.

Through this show, students showcased their tenacity, dedication to the club, and ability to put on a good show. Although it may have had a rough start during tech week as things were falling a bit behind schedule, it all turned out okay.

Junior Savannah Eckhardt shared her perspective on the preparation leading up to the production.

“This show made me question my sanity, but we somehow pulled it off,” said Eckhardt.

Within all the chaos that the students have endured, they have put on a fantastic show that the audience enjoyed. Children laughing in the audience and getting chuckles from the adults were a great motivator for the students, encouraging them to continue the show with their best foot forward.

The drama club had sold out tickets for all three days of the musical production for the first time at Boone Grove.

Since seating was in-person rather than having a virtual audience, seats had to be reduced to make sure that they were following the COVID-19guidelines. There were, of course, sanitizing stations and sterilization of the seats after every show.

The drama club is incredibly thankful for all of those who attended the shows and helped out the club. They hope that with the money earned, they will be able to acquire new technology systems to make sound and lighting easier for upcoming shows and for younger students who are taking after the seniors.

Once again, congratulations to the drama club and graduating seniors!