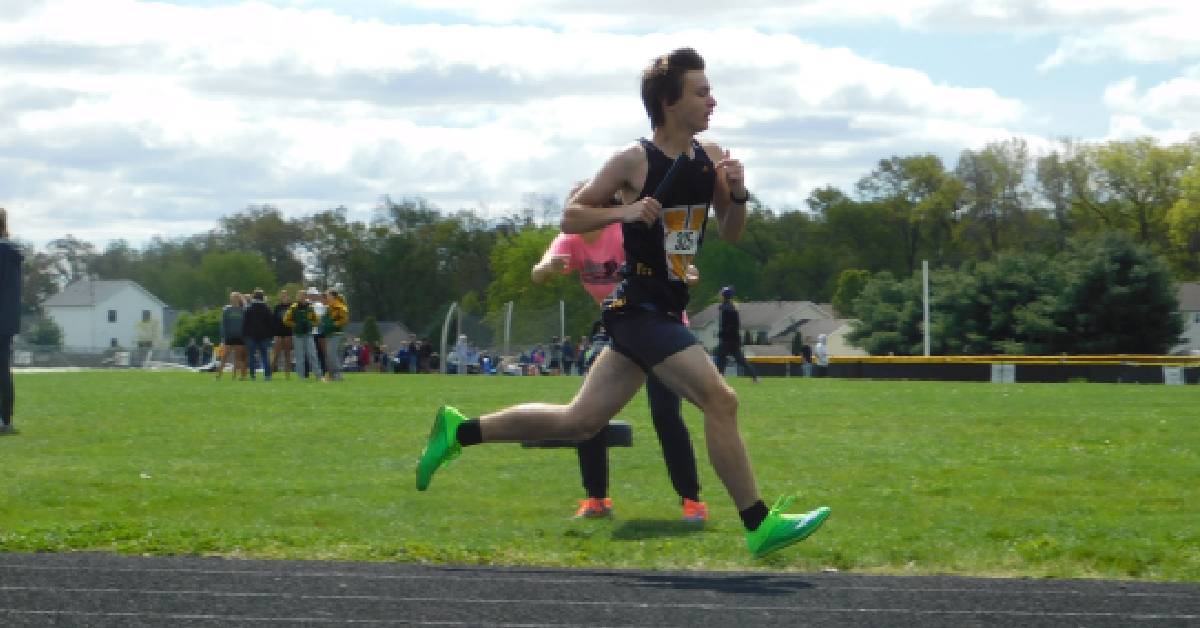 The Kouts High School Track & Field season has recently come to an end. The team has accomplished good things this year as the girls placed first at the Porter County Conference (PCC) tournament, and the boys placed third. No matter what place the team is in, though, they all keep their team spirit high and have fun while competing.

When he’s running, Palmer says that it is the best and worst feeling in the world. He loves the feeling of accomplishment when he finishes his races, even if he doesn’t place. Palmer’s running style is aggressive; he always pushes himself to pass the person in front of him, no matter how far ahead of him they are. While he’s competing, he doesn’t think of anything, he just tries to push himself as best as he can.

Palmer also enjoys cheering for everyone. This includes people who aren’t on his team as well. Members of Kouts who go to the track meets know that if they hear someone cheering, it is most likely Palmer.

“There’s nothing more satisfying than being a step ahead of somebody that ‘should’ be beating you,” said Palmer. “When I’m behind somebody and know that I can pass them, that’s when I reach my personal records.”

Kouts students are holding on for a few more days as the school year is coming to an end. The last day of school is May 26, and students are excited that it is a half-day. A few people have plans over summer break, but everybody just can’t wait to relax in the summer heat.

One student is excited to finally be able to destress, while another is looking forward to relaxing by their pool in the hot sun. Some students are going to places even hotter than Kouts has been lately, such as Florida.

Students say that this year has been a very interesting one but they are glad they got to make it through the school year without being completely online. Everyone is happy that this school year had most, if not all, of the characteristics of a “normal” one. Students got to enjoy prom, homecoming, and best of all, graduation.

There are a lot of teachers at Kouts that enjoy making connections with their students, but Katie Goldbranson is one that truly stands out.

Goldbranson grew up in Berwyn, Ill., a suburb of Chicago. She attended Valparaiso University for her college degree where she was a student teacher for Kouts High School English Teacher Elizabeth Chatwell. Goldbranson was a senior in college when she first became involved with Kouts High School. Now, she has come back and has been teaching at Kouts for three years. Goldbranson currently teaches eighth grade English, high school speech, and yearbook.

Some of Goldbranson’s favorite things are Harry Potter – and books in general – musicals, traveling, her cat Sybil, and talking to her students.

Students love being in her class as they know that her classroom is an environment that they can feel safe and comfortable in. One student that has been enrolled in Goldbranson’s classes for multiple years of their high school career is a Junior Kaitlynn Ready, who had some things to say about Goldbranson.

“I feel so comfortable in her classroom,” said Ready. “I know I can always talk to her if I need something, which makes her class even better!”

One student at Kouts that is very involved with the student body and her community is Lyndsey Kobza. Kobza is ranked fourth in the junior class and has a grade point average of 3.9. She has also been inducted into the East Porter County Honor Society this year and has been involved in student government since her freshman year.

As for volunteer work, Kobza has helped out with Student Government fundraisers and peer tutoring. She helps underclassmen with their homework every week during her student resource time.

Kobza’s hobbies include watching movies, playing sports, and hanging out with her family and friends. She also has a dog named Bella who she enjoys spending time with.

As Kobza is taking the health science vocational next year, she hopes to use that experience to help her find a job in the medical field.