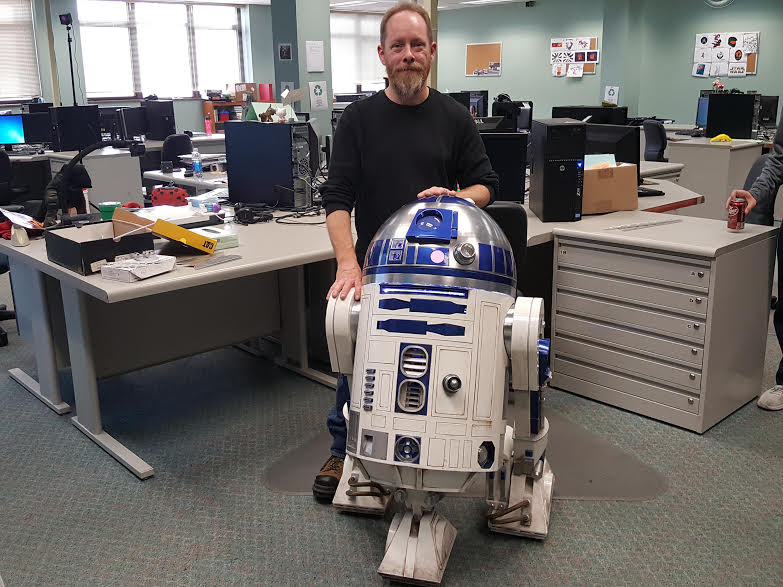 What’s Happening
The five electronics students at PCCTC wrapped up their robotic competition after six months of hard work. Originally, when the competition started, there were 52 teams working on robots. The team started in October at Purdue when they came up with their original robot and placed in the top three, allowing them to move on to nationals. The contest was called the “National Nanoline Technology Contest” and was hosted by Phoenix Contact. This contest has been put on for nine years now. At the national level, only eight teams remained. The project that the career center team had was a “souped up” go-kart. They bought a cheap go-kart intended for children and took it to the next level.

Originally, the kart could only go in forward and was very slow. The team wired the kart to go in reverse and to go two more speeds that were faster than the original. While they were at Phoenix Contact, the team got a tour of the plant and saw how everything worked. Unfortunately, the team didn’t place in the top three but it was a great experience for them.

The Health Occupations class has also finished something they have been working on for a while now, their Certified Nursing Assistant licenses. This month they wrapped it all up and took their big test. Students studied and tried their best. To pass the exam, students had to get above an 80% on the written exam. They also have to take a skills test based on the resident care procedures. After the written test, the teachers graded it and announced to the class that everyone passed.

The CAD class had an interesting visitor this month. The class had invited Aaron Treble and his astromech droid, R2-D2. Aaron started out going into the Air Force working on fighter jets and studied electronics. After that, he decided to work for United Airlines in O’Hare. Within a short amount of time he realized that wasn’t what he wanted to do. He did know that he loved building things and that’s exactly what he did; he built a R2-D2 replica. He downloaded a CAD program and got to work. He taught himself how to use CAD and used the help program on there when necessary. He noticed that when people tried making these droids, they couldn’t construct the feet so that is where Aaron decided he would start. He designed it on a software, had it shipped to Big Blue Saw, got the pieces sent to him and self- taught himself to TIG weld the pieces together. The droid weighs 250 pounds, it took two years to build and cost him $15,000. Aaron brings R2-D2 to schools and other places to show both kids and adults. 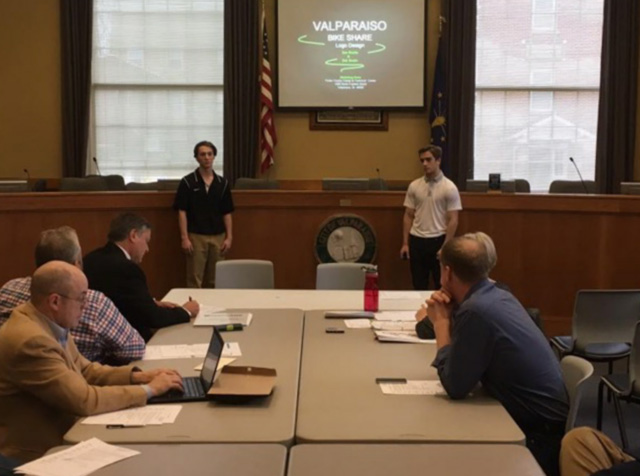 What’s Coming Up?
The business class has been working on a project given to them by the Valparaiso Economic Development Committee.

The marketing team had a plan to start a bike sharing program similar to Chicago’s bike share called “Divvy”. They already knew how many bike stops they would have and roughly where they would be but they wanted the students to do the rest. Within the first couple of weeks, students in the class came up with potential names for the bike share and a logo to correspond with it. Teacher, Ms. Ammons, picked a few students who she felt would succeed and present well to the representative. The students she chose were Zak Smith of Chesterton High School and Zac Beatty of Boone Grove High School.

Smith and Beatty, along with the help of Ms. Ammons, looked through their classmates ideas for names and designs, as well as their own and picked out the ones they felt were the best. After they chose a name and a design, they showed it to the bike share representative. He took it to his marketing team and told the students how it could be improved. After a few months of this process, the team decided they wanted the name to be Valpo Velocity. Then, Smith and Beatty brainstormed ideas for the logo. After they had the logo and the name, they took it to the city.

They presented their ideas to the Economic Redevelopment Commision in the City Council Chambers. There they spoke to people such as President Rob Thorgren, Vice President Rick Urschel and many more.

The committee loved the ideas and had approved of the name, logo, colors and placement. Zak and Zac will have the opportunity to be at the ribbon cutting and “roll out” of the bikes. They will be riding bikes with Mayor Jon Costas. 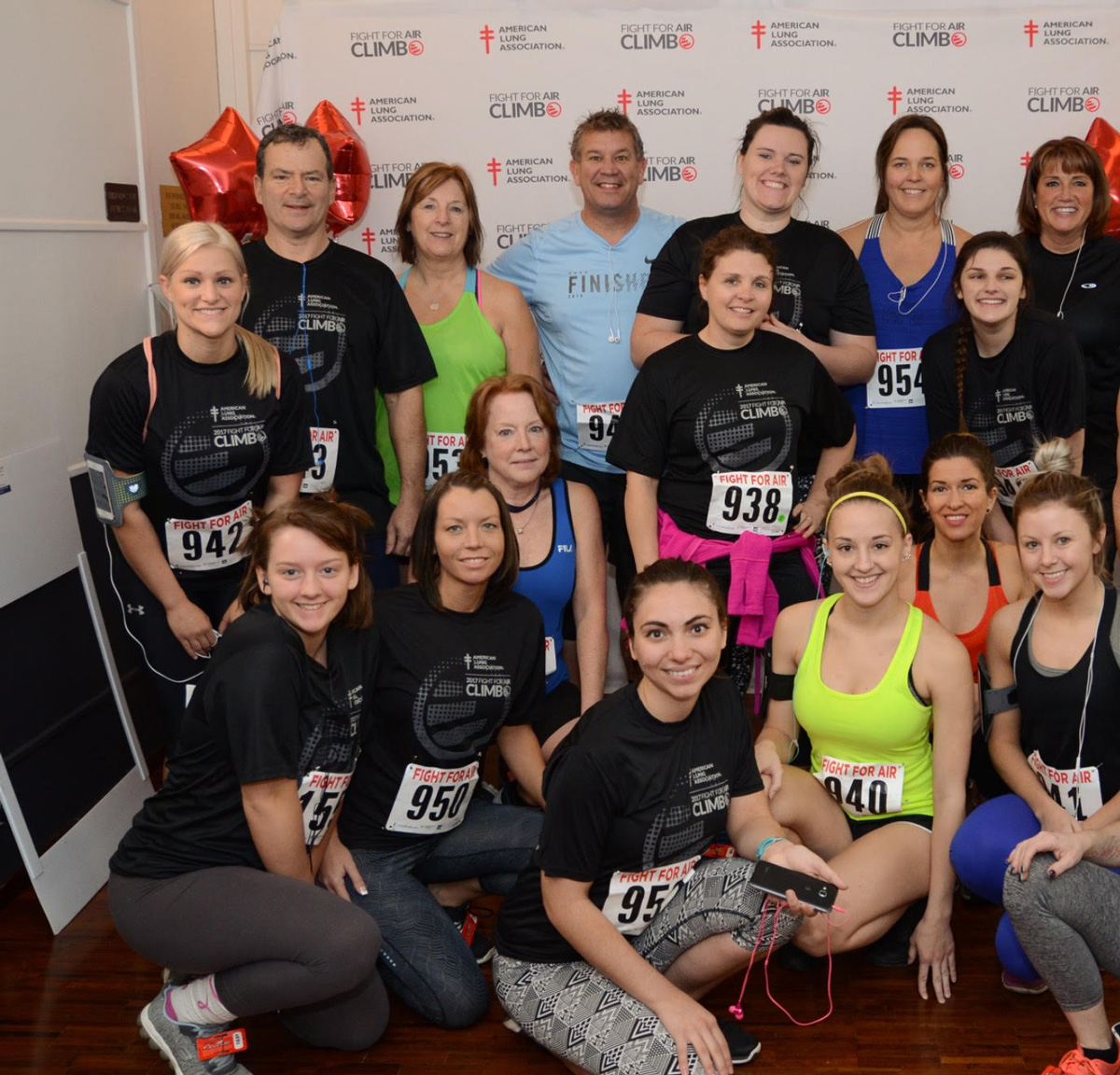 Teacher Spotlight: Ms. Marcus
If you see a teacher in scrubs with a cup of Dunkin’ coffee, there’s a good chance it is Ms. Marcus. Ms. Marcus is one of the Health Occupations teachers at the Career Center.

Ms. Marcus’ journey to the medical field started early on. Both of her parent worked in health care. Her mom convinced her to get her CNA license. But before health care, she studied to be a teacher. Then she studied pediatrics. Then finally, she made her way to the Career Center. Here at PCCTC she helps students get their CPR certification as well as their CNA license while still in high school.

“I think learning the skills that a CNA has will make you a better health care worker. Working with students to get their CNA license I think is the most important step in their career path,” said Ms. Marcus.

This is Ms. Marcus’ sixth year at the Career Center and has helped pave the way for many students future careers.

“My favorite part of teaching is to see the changes and students and the skills they develop,” said Ms. Marcus, “To see them accomplish so much and understand the importance of what they are doing is exciting and inspiring.”

Recently, Ms. Marcus participated in the Fight For Air Climb in the Chicago Presidential Towers sponsored by the American Lung Association. This is a very long race and can be challenging for many.

“I enjoy challenges. I like to set a goal and accomplish it. Also, my mom has pulmonary fibrosis. I like to volunteer and support causes as much as I can,” said Ms. Marcus. 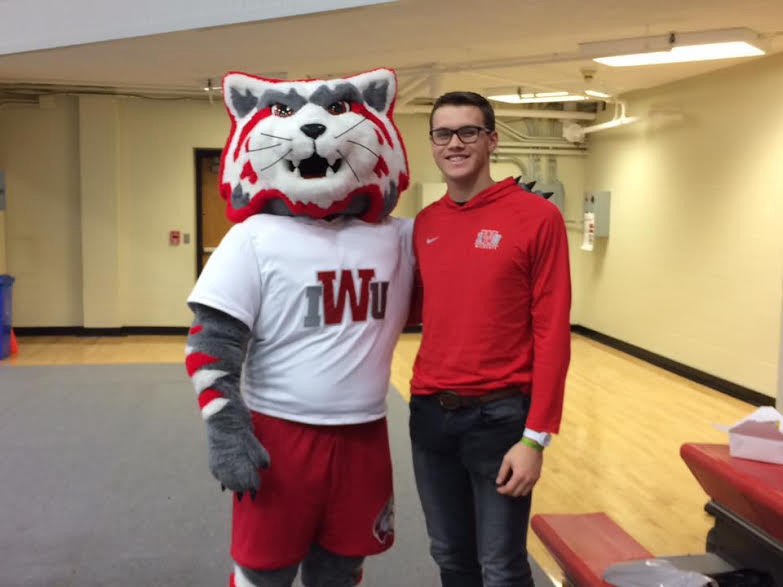 Student Spotlight: Derek Lasky
Derek Lasky is a born leader and shows his leadership skills in class. Early on the class elected Derek has the class president. He has also been manager of Snacks by the Tracks, the school store, multiple times.

“I chose the ESEM class at the Porter County Career Center because my biggest dream growing up has always been to work in the front office of a MLB team. When I was told about the opportunity to begin my education in the sports field a little early, I jumped all over it immediately and signed up,” said Derek.

A few months ago, the class went to their district DECA competition at Hobart High School. Derek competed in the Sports and Entertainment Marketing cluster. At district, he placed in third which had qualified him to compete at the state level in Indianapolis.

“My DECA adventure was absolutely amazing. DECA was everything I thought it would be and more,” Derek said. “Being the competitive person I am, I loved the challenge of competing in a competition involving my passion of Sports Marketing.”

Not only is Derek exceptional in the classroom, he is a great baseball player. After high school, he will be playing baseball at Indiana Wesleyan University. He will also be double-majoring in Marketing and Sports Management. His dream job is to play baseball in the Major Leagues. He would also like to work as a Baseball Operations Executive for a MLB team or university.