What’s Happening?
Need a tutor or want to be a tutor? You may be able to tutor or be tutored during your lunch period for a variety of classes. Talk to the counselors about it, they can help you out!

Cameron Jones ran a 17:44 at sectionals for cross country on Saturday, October 8th at Sunset Hill. Great job, Cameron! His next stop was regionals, which was at the New Prairie course on October 15th.

Anime club has begun! Think you’d be interested? Join! Meetings are in Mr. Lozano's (which is Mrs. Sarnowski's) room after school from 2:45 to 3:45.

The annual fall choir concert is coming up! Get ready to be spooked by your favorite songs such as: "Ghostbusters", "The Ballad of Sweeney Todd", and "I'm in Love With a Monster". The concert will consist of performances by the middle and high school choir. The fall concert date is set for Monday, October 17th.

The PSAT/NMSQT is scheduled for Wednesday, October 19th. If you signed up to retake, or are required to take it, good luck! If you are retaking it, you have the opportunity to receive a National Merit Scholarship.

Heard about Gay Straight Alliance? It’s where people come together to appreciate and support one another. Anybody is invited! Meetings are every other Thursday (October 20th is the next meeting), in the art room after school. Curious and want to join? Show up to a meeting or ask Emma Awdey for more information.

The first french club meeting will be held on the 25th of October in Mrs. Korell's room after school.

What’s Coming Up?
The Boone Grove girls varsity volleyball team won their PCC match on the 14th of October! Great job, ladies! They will be moving on to sectionals, which will be a home game on October 18th.

Make sure you comb your hair and smile wide because picture retakes are the 26th of October! The announcements will call groups of people down to the auxiliary gym during the day if they want to receive picture retakes.

Bring out those sweaters and smell the pumpkin spice! Fall break is soon! It will be from the 27th through the 30th (including the weekend days).

The annual Fall Sports Awards ceremony will take place in the large gym of the high school on November 1st at 6:30. You may have to be there earlier, depending on what time your fall coach wants you to be there. There, the fall sports will be honoring their season and will be giving plaques to some players on their teams. There are normally three plaques: Most Improved, the Wolfie Award, and MVP.

Natural Helpers is coming fast! If you were invited on the fall retreat, congratulations! Mark your calendars because the natural helpers are leaving after school on Wednesday (November 2nd) and will be returning halfway through the day on Friday (November 4th). 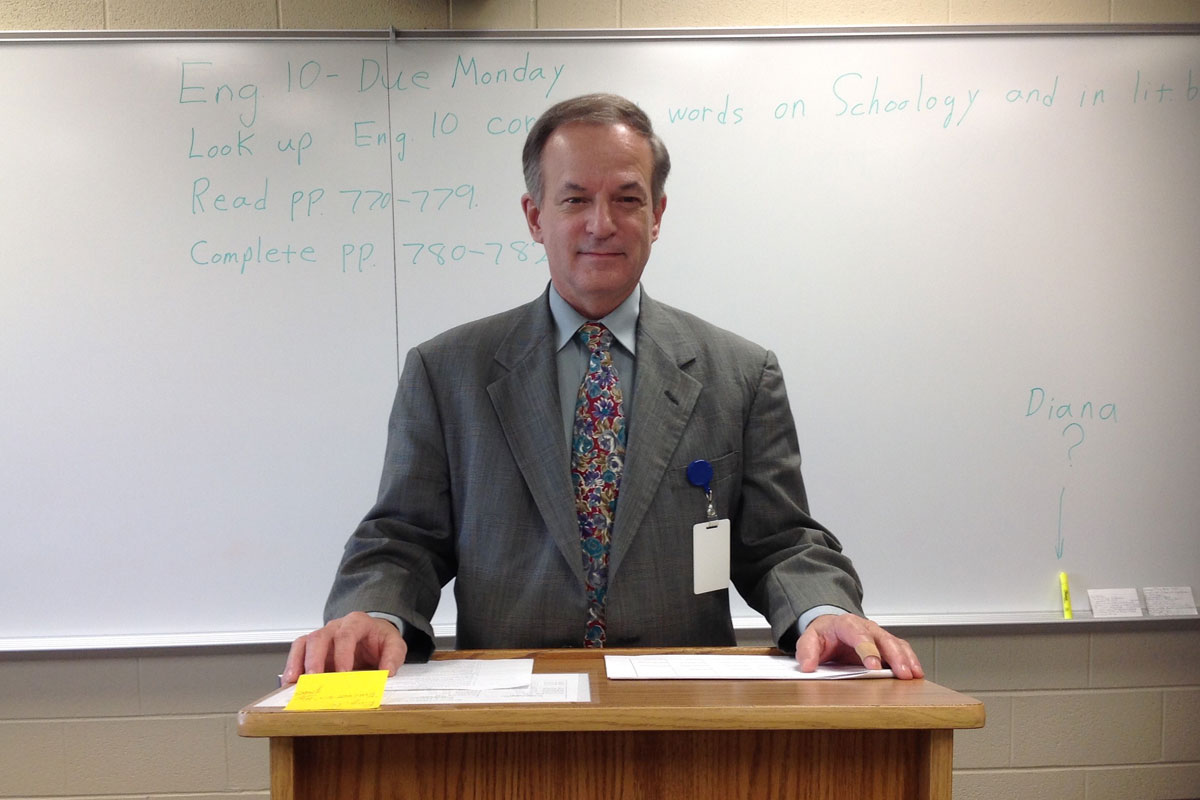 Teacher Spotlight: Mr. Michell
Mr. Michell is a Boone Grove treasure. He has taught for about thirty-nine years and has influenced all that have gone through, and who will go through, the Boone Grove system. Mr. Mitchell is a genuine teacher who would do almost anything for his students. His presence in a classroom truly reveals how affectionate he is towards his career.

Mr. Mitchell provides an inspiration to all his students surrounding the language of English.

"I hope I inspire [my students] to realize that the command of language can change their life. It can be minor or major, but the major part is of how we connect with each other. Learning how to successfully manipulate the world of language is a foundation to everything else we do. How else do we communicate if not by words.”

Mr. Mitchell explained to me an enticing story connected to his idea of creating an environment in his classroom: "One of the best stories was when I was a student teacher. I walked into my very first class full of seniors that had a reputation for having discipline challenges, to say the least.

“The teacher wasn't there, she was in the hall talking for a few minutes. I introduced myself, but it didn't make any difference to them. They kept talking and joking and pushing around, so I told them to have a seat, but they didn't. I said, 'Have a seat, or there's going to be a problem,' and they started laughing. At which point the short little teacher walked in who was about 4'8" on a good day said, 'Sit down,' and they all sat down. She patted me on the shoulder and said, 'That's how you do it.'

“I realized then, that it wasn't the words that she had used, but it was the environment she brought with her that the students had learned to adapt to. I think as a teacher, you have to establish an environment. If the students learn the environment, then you're doing the right job. If they're not learning, then you haven't done your job as a teacher to establish the environment in which they're motivated to learn, they want to learn, or they force themselves to learn. By one way or another, their success has a lot to do with the world you create inside the class."

Overall, Mr. Mitchell is someone that truly cares about others. We love experiencing his elegance of teaching at Boone Grove.

Student Spotlight: Natalie Kovacik
Natalie Kovacik plays volleyball and tennis every year. She is involved in key club, national honor society, cadet teaching, and she is an active member of the senior class meetings. She is looking forward to joining our school's gay straight alliance soon. Natalie is also currently holding the class rank of number one among seniors. You go, Nat!

Besides her academic excellence, Natalie is a student that continues to contribute to Boone Grove in many ways. When asked what she's looking forward to her senior year, she responded with her love and support for sports, saying that she hopes to attend more games.

When asked for tips on how to stay positive, Natalie proudly said, "I think it takes a conscious decision to just decide that you want to be positive. You want to smile at more people, you want to say things to people that you would like them to say to you. If you're having a bad day, you would want someone to compliment you, or just do something to brighten your mood. I try to do that to other people, and then people will do it back to you. Everyone is just overall happier."

Natalie would like to thank the school staff, administration, teachers, and everyone because she truly believes that Boone Grove has the best. All of them try to do what they can for their students. Boone Grove is lucky to have teachers who are supportive and are always working to make our lives better. 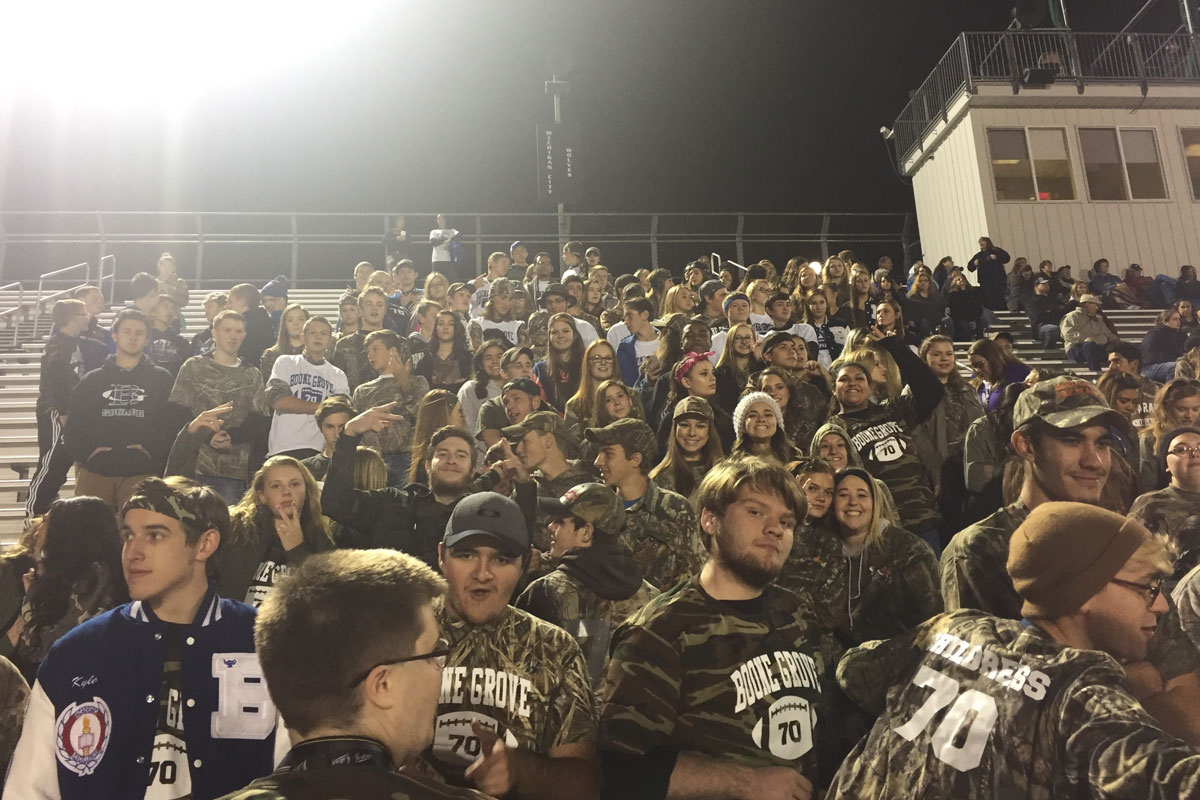 In Memory of David Childress
It was a blessing being able to know David Childress. He played football, guitar, pole-vaulted for track, and contributed to the human race in so many other ways. David Childress positively impacted every person he came across.

It was an unbelievable experience and a great honor to have David go to Boone Grove, allowing us to have his bright smile shine through the halls. We all loved him dearly, and we enormously appreciate everything he has ever done for us.

Boone Grove's heart goes out to David's family and friends.

At the football game on Friday, October 14th, Boone Grove wore camouflage in his honor.