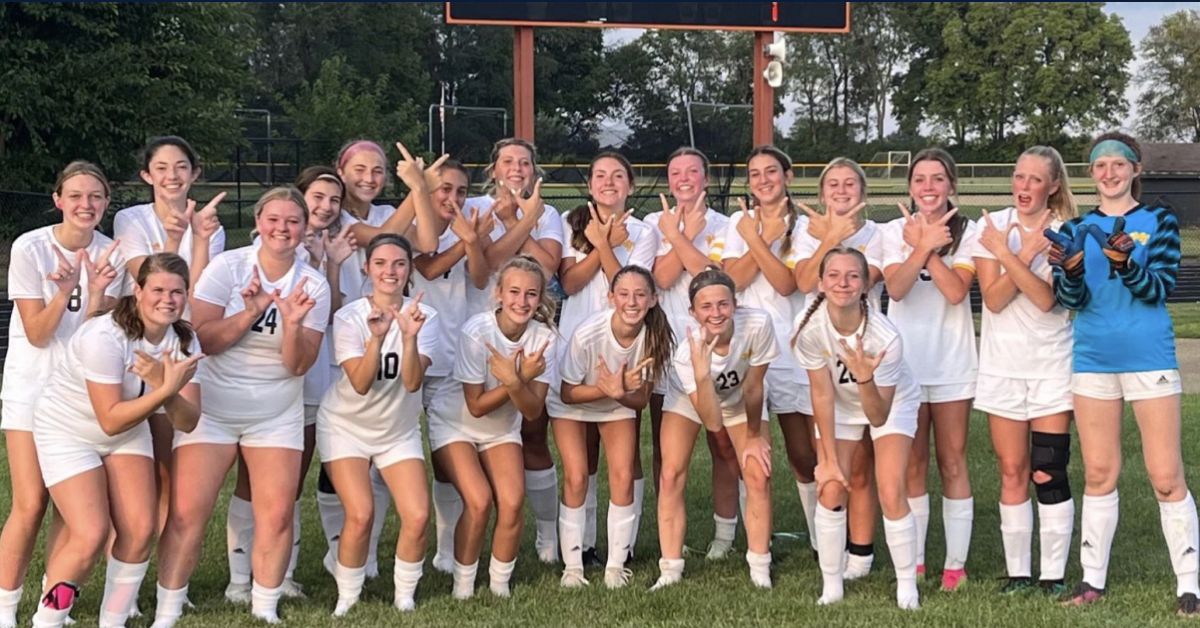 Over the past few weeks, both the boys and girls Morgan Township High School (MTHS) soccer teams have kicked the season off to a ferocious start.

The MTHS girls soccer team has made a few changes to the dynamic of its team including switching around positions and introducing a fierce new coach. Coaches Mel Parker, Michelle Smith, and new this year, Coach Jancy are determined to turn the girls’ soccer program around with hopes of making it through sectionals for the first time ever.

So far this season, the team has won five games against local school teams. You can see them play Marquette Catholic High School, September 29 at MTHS to watch as the events unfold on senior night.

As for MTHS boys' soccer team, the group has brought home victories of all kinds, making MTHS enthusiasts proud with an overall 3-1-win ratio.

Coach Steve Cuson has been preparing his team for the season, it’s clear the team is ready to give everything they have this season. As heard from many players, this year’s goal is to win back sectionals, and they are ready to do what it takes! Look out sectionals, MTHS soccer is coming for you!

“I have been physically and mentally training for sectionals this year along with my teammates," said Aidan Ilic, senior goalkeeper.

Troy and Maggie Quick are bringing Christian bands from all around to Morgan for the fourth annual Gospel Bowl!

Gospel Bowl is a free entry event hosting an all Christian and worship concert for anyone to enjoy. The outdoor concert is held on a property that resembles the shape of a bowl, the perfect formation for a concert such as this.

The Quicks have been hosting the event since the inaugural Gospel Bowl in 2018, except for 2020 during the COVID-19 pandemic.

The idea first started with a past owner of the property. Faye Hanna had the idea of hosting a worship-based musical event while walking in prayer along the paths on the property close to 110 years ago. Unbeknown to her, years later, the same string of events would occur. In prayer, Troy Quick was traveling along the same paths as Hanna when he felt God placing the idea of a worship concert on his heart. Together, both Maggie and Troy Quick acted and began the first steps in 2016 toward the Gospel Bowl happening year after year.

The Quicks were approaching the date they had set for the first Gospel Bowl with few arrangements. Though the situation was getting stressful, the Quicks decided that if this was really meant to be, that they did not need a budget. Through the loving community around them, musicians, sponsors, and culinary business owners came together to make the event happen. With donations ranging from a stage to holding a concession stand, the Gospel Bowl was a huge success, bringing in more than 500 attendees. Over the next few years, the audience size increased by more than 40%, bringing the latest Gospel Bowl to an astounding high of more than 700 attendees in 2021.

This year, the Gospel Bowl will be held on Saturday, September 24. Come out noon to 6 p.m. to 89 East 150 South with a friend and a camp chair to enjoy the enriching joy of musical talent and the gospel.

Carl Patz is a first year teacher at MTHS. Before taking the job in the education of business, entrepreneurship, and financing, Patz had been building his portfolio in the same fields.

Coming from a long line of business owners and entrepreneurs, Patz feels very versed in his division of teaching. Patz has grown up under the influence of both his father and grandfather running the family owned grocery store, so it was almost expected that he would explore the field for himself.

“I am now co-owner of Hebron Lanes and Patz's Place. We are a bowling center with a restaurant and bar,” said Patz.

Patz has been the co-owner of both businesses since May of 2020 and, even though there have been ups and downs, has loved every moment. Students of his classes can recollect Patz speaking of some of his favorite moments in owning Hebron Lanes and Patz Place, including karaoke nights.

Patz has so far had an easy time transitioning into the teaching position. As a Hebron High School alumnus, Patz recalls the comforting atmosphere of small schools. Along with the help of co-workers and administrators, Patz has been able to think of the future for his students.

“I hope to see many students wanting to take different business classes so that if they choose to go into the business world after high school, they have some knowledge and feel confident,” said Patz.

Aidan Ilic is a senior at MTHS and has been a Cherokee from the time he was in kindergarten. Not only is Ilic a dedicated Cherokee, but is dedicated to being the light-hearted, goofy guy everyone calls their ally.

As mentioned, Ilic is a varsity soccer goalkeeper. A long time coming, Ilic has been training to be a goalkeeper for quite a while. It seems being goalie is a family trait. Ilic has been learning from his older brother, sister, both former goalkeepers at MTHS, and a cousin of his to be the best he possibly can be. Ilic has definitely put in his time to get to where he is, and it shows. Ilic uses this experience to not just be a better player but helps his teammates throughout the season.

“I encourage, challenge, and help them reach their full potential, from blocking their shots to calling out where they should be on the field," said Ilic.

Ilic’s skills have grown over the years and so has his outreach as an accomplished soccer player. Ilic has extended his wisdom and tutelage to younger players who can learn from Ilic’s insight. Not only does Ilic assist his own teammates, but he lends a helping hand to the other MTHS soccer team’s new goalkeeper as well. It seems Ilic has a knack for being instrumental wherever he goes.

Ilic is not only a varsity goalkeeper, but he is also instrumental in more ways than one. Ilic has played bass guitar for many years. In past years, Ilic was a crucial piece in the Morgan Jazz Band and Concert Band until this year, but he still uses his talents to immerse those around him in the delight of music.

Although Ilic is already racking up the resume decorations, he is anywhere but close to done after the fall season ends. Ilic is also a cross-country runner, track and field athlete, Future Farmers of America member, academic super bowl competitor, boy scout, and the vice president of the Fellowship of Christian Athletes. Clearly Ilic tries his hardest to be a jack of all trades.