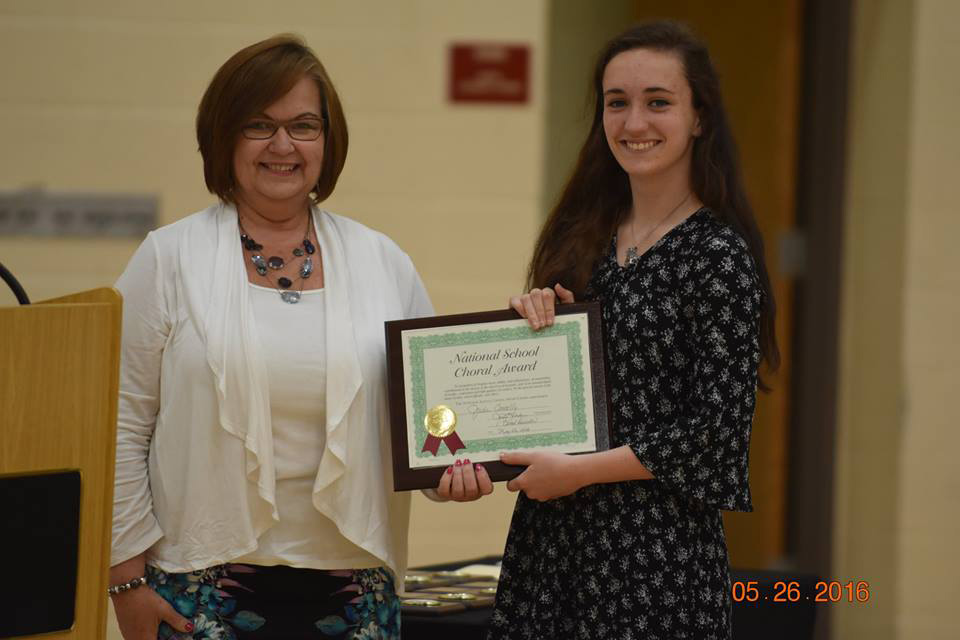 As a graduating senior, you have most likely had a specific teacher for, at the most, three years. It is rare to find a teacher that is there at your kindergarten and senior graduation.

Janet Wade, of Washington Township Elementary/High School, has been the choral teacher for the past 21 years.

“Having spent most of my teaching career in a situation where I taught many of the same children from Kindergarten through 12th grade, I have had the privilege of watching these students grow musically for many years,” said Wade.

She went through quite a journey to get back to Washington Township.

Making Her Way Back to Washington Township
In 1973, she began pursuing her music education degree at Fredonia State University in New York State. After three years, she decided to transfer to Valparaiso University, where she received a Bachelor of Music Education in 1979.

After graduating from VU, Wade sang professionally with the Norman Luboff Choir and toured the United States with them for about four months. When she returned from the tour, she taught three choirs and drama classes at a high school in Amherst, NY, due to an emergency vacancy leave.

Finding no full-time teaching positions in NY, she returned to Valparaiso and taught in Monon, IN, from 1981-82.

“That was a difficult teaching situation. I was an itinerant teacher at three elementary schools and one middle/high school. I decided to look for another position,” said Wade. In 1982, Wade began teaching at Washington Township School when it was a one-building K-12 school. She taught all elementary general music grades K-8, a middle school choir, a high school choir and a drama class.

In 1986, she received her Master of Arts in Music from Ball State University.

Another interesting opportunity came Mrs. Wade’s way to teach in Atlanta, Georgia. She accepted that position and taught in Atlanta from 1987-1996. During her time in Atlanta, she sang in the Atlanta Symphony Orchestra Chorus under the direction of Robert Shaw.

“While enjoying living in Atlanta, it was difficult for our daughter to really get to know her relatives that lived in Valparaiso and Buffalo, NY. I continued to look for opportunities to get back up North,” said Wade.

WTS Live and ISSMA
Along with teaching music class at the elementary level (besides kindergarten), she also directs a group called Washington Township School Live. WTS Live was actually started back in Atlanta by a teacher Wade worked with. It comprises of vocally talented fourth and fifth graders. Throughout the year, they perform at school concerts, the talent show, and other venues such as Winter Nights Light at Sunset Hill.

She also enters WTS into the Indiana State School Music Association (ISSMA) ensemble, where they perform a song in front of judges and receive a gold, silver, or bronze. In the last 12 years, WTS Live has received 11 golds and 1 silver.

Middle and HS Choir
This past weekend, 18 middle school students were chosen to attend Circle the State. Along with 10 other schools, approximately 140 all together, they sang songs in front of an audience at Goshen College.

“Circle the State with Song was a very wonderful and positive experience. Everyone is very nice and the conductor and accompanist make everything much more enjoyable, especially considering it is a really full and long day”, said 7th grader Cameron Andrews.

He also mentions, “I am very glad that Mrs. Wade is my music teacher. I love her teaching style. It is a mixture of old and new school-type music. Thank you for being a great teacher to all of us Mrs. Wade!”

“We’re not taught just how to sing and read sheet music, we’re taught how to live, love, and laugh. We’re taught how to respect each other and our teachers, we’ve been taught many life lessons. She’s not just a music teacher, she’s family to all us”, said Junior Carson Cunningham, speaking for the choir as a whole. Sophomore Olivia Barnes adds in, “Mrs. Wade is the most sweet and understanding teacher I have ever come into contact with. During musical season, she is super fun and it really draws you in, making us into one big family.”

Musical season starts February and ends in April. During those two months, Mrs. Wade and the students work together memorizing songs and scenes, making props, and just having a good time overall.

“I have been doing musical productions since 1982. Musicals are a wonderful way for students to come out of their “shell”, to showcase amazing talents and just have fun! Some of my favorites have been: ‘Bye, Bye Birdie’, ‘The Sound of Music’, ‘Guys & Dolls, Jr’, and ‘Aladdin, Jr’” said Wade.

The next musical is a Broadway Revue, featuring songs from “Grease”, “Hamilton”, “Wicked”, and many more Broadway musicals! Performances are April 7 and 8 at 7 P.M. and April 9 at 4 P.M.

Along with the musical, she is also in charge of the winter production for Drama Club. Combining the talents of both middle and high schoolers, Drama Club is another platform for students to capitalize on their talents. Wade resigned from the position about 5 years ago, but could not stay away, especially with many students asking her to come back.

Overall, Wade is a teacher filled with passion. Her career was chosen by her love for music and is evident in her teaching.

“Choir rehearsals are something I look forward to every day. Exposing children, pre-teens and teenagers to music that they might not ever have a chance to experience unless I give them that opportunity is empowering”, said Wade.

Simple things, such as her students singing songs down the hallway to their next class, makes the hard work worth it.

“Choir trips are a lot of work, but well-worth the time in preparing for an experience that students will remember for the rest of their lives”, said Wade. She mentions that the trip needs to be purposeful: quality performance opportunities, musically educational, historical emphasis, and a time to bond with the participants.

The past two high school choir trips achieved all of the goals mentioned.

Five years ago the choir went to NYC. While there, students performed at the Sony Building, in Times Square, and Central Park. They visited the 911 Memorial, saw the musical “Wicked” on Broadway, and shared many memories with each other. The summer of 2016, they went to Nashville, TN.

“Many of the students have a strong affection for Country Music...what better place to go to experience the history of that genre of music than Nashville”, said Wade.

Students performed in the Country Music Hall of Fame, had a studio recording session in the historic RCA studio, attended a show at the Grand Ole Opry, and had a bus tour of Nashville with their favorite bus driver “Randy”.

Life Out of School
Mrs. Wade has one daughter, Madison, who has just started college after a 7 year hiatus, with a 4.0 in her first semester. Madison gave her her granddaughter, who she loves and adores. She also has her sister and brother-in-law in Wanatha, along with her brother and mother in New York.

Even after all her work inside of Washington Township, Mrs. Wade somehow makes time to help out the community.

She is the Children’s and Adult Choir director at Trinity Lutheran Church in Valparaiso and is on the Board of Directors of the Concert Association of Valparaiso.

“I enjoy singing, when I’m not busy conducting choirs; reading, traveling, spending time with family and friends, and driving my Mustang”, said Wade.