The Winter months at Washington Township are easily some of the most anticipated of year - basketball season is in full swing, winter break is just close enough, and most of all, high school students have homecoming to look forward to.

Students at Washington Township High School celebrate Homecoming over the course of a week, which week is jam packed with different activities to get students involved and excited for the dance on Saturday Night. This week is entitled, Spirit Week - enjoyable for all students because even if students aren’t attending the dance the they can still participate in Spirit Week. 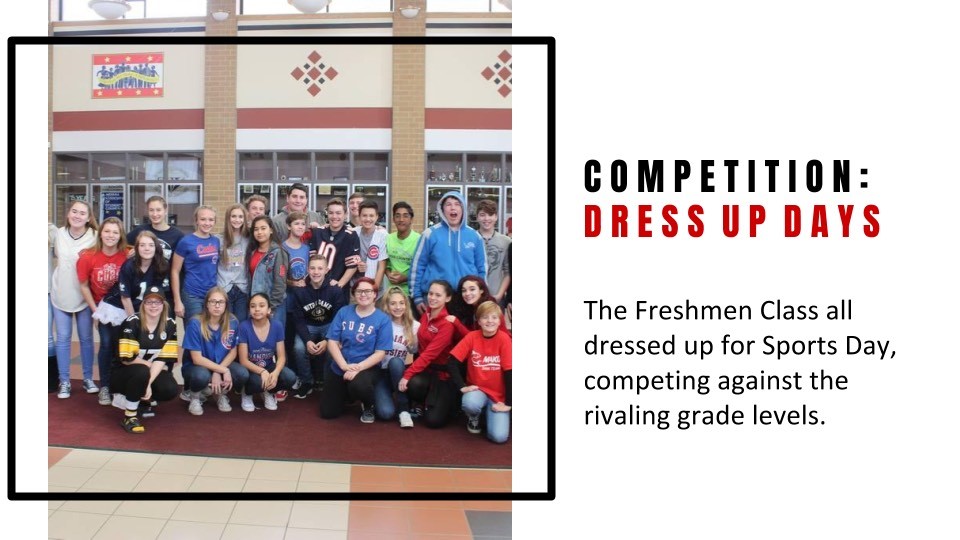 This year, Spirit Week started before students went on Thanksgiving Break and then continued once students returned. During this time students had themed dress up days, played icebreaker games, and cheered on the Varsity Girls and Boys Basketball teams at the game on Friday night.

Each year during Homecoming, the different grade levels compete against one another to see who has the most school spirit. The competition is composed of three categories of paritication: the dress up days, icebreaker games, and community service involvement. There were 7 dress up days: Pajama Day, Letter “C” Day, Camoflauge Day, Sports Day, Teacher Look Alike Day, Decade Day, and Extreme School Spirit. Each day the four grade levels would be asked to count how many students dressed up for each themed occasion - the grade with the most students dressed up would earn points for their class.

Along with that, the different grade levels competed in icebreaker games against one another. The games included dodgeball and tug of war; the winner of each would also earn points for their class.

The class with the most points at the end of the week would earn the Spirit Prize. Lastly, involvement in community service; this year the service project for Homecoming revolved around Toys for Tots, members of each grade level could donate in order to benefit the organization along with earning points for the class. 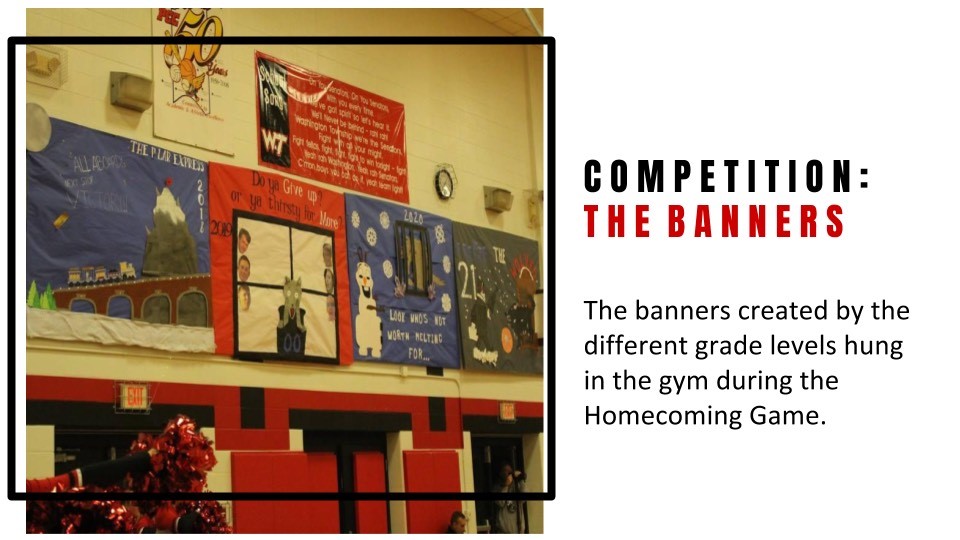 What’s Going On: The Court

What is Homecoming without a Court?! One of the best parts of Homecoming at Washington Township is the Court nominations and voting. This year Court would be made up of 6 Freshmen, 6 Sophomores, 6 Juniors, and 10 Seniors. 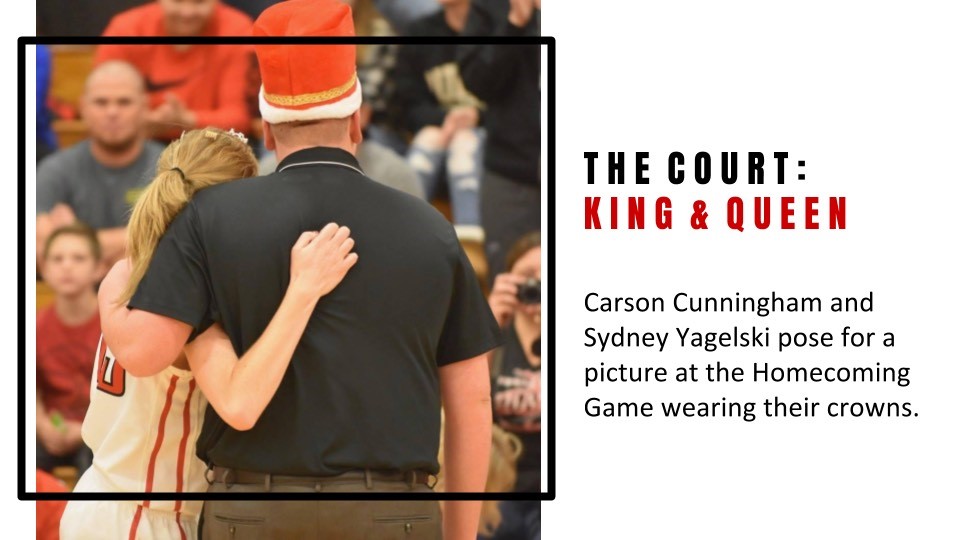 Emma Hawkins said, “To the be Homecoming Princess was really excited, it was cool to have been voted by my classmates.”

Sydney Yagelski said, “Being totally honest, I was shocked to be voted the Homecoming Queen. But I was also really excited."

What’s Going On: The Homecoming Game

Friday and Saturday Night are the highlight of Homecoming Week, this is the Homecoming Basketball Game and the Dance. This year both Boys and Girls Varsity took on the Boone Grove Wolves, both coming out victorious. Along with the hype of the game, students at Washington Township have become heavily involved in making the student section the best in the region and they are accomplishing the goal set forth for themselves. 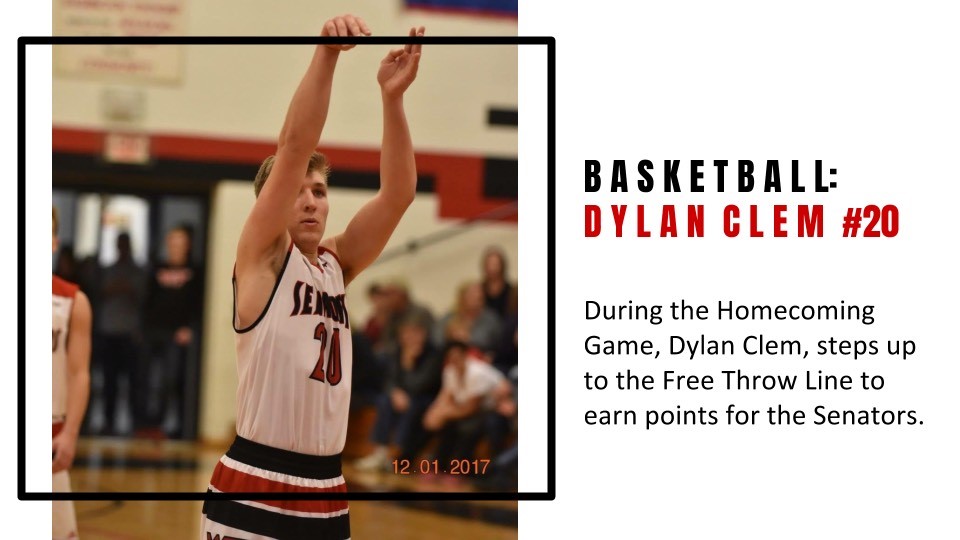 Senior, Carson Cunningham, is in charge of coordinating the student section theme for each home basketball game. He offers a prize to the top dressed student for each game to ensure students are going all out to cheer on the Senators to a win. The Homecoming Game was no exception to this. With the theme of red and black, Senator fans came decked out in anything and everything, their faces painted, and a “W” flag inspired by the Chicago Cubs so that when the Senators defeated the Wolves, they could “Fly the W”. Ending the Homecoming Game on a high note, students were more than excited for the dance taking place Saturday Night.

On Saturday morning, the Homecoming Committee got up early to decorate the atrium to look like a Winter Wonderland. With the decorations in place and the DJ set up, Homecoming attendees were anxious to begin their night. For some, this would be their first homecoming, while for others their second or third, and some their last.

Once the pictures had been taken and dinner had been served, attendees made their way to the dance where their expectations were exceeded. Trees covered with snow, white lights, and shades of blue filled the atrium while the biggest hits of the year were playing through the speakers. Quickly setting their things down, attendees rushed to the dance floor to dance with their date and friends. All in all, everyone had a memorable night and are already looking forward to next year’s formal. 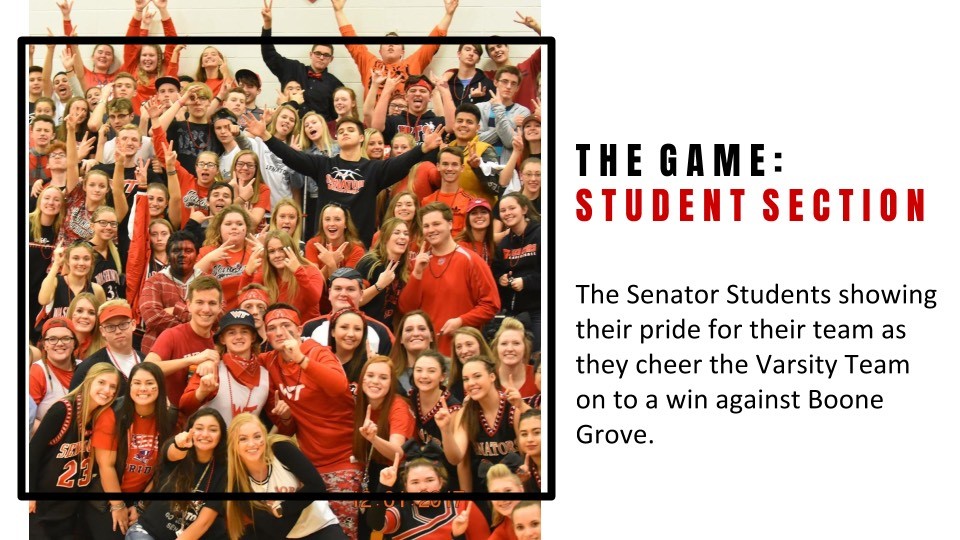 With such great success at the Homecoming Dance, there has to be a person responsible. This year’s Homecoming Chairperson was Student Council Vice President Jasmine Ellingen. With this position of leadership, Ellingen was responsible for coordinating and planning all things Homecoming. With such a large task at hand, she could not do it by herself and had the help of Homecoming Advisor, Mrs. Sandy Walla, and a Homecoming Committee composed of members throughout the different grade levels.

“I was really happy with how Homecoming turned out, it seemed like everyone had a good time. The Homecoming Committee’s goals and ideas were all achieved during Spirit Week and Homecoming," said Ellingen. “The greatest challenge during homecoming was choosing the theme while still including everyone's ideas. After a few committee meetings we all finally decided on a Winter Wonderland. Everyone was welcome to join the committee and share ideas they had which helped in making this important decision. After everyone shared their ideas, we voted. After choosing a theme we looked up ideas online and also used some of our own. Once we figured out the plan, we divided the task among everyone. Some decorations ordered or borrowed but most were handmade. The best for me throughout this process was when we had everything decorated and I got to see everything come together after working on it for such a long period of time. It was extremely rewarding."

Jasmine and the committee did an exceptional job with coordinating the Homecoming Festivities and attendees were not disappointed. 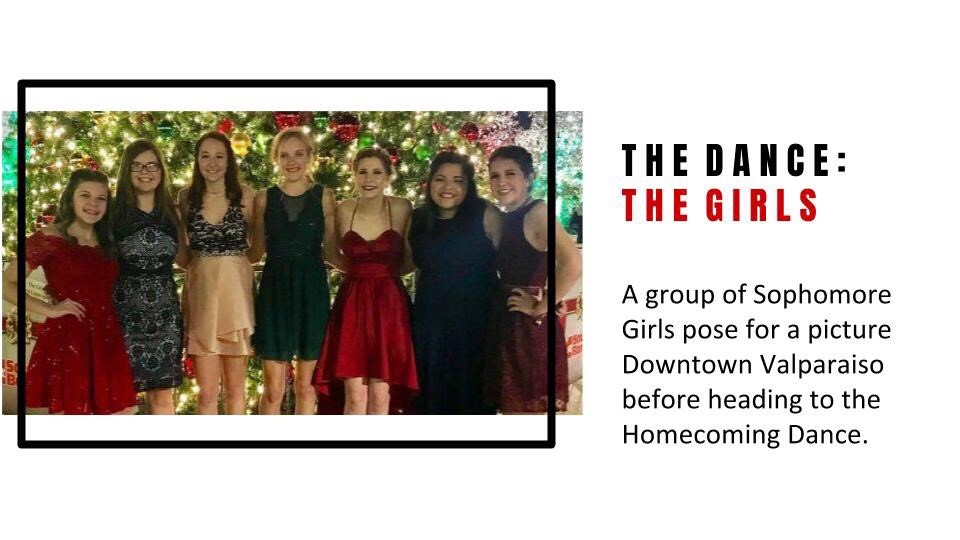 The Homecoming Advisor at Washington Township is Mrs. Sandy Walla. Mrs. Walla is responsible for helping the Homecoming Committee make sure all details are well thought out and executed.

Homecoming Chairperson, Jasmine Ellingen said, “It was so fun working alongside Mrs. Walla for this event. She has been the advisor for many years and her experience was extremely helpful. The both of us worked very hard with one another and in the end we accomplished something awesome. With this being my Senior year, it is definitely a positive experience I will take away and think about what I accomplished with the help of an amazing advisor.”

From all the Homecoming attendees, a special thank you is given to Mrs. Walla for making this memorable night possible, all of the hard work you put in does not go unnoticed or unappreciated. Thank you very much for all you do.

What’s Coming Up Next: Upperclassmen Look to Prom

With the first formal of the year in the books, attendees are anxious for the next. Underclassmen, freshmen and sophomores, will have to wait until next year, but for the upperclassmen, Juniors and Seniors, the next big thing around the corner for them is Prom. At Washington Township Prom takes place in April, although it is still 4 months away it’ll be here before the upperclassmen know it.