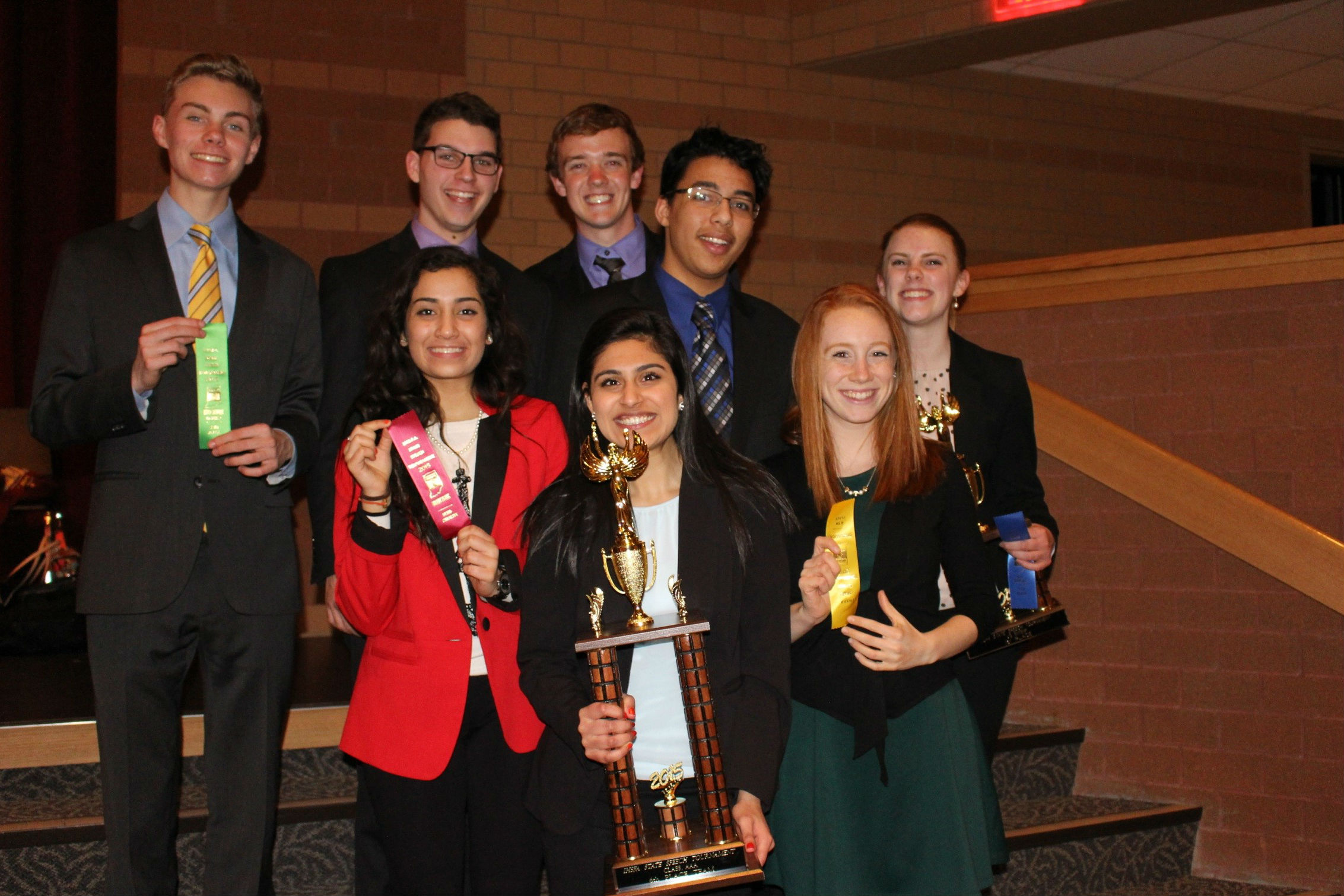 After about six months of intense preparation, Valpo’s Speech & Debate team was honored to send eight of its’ best to the state speech meet.

Aaron King says, “All year, the speech team has worked incredibly hard and this last weekend, we all performed to the best of our abilities, making it a remarkable competition. I’m super proud of us.”

Christian Sayers placed fifth in International Extemporaneous Speaking, and Francie Fink earned fourth in Discussion. VHS speech coaches were very happy that all their dedication finally paid off and every student who competed, accomplished their goal.

Congratulations to everyone who rocked the competition!! 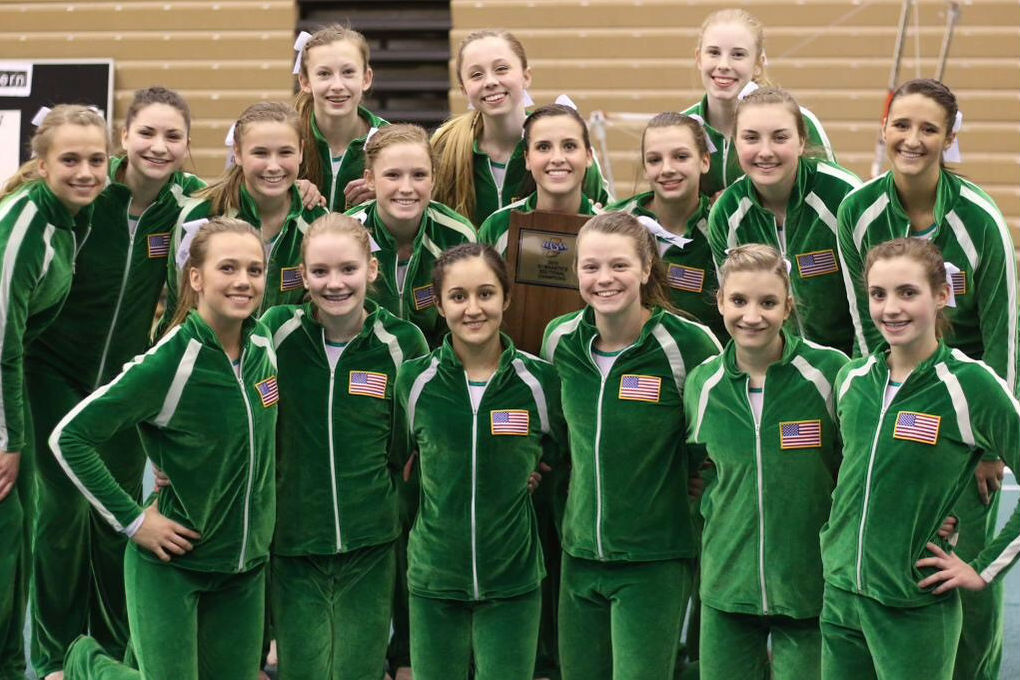 Valparaiso’s gymnastics team continues to bring pride to our school by winning state for the 11th consecutive year. In fact, Jenna Algozine, Sydney Intagliata, Rachel Moneta, Hannah Wilson, and Rushelle Miller were all named on the 2014-2015 All DAC Conference Gymnastics Team due to their incredible accomplishments.

Sophomore Sara Lynch comments, “This team is not just a team, but it is a family. The girls always have my back and they mean the absolute world to me. I am so proud of all the hard work we have all put in this year because it has definitely paid off.”

Well said Sara! After hearing many people comment on their immense success, I have learned that the VHS gymnasts serve as a sort of inspiration in Valparaiso because they are a prime example that with hard work, perspiration, and teamwork, anything is possible. So awesome job Lady Vikings! And we hope to see your success continue to shine in upcoming years.

In January, five students here at VHS came together with one passion: helping others. By forming the UNICEF club, they wanted to raise awareness at our high school for many problems around the world, but they never expected to have such a great impact. In March they held their first week-long fundraiser with the hopes of raising around $100-200. But they were in for a surprise.

Vice president Robert Kreloff said, “We began with a simple goal. If we raised around $150, we would be very happy. When, at the end of the week, we realized that we raised over $700 dollars, we were amazed at the generosity of some students at our high school. It was honestly touching to see that so many people wanted to help out with the cause.”

The club ended up raising $718 that was allocated to UNICEF’s immunization program. It just goes to show that when some people, like these 5, are exceptionally passionate about certain things, it pays off. As it did here, when a BRAND NEW CLUB gained so much popularity, respect, and success. 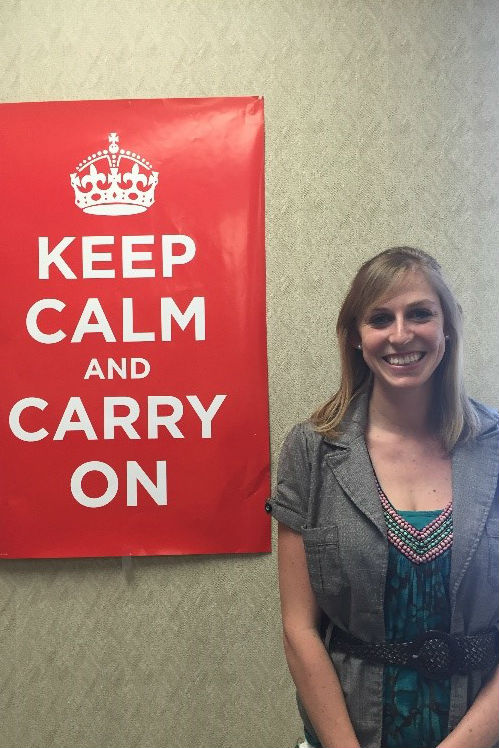 Not only does this history teacher TEACH like a rock star, but she is absolutely ALWAYS there for everyone, even if it is just to talk. For many students at VHS, Mrs. Walker is not only an amazing teacher, but she is also a friend who is capable of giving out the best advice as well as making your day 10x better. Here are a few compliments to her from her students:

Lucy Mellen: “Mrs. Walker has a genuine passion for her job that can be seen through, not only her teaching, but her personality. She cares about her students and will stop at nothing to make sure that they are all happy.”

Marybeth Scheibel: “I love that Mrs. Walker is very approachable and easy to talk to. I know that if I am having a bad day, she is the first teacher that will reach out to me to make sure I’m okay.”

Julia Rohde: “I love how invested she is in making sure that her students get the most out of their education. She’s so interested in getting to truly know, understand, and help everyone, and I find that to be one of her best qualities.”

Mrs. Walker, thanks for all that you do, and all of us here at VHS hope that you never stop being YOU!