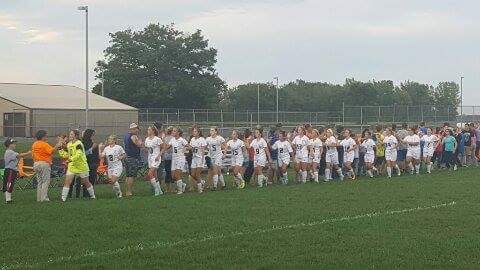 Medals & Sectional Matches:
The Fillies soccer team won their fourth straight match September 21st, 2 to zero, against Morgan Township in PCC play. Emmalee Deardurff scored the first goal on a penalty kick while Gabby Rogers pulled another. The Fillies were second place in PCC play with 4 and 1, 8 and 3 overall. They, then, defeated Hanover Central, 2 to 1, in the sectional semi-final. Gabby Rogers led the team with the first goal, followed by Emmalee Deardurff who added the other. McKenna Magura contributed 11 saves. In the championship game that evening, the Fillies, unfortunately, lost to Hebron. The Fillies officially ended their season with a record of 10-and-6. A special shout-out goes out to the girl seniors this year, Delilah Miranda, Emmalee Deardurff, Gracie Birmingham, and Gabby Rogers. Over their incredible 4 years, the had a record of 36-25-and-1, and 15-and-3 record in PCC play. In addition to two league championships and one sectional championship. Great job, girls! 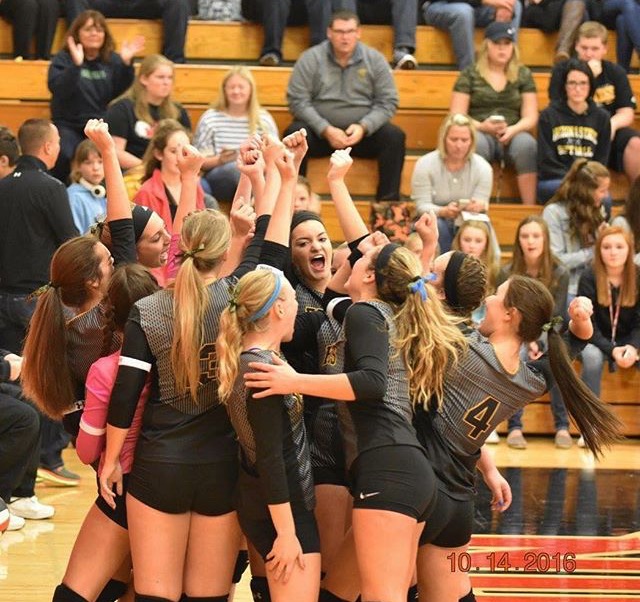 Winning Streaks:
The Varsity Girls volleyball team defeated Boone Grove on September 23rd. Playing with great defense and offense, Lauren Aguirre served 4 aces, Kyla Roney had 38 assists, Hannah Maier had 16 kills and 17 digs, Chloe Koedyker had 16 kills and 11 digs, Sadie Leatherman had 8 kills and 2 block kills, and Gracie Thompson contributed 8 digs. The Fillies continued on a winning streak on October 7th, defeating Victory Christian 18-16! Meagan Farmer and Chloe Koedyker led the team in front row play while Gracie Thompson dominated the back row. On October 10th, The Fillies advanced their winning streak to 9 in a defeat against Westville in the PCC tournament. Kyla Roney had 29 assists, Chloe Koedyker had 16 kills, Hannah Maier had 9 kills, Sadie Leatherman contributed 4 kills and 3 block kills, and Makayla Martin added 7 digs. Special shout-out is Hannah Maier who hit the most kills in a game! She tied the record of 23 kills on October 7th against Victory Christian! The Fillies then won another round of sectionals October 18th against 21st Century. Chloe Koedyker led with 11 kills and Hannah Maier contributed 10 kills while Kyla Roney had 24 assists and Lauren Aguirre had 4 aces. And they kept going with another win against South Central on October 11th in the PCC tournament. The Fillies defeated the Satellites in 3 games! Kyla Roney had 22 assists, Chloe Koedyker had 12 digs and 9 kills, and Hannah Maier had 14 digs and 7 kills. Great job, girls! 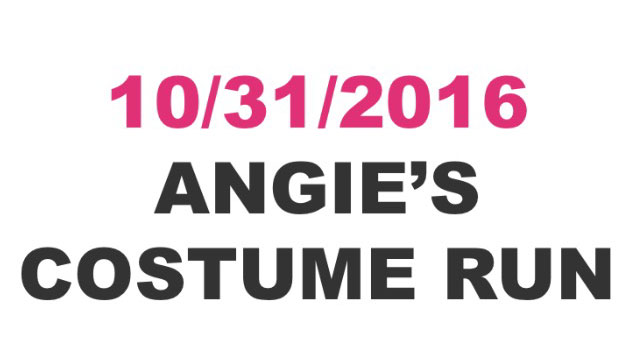 What’s Coming Up?:
There’s a lot of events coming up for October at Kouts High School. First on the agenda is Angie’s Costume Run, a run in honor of a recently passed Kouts citizen, Angie Konchar. Kouts Girls on the Run participants are hosting the run and walk in order to raise money to donate to the American Heart Association. This run will take place on the Kouts School track from 3-4 pm on October 31st. The fundraising goal is reaching for $3,000!

Finally, on our agenda list is the annual Ham & Turkey dinner on November 5th, 4-8! This year, we are having a special addition to the delicious foods, great entertainment, and over 1800 guests. We are having an autographed silent auction! Pastor Dr. Jesse Spencer and his family have organized and sponsored this silent auction through Ministries & SHINE FM. They are donating half of the proceeds to the Kouts Music Boosters while the other will fund the ministry and other non-profit organizations in Kouts. One item in particular is bound to be a big hit with people interested in the theatre, a signed playbill from the Broadway cast of Hamilton! There is also going to be Amy Grant signed items, Disney’s Pixar Art lithographs, autographed baseballs,footballs, movie posters, and more! 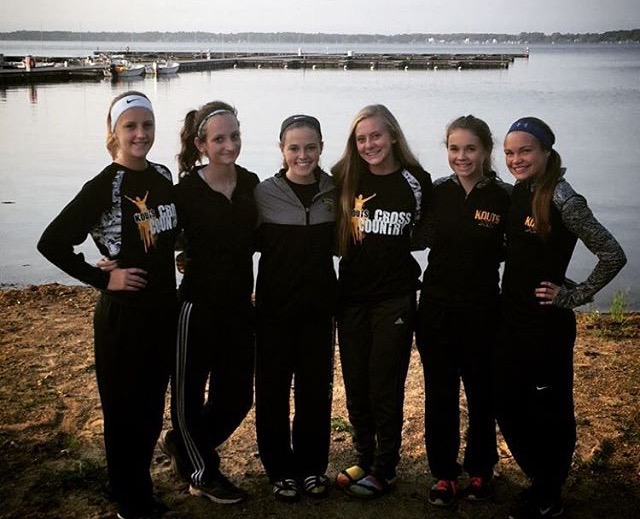 Student Shout-out:
The first shout-out is to a spectacular, junior athlete whose hard work and dedication shines brightly and is acknowledged by his coach. This student athlete is Tyler Heimberg. Whether blocking, attacking, or serving, Tyler dominates! He continues to grow as a great team member, individual, leader, and captain. His peers and coach can’t wait to see how he improves as the year continues!

The second shout-out is to another three-year member of the cross country team, junior, Ryleigh Cadwell (seen fourth from the left). After working hard and busting some butt, Ryleigh made all conference and is part of the runner-up cross country team for Round Robin and conference this year! Her coach and teammates often comment on her positive, bubbly attitude and glorious singing. We can’t wait to see what she can accomplish in the next year!

The fourth shoutout is to a year-round athlete named Ethan Ketchmark. Playing the full-court, front and back row, Ethan dominates the court with strong leadership and diligence! Renowned for having a positive attitude and can-do attitude, Ethan is making is making a great impact in his peers’ and coaches’ eyes!