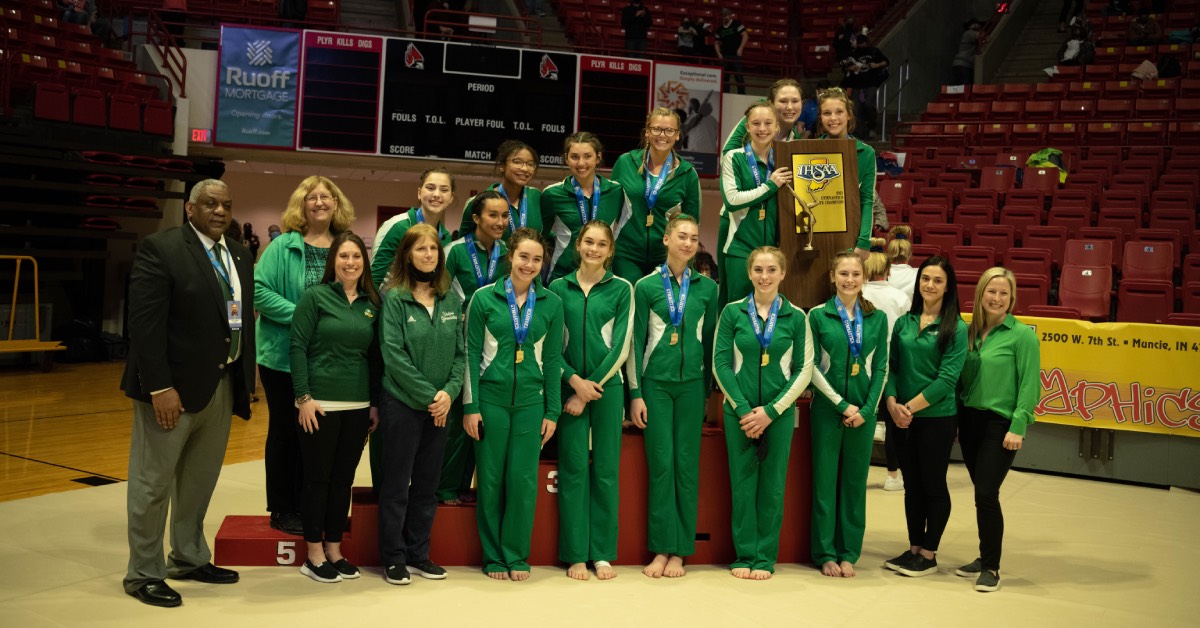 Caroline Fisher is a senior at Valparaiso High School. Fisher is involved in both the high school community, and the Valparaiso community as a whole. Fisher is involved in many clubs at the school. She has been a Vikette for all four years of her high school career, is a member of Indian Dance Club, Spanish Club, and Team LEAD. Along with those clubs, Fisher founded a yoga club at the school after receiving her yoga certification last year.

“The thing that led me to get my yoga certification was my genuine love for yoga,” Fisher said. “Once I started taking classes at a studio, everything changed. I met so many amazing people and had so many incredible experiences. Yoga has definitely changed my life and I wanted to share that with others so that they, too, might experience the bliss that yoga brings.”

Fisher stated that she has been practicing yoga for around five years now. She began practicing at the YMCA, but moved to a real studio and quickly fell in love with it.

“My favorite thing about yoga is definitely the community,” Fisher said. “I have built so many lifelong bonds through my studio, classes, and teacher training. Doing yoga alone has its benefits, but the most fulfilling thing is being in a room full of yogis all breathing together and sharing a sacred practice.”

While many people have struggled with hobbies or work during COVID-19, Fisher stated that she feels that she has been able to improve her practice due to COVID-19.

“I would say that my practice has grown deeper because of COVID-19,” Fisher said. “There was so much stress and uncertainty surrounding the pandemic, but I really felt grounded when I did yoga. Doing classes that my studio posted online helped me to get that familiar studio feel, listen to familiar voices, and complete a familiar flow.”

Fisher plans to attend either the University of Southern California or Pepperdine University in the fall. As of right now, she plans to study alternative medicine.

Mike Ippolito has been a teacher at Valparaiso High School for five years, and has been teaching for six years overall. Ippolito teaches Credit Recovery, English 9, and IB film at the high school. Ippolito majored in English and minored in film in college.

“I have a film minor from my time at Eastern Illinois University, and film is always something I have been interested in,” he said. “I really enjoy working on film projects for the different teams that I coach, and also helping students see their own film visions come to fruition.”

Along with using his passion for film to teach his students, Ippolito is also a sponsor of the Film Club. Ippolito is very involved in the athletic community at the school. He is the head coach of the freshman football team, and an assistant coach for the wrestling team.

“My favorite part about coaching football is the community aspect,” Ippolito said. “Our football program has a very strong family feel, and seeing everyone in the community come together on Friday nights is what it is all about! Nothing compares to a Friday night under the lights!”

Ippolito’s favorite part about coaching wrestling is the state series tournament. From Sectionals all the way to the State Finals, he says that seeing athletes that you coach advance and move on to achieve their goals is a great feeling.

“I am biased, but I feel the Indiana State Wrestling Tournament is one of the best run high school tournaments in the country!”

The Valparaiso High School gymnastics team won the state competition this year with an overall score of 111.3. Led by Head Coach Lorie Cook, the team also claimed the highest score of the season.

“We were ecstatic to win State,” Cook said. “Although we didn’t go undefeated, we were the most consistent team in the State throughout the year.  We also posted the highest team score of the season, and, despite our youth and relative inexperience, our team supported each other, and remained mentally tough throughout the tournament series.”

Senior Sabrina Falk discussed her favorite part about the team’s success at this year's state meet.

“It felt amazing when all of mine and my team’s hard work finally paid off,” Falk said. “My favorite part of competing at state was being able to compete with my whole team there, along with our families. Last year no spectators were allowed and our whole team wasn’t even allowed in the arena, so having everyone there supporting us was my favorite part.”

The team gained their great success this season through a lot of hard work. Cook expressed that the team was constantly working hard to learn and improve new skills.

“In addition to building team camaraderie, our team increased the difficulty of their routines tremendously this year,” Cook said. “Skills needed to be learned, perfected, and then performed consistently in practice and meets in order for us to be successful. Our entire team was up to that difficult challenge, with new skills successfully being performed for the first time even in the last week of the season.”