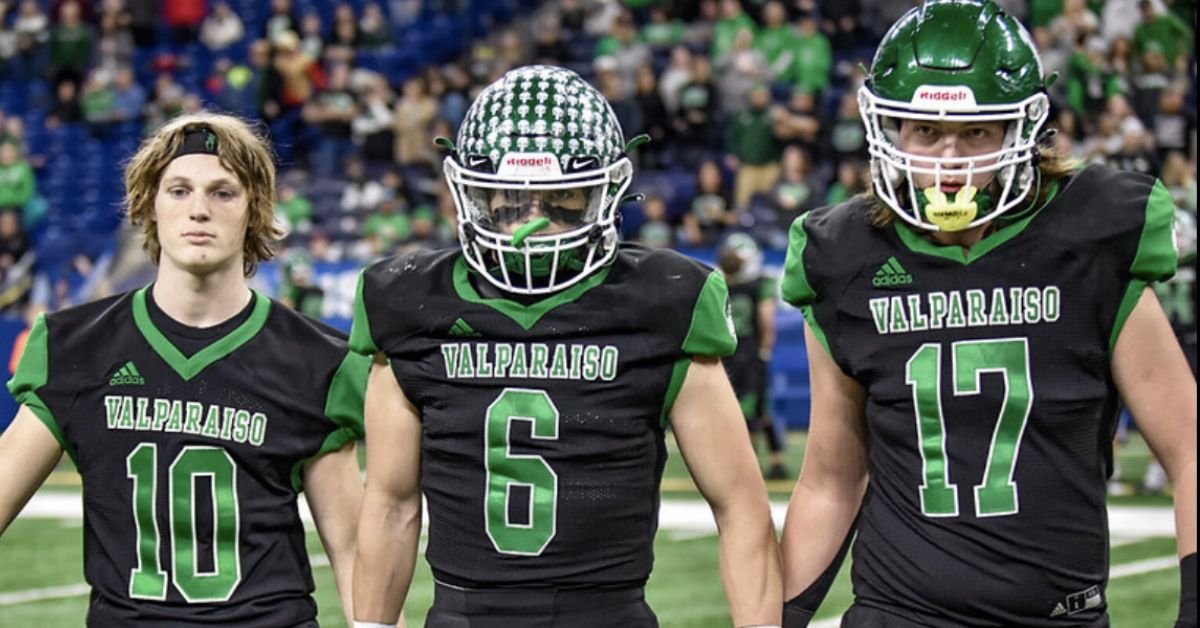 “Winning state was truly just a cherry on top for bonds that have been built since I started playing in seventh grade. We talked about doing this when we were 13, and the fact we actually did it makes it feel like a storybook ending,” said Senior Charlie Hammon.

Losing against Penn High School in the first game of the season showed the Vikings that they would need to work harder and come up with new strategies if they wanted to win this year.

“Being embarrassed by Penn in the first game of the year brought great motivation on what we needed to do to get better and be successful down the road,” said Senior Jon Williams.

Losing was not a feeling the Vikings wanted to get used to.

For the past couple months, the team spent day and night together forming unbreakable relationships on and off the field.

“The biggest takeaway is easily the relationships made. I played all four years of high school and a lot of the people I played with during that time truly became like family to me,” said Hammon.

The Vikings appreciate the incredible support and can’t wait to defend their championship title during the 2023 season.

The swimming and dive team at VHS started their season off strong with a win against La Porte High School.

The final score for the girls was Valpo 129 and La Porte 54.

“I think this season’s going to be a lot of fun. We’ve been working really hard, and I think we are going to make it far. Go Valpo!” said Girls Team Captain Izze Piggott.

With a great start to the year, Piggott would advise not missing a meet to help keep up the excitement and to support the swim and dive teams.

Head football coach and VHS health teacher, Bill Marshall, has been part of Valparaiso Community Schools for the past 17 years. Marshall attended Valparaiso University where he earned a Bachelor’s of Science in Education and then received his Master's Degree in Education from Ball State University.

The VHS atmosphere is what has kept Marshall at the school for so long. Teachers at Valpo really care about the well-being of their students and work hard to inspire teenagers in various ways.

“Valpo is a unique place to teach because of the emphasis we put on the whole student. We as teachers don’t just teach our subject content, but also how to become great young men and women in our society," he said.

Alongside teaching three health classes, Marshall has been assisting the football team since he started at VHS. For the past five years, Marshall has worked with the team as head coach. He has watched the team not only succeed but also grow as a family.

“The game of football is a microcosm of real life. We as a team and a family go through the ups and downs together," he said. "We emphasize the importance of the family and the brotherhood that is forged through working collectively together for a common goal.”

With the support of the school, friends, and family, Marshall was able to lead the Vikings to win a state championship during this year’s season.

“The community support for our program has been remarkable! Whether it is “We Are Valpo” signs posted in downtown shops or the green lights on houses for our postseason schedule, Valparaiso is our greatest support system other than our parents and alumni of the program. We are beyond thankful for their continued support of our program," he said.

With a great end to the season, Marshall encourages his football boys to continue to do their best off the field.

“I would recommend that high schoolers focus on the process," he said. "Students should focus their attention on the small, everyday things like being on time and submitting work by their deadline. These tiny things that sometimes go unnoticed are what build great habits that carry us into adulthood. Students need to understand that no matter if they like the work, or the class, or the content, they are refining life skills that they will utilize for a lifetime.”

The VHS staff would not be the same without Marshall.

Senior Makayla Albertson is ready for the next chapter in her life. Albertson can make anyone smile on their worst day and is always a light in the classroom. Planning to attend Ball State University, Albertson wants to double major in psychology and criminal justice.

“I am looking forward to independence and freedom as a college student," she said.

Albertson is a member of the VHS Speech, Debate, and Mock Trial team. She has been with the team since her freshman year and really appreciates the experience of being on such a close team.

Alberston also takes private music lessons music in her free time as well. She plays Oboe for the VHS band.

“VHS gave me many more opportunities than I would have gotten elsewhere," Albertson said. "I am really going to miss seeing people that I've gotten really close to every day.”

Albertson advises other students to not take things too seriously. High school is a small part of life.