The start of the school year is an exciting, but ultimately uneventful time for high schoolers. Once the glamour of the first day has worn off, the first few weeks of the new year are fairly barren, awaiting clubs and activities to kick into gear.

With that said, the Valpo Vikings aren’t exactly complacent in allowing everything to be bland. That’s where the Varsity Football team made their mark in the VHS hallways, bringing fun and unified excitement. The Vikings started their season off with a bang, beating Penn for the first time in seven years, and continuing their streak with another win against Mishawaka.

The Valpo Vikings are determined to make this their year. The senior class is especially abuzz with the palpable excitement of leaving a mark on their school with a fantastic season.

“I never thought I’d be anticipating each and every game, week after week,” Senior Soren DeKock said. “It’s just infectious. You can’t escape the excitement."

The environment surrounding the VHS football team is one that the Vikings haven’t come close to seeing over the course of the past three seasons. By the looks of it, there is nothing able to stop the Vikings. 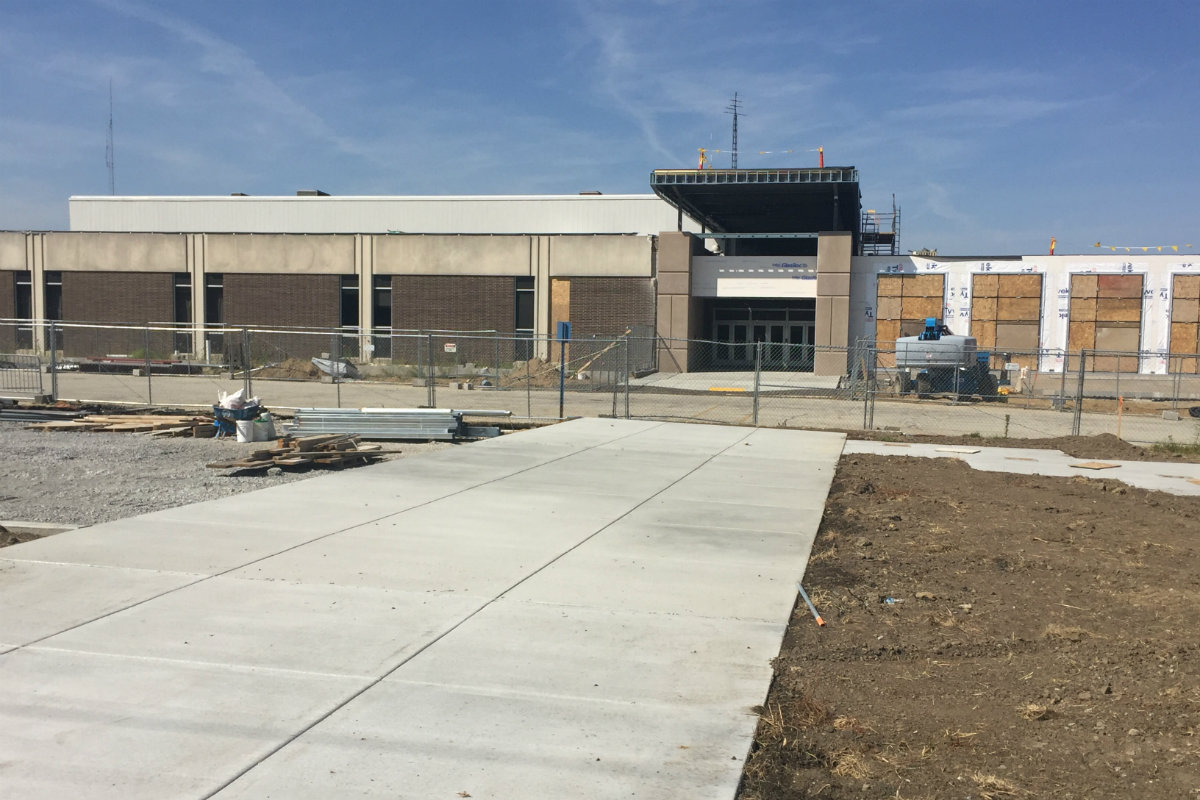 With the new school year comes a heap of changes. For VHS, the most obvious changes are happening to the building itself, with the construction that is still occurring all over the building. However, there are other changes happening on a less invasive front: new school organizations and clubs.

Every year, students take it upon themselves to start clubs centered around something they love, and this year is no different. One new club is Film Club, a chance for enthusiasts of everything movie-related to geek out and watch some films together. Last year was the very first year VHS had a dedicated IB Film course, and now comes the club to go alongside it.

Another new club that has a lot of excitement surrounding it is the Robotics Club. Started by a few passionate students, Robotics club is looking to teach real world applications of the technology, such as search and rescue initiatives, and allow students to design, build, and test their very own device, as well as put it through various challenges. The club is being run by the students, Mr. El-Naggar serves as teacher sponsor, and they are provided with support from Project Lead The Way, an initiative emphasizing STEM learning in high schools across the country. All of that sounds intense, but the leaders ensure that no prior knowledge of robotics or advanced mathematics is needed.

For all VHS students, every new school year is filled with chances to get involved in something. Whether that be community oriented or purely interest based, there is no shortage of things to do at Valpo High. 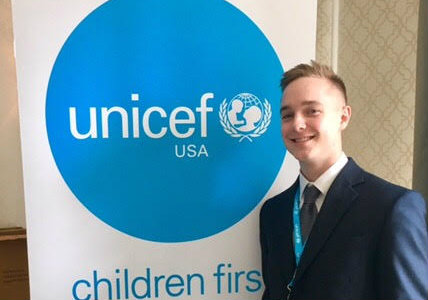 Valpo High School is filled with bright, young minds dedicated to making a difference. Sometimes this manifests itself in the form of community service, and sometimes in involvement in a church. For other students, being involved in clubs at their high school is just enough to make a difference in their community.

Senior Christopher Bower is one of those examples.

“I’ve been involved with many organizations over the past four years, but currently I serve as president of our VHS student council, Vice President of the VHS UNICEF chapter, and a member of our National Honors Society. I also have fun leading Viking Nation (student section) on Friday night football games. Freshmen and sophomore year I played on the soccer team and junior year I switched over to kick for the football team On top of this, I enjoy participating in intramural basketball during the winter and work throughout the week at Shoe's Pizzeria.” said Bower.

With a hefty repertoire like that, Bower is one of the best that Valpo has to offer. His tenacity and wide reaching involvement make him one of the best examples of what Valpo High helps create- well rounded and dedicated students who are genuinely interesting in giving back to the community.

“When I leave Valpo High School, I hope to leave a legacy of a passionate student who truly cared about his local high school. I hope to set a positive example for the students in younger grades, exemplifying how to become involved and dedicated to an organization, sport, etc. within their community.” 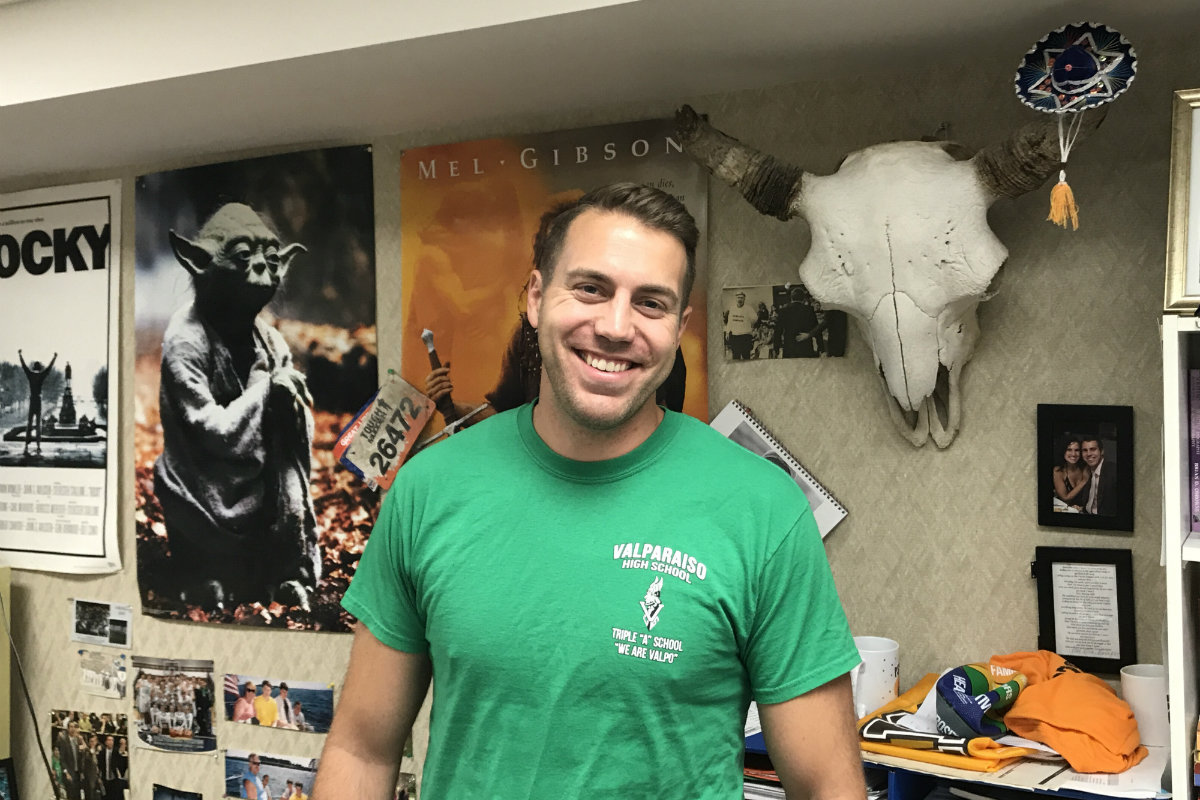 All high schools are filled with passionate teachers. Teachers who wake up and cannot wait to start a day of changing lives. As many who attend Valparaiso High School find out, Ben Lieske is one of those teachers. He's a teacher who is doing what he was born to do, and obviously loves it!

“Initially, I chose the profession because I had so many wonderful teachers who had such an amazing influence over my development that I would say I was inspired by them. Now my relationships with my students and colleagues truly continue that drive.”

Mr. Lieske is also known for getting incredibly excited about being able to say the word “syllabi” (plural of syllabus) on the first day of school when he hands incoming students the class syllabus. But, that isn’t the only thing that excites him about a new school year.

“The best part of the new school year is that newness. The page is fresh and anything can be written. That freedom of possibility leads to an eager anticipation that I think all students and educators feel. Sure there is some anxiety in there too…”

As any of his former students can tell you, Mr. Lieske breaks through that starting anxiety very quickly. There are not many teachers who have the energy, understanding, and humor that he possesses. Every single day is a new lesson, whether it pertains to Psychology or not. The man is full of stories and wisdom, and that makes sitting through lectures a pleasure, which is something that cannot be said for everyone. Mr. Lieske is a teacher that once you’ve had one class with him, you want every class to be taught by him.