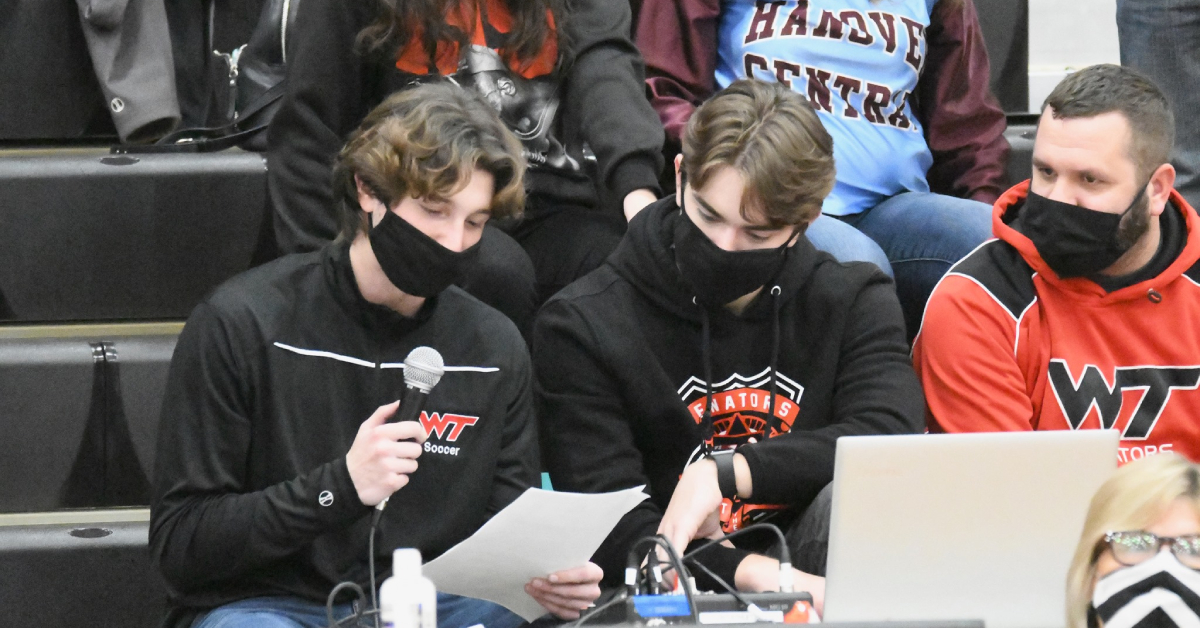 The Washington Township High School’s Boys Varsity Basketball Team, headed by coach Scott Bowersock, had a strong start to their season. In their first game, which was against Hanover Central, which was Saturday, December 5, the Senators won 67 to 53. Leading scorers included senior Tyler Hachey with 29 points and senior James Hernandez with 24. Steven Hernandez and Nicholas Sears both secured 3 rebounds, making for an incredible game.

Under normal circumstances, the Senator Gym would have housed a spirited student section dressed to the nines in Saturday’s theme. Juniors and seniors, who had been waiting to sit in the front rows for years, would have flooded in early to get good seats and catch up with each other. A boisterous pep band would have announced the team’s entrance, filled the air with rock classics during time outs, and thoroughly celebrated the victory. The Washington Township concession stand would have been bustling, and the audience would have enjoyed bags of its famous popcorn. Last Saturday, however, the boys played for a quiet crowd of about 50 parents.

There were no cheerleaders, and there was no rowdy pep block. Instead, the boys ran out to a smatter of clapping. As of now, only players’ immediate family is permitted to attend the games, and everyone must distance and wear masks at all times. This made for a quiet audience; one could hear every shoe squeak, every play being called, and every time-out discussion.

Bonner Scott, a long-time supporter, said the atmosphere was unsettling and outright depressing, but thankfully for Scott and the Senator fanbase, Washington Township staff and students have big plans for this season, both for upcoming games and once restrictions loosen up.

“I wanted to be able to watch the games and be involved in the action,” Schmidgall said.

Realizing that it would be difficult for people to see everything clearly on the live streamed games, Schmidgall devised a way for fans at home to see and hear the details of the game. With the help of his best friend, Bretin Boettcher, Schmidgall successfully announced his first-ever basketball game.

Schmidgall’s tell-tale announcer voice rang through the gym, informing fans of sub-ins, points scored and fouls for both teams. Behind the scenes, Boettcher researched statistics and kept track of player names. Boettcher said that their partnership is key.

“Charlie brings the personality to the operation, and I make sure that everything is in order. Neither of us could do this alone,” he said.

Boettcher’s efforts have earned him the honorary title of “Master of Quality Control.”

The pair is constantly looking for ways to make games more memorable. Schmidgall brainstorms player nicknames that are sure to bring smiles to all, including Rece ‘Rooster’ Goetz and Tyler ‘Mooseman’ Hachey. The pair also shares stats from recent college basketball games to keep fans up-to-date on their college sports. At a recent girls’ game, Schmidgall gave a gripping weather report and encouraged fans to visit Applebee’s for dinner that night. He keeps the audience on their toes.

Washington Township band director, Justin Thompson, has also been pondering ways to make games more entertaining. Because the current situation does not allow for pep band performances, Thompson looked for a creative way to get band students to the forefront. The solution? Drumline. Traditionally, trained percussionists join in the Washington Township Drumline, which performs for the audience during varsity halftimes. Thompson made the executive decision to open drumline to the rest of the band this year. To some this was a risky choice, but Thompson knows that without risk there is no reward.

“I felt it was a way to perform during the pandemic. It’s something we can do despite the restrictions,” Thompson said.

Despite the fact that the 2020-21 drumline is composed of drums, flutes, trombones, clarinets, saxophones, and a french horn, Thompson is unfazed.

“Teaching non-percussionists has not been much different. They’ve been picking it up pretty quick,” he said.

Thompson eagerly awaits the day when the larger-than-ever drumline makes its debut. He hopes to perform live starting in mid-January.

Senior Caden Walsworth, called “Drum Master” by some and “Drum King Caden” by others, is the longest-standing drumline member. He has been a percussionist since the age of six and has played snare at the front of the formation for the last four years. Needless to say, Walsworth has the experience to learn his own parts and support newer members. He often picks up the snare part easily and then assists the quad players as they work through difficult rhythms. Basketball games are Walsworth’s favorite part of drumline, and he cannot wait to take the floor and lead the drumline in cadences titled “Furious,” “Tadpole,” or his personal favorite, “Thunder Sheep.”

The Lady Senator Dance team is also gearing up for a strong season. Although they cannot perform at games yet, they have begun rehearsing their first performance song. In a normal year, the ladies recruit in late spring and learn all of their songs at a camp in July. The COVID-19 virus pushed everything back this year, and the team just started meeting this month. Despite that setback, ten girls tried out for this year’s dance squad. They are working together to make up lost time and create a contest-winning dance.

Senior captain Viviana Franco is expecting greatness this season. Franco, who has been dancing since she was three years old, said that dancing is an art and passion of hers. She likes to express herself in that form. In her early years, Franco studied ballet, tap, and hip-hop dancing, as well as Mexican folkloric dance.

“I wasn’t a senior, but I managed to bring the team together and make everyone feel included and valued,” she said.

To Franco, the best part of the dance team is the bond between the girls. She and her co-captain Melissa Krawczyk work to create an encouraging environment in which each girl feels valued.

Franco looks forward to the dance team’s debut, which will likely be in mid-January. She hopes that her senior season will not be ruined by the pandemic.

“I really enjoy performing and the adrenaline that I get when performing in front of a big audience,” Franco said.