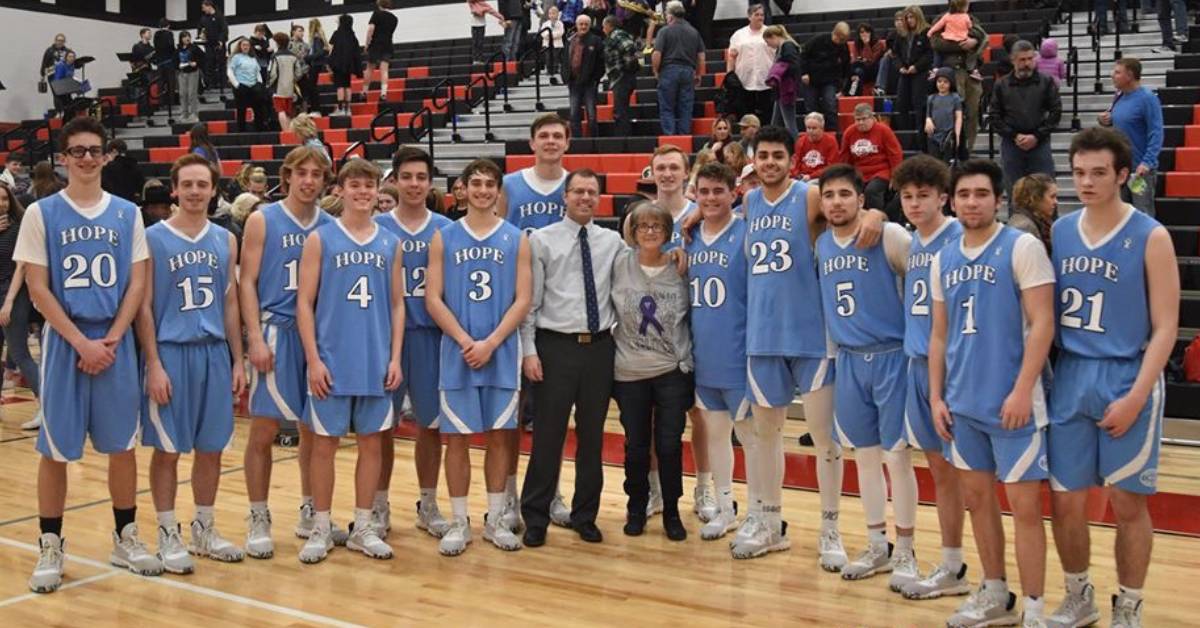 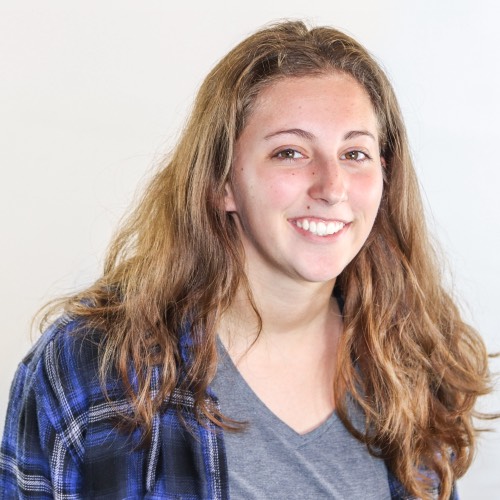 Mrs. Linda Armstrong is a beloved part of the Washington Township High School (WTHS) community. A parent and grandparent to people highly involved in school activities, she is dedicated to all of the students and faculty. Armstrong has been the secretary at the elementary school for years now, yet still recognizes students that are now in high school by name, and stops to talk to them. Her hard work keeps the elementary organized and running smoothly.

When the news broke that she was diagnosed with colon cancer, the heart and soul of every Washington Township Senator ached. The beauty of a small community like this is that everyone was connected to her in some way, and wanted to show their support.

On February 21, love was not represented by pinks and reds, but by a sea of blue in the Senator gym. The boys varsity basketball team took on the Whiting Oilers in special blue uniforms; and, in light of the theme for the game, the Oilers wore customized shooting shirts to promote the cause.

When Armstrong spoke in between the games, thanking everybody for attending and for the countless cards she had received, many tears were shed. Overwhelmed by the continuous flow of care from the community, she accredited everything, including her own strength, to God. Her heartfelt speech only reinforced how much she has impacted the Washington Township community.

Now, everyone is wishing for her treatment to go well and her family to remain strong.

Junior Charlie Schmidgall is sort of a mascot for WTHS. Throughout his high school career, he has participated in every type of activity from sports to service.

Scmidgall still plays soccer and is the star goalie for the varsity boys team. Now, however, most of his time is spent on business and real-world activities.

Schmidgall is a part of the Mock Trial team as well as DECA. DECA is a business role-play organization where students compete in a variety of entrepreneurship challenges; Schmidgall said it is best described as, “a business academic team.”

Washington Township’s DECA team is exemplary in both the partner and single events. At their first qualifying competition on January 11, Washington Township swept the floor, bringing home an abundance of blue ribbons. Even more, most of the team qualified for state.

Schmidgall’s favorite part of the events are the role-playing events, during which students are given facts about a company and a problem to solve.

“I like the challenge of getting a realistic business-related problem and presenting it in front of the judges,” said Schmidgall.

Schmidgall first joined DECA in eighth grade, and the last four years has given him practice in the simulated business world.

Last year, he qualified for internationals down in Orlando, Florida and spent a week in the sunshine state. This upcoming week is the state competition, which determines if he will advance to the international competition, held in Nashville, Tennessee.

In addition to his personal competition, he also is running for DECA President. He currently holds the spot as president of Washington Township’s DECA chapter but hopes to gain a whole new experience.

DECA has enhanced Schmidgall’s people skills. Schmidgall has always been very personable, but DECA has honed these natural abilities.

“DECA has shaped my ability to speak and given me an idea of what I want to do in the future. And my best friends are in DECA, so it makes me giddy,” he added.

Washington Township wishes Schmidgall and the rest of the team good luck in Indianapolis next week.

Within the last few years, Washington Township began a Mock Trial Team. It is a club where students learn about court cases and are tasked with re-enacting them. Local lawyer Chris Schmidgall founded the team and has been passing his extensive knowledge of the law onto the students.

One student in particular, JJ Stewart, has taken a particular interest. Stewart has been a member of the mock trial team for three years. In the role-playing competitions, Stewart was a lawyer the last two years, and captain of the prosecution team this year. As captain of the prosecution team, Stewart talks about preliminary matters for the team.

“We had a lot of fun,” said Stewart. “It was a good learning experience. Having my best friends on the team made even the practices very enjoyable.” The tight-knit group developed a close friendship, and their weekly practices and inside jokes strengthened their connection. Although they did not compete as well as they initially hoped, the friendships and lessons they learned made their participation even more worthwhile.

Chris added, “I am extremely proud of the kids. They worked very hard to prepare themselves for the trial, and I’m glad I got to help them through it.”

Students at Washington Township High School are introduced to the prospect of band and choir at a very young age. In elementary school, students can participate in WTS Live, an advanced performance group, and have the option to join band once they reach sixth grade.

The ISSMA provides an opportunity for students to challenge themselves in either a solo or ensemble performance. If students receive a gold rating in group one, the highest difficulty level, then they advance to state. The choir quartet consisting of seniors Emily Reeder and Will Phillis and juniors Kaylee Reeder and Ben Liles were one such group.

“It was really cool to see all the other groups at the contest, we were able to see how we earned our spot,” Reeder said.

Reeder also made it to state for her solo. This was the first time she had performed a solo ensemble. This year, she was pleased with her ratings for both. Her quartet obtained a silver and she won another gold for her solo.

“Although I felt confident in my solo, the quartet was less stressful because I had other people with me,” Reeder said. “It is impossible to compare the two, though.”

Choir ISSMA was held on February 22, and the band students will perform on February 29. Seniors Jenn Cahillane and Katie Evans played their flute and baritone, respectively, and have been preparing for state for the past month. Both of these exceptional band members have participated in ISSMA since sixth grade and welcome the complex music.

“I like the challenge,” Cahillane said. “The performance is all on you; it’s up to you to push yourself, learn your music. It’s a good test as to how far I’ve come the last six years.”

Cahillane and Evans are some of the most dedicated band members and have always excelled in their contest music. With their final ISSMA performance approaching, Evans remarked that she was sad to finish.

“I’m sad that it’s my last solo,” she said. “I love band with all my heart and the college opportunities are just different since I am not majoring in music.”