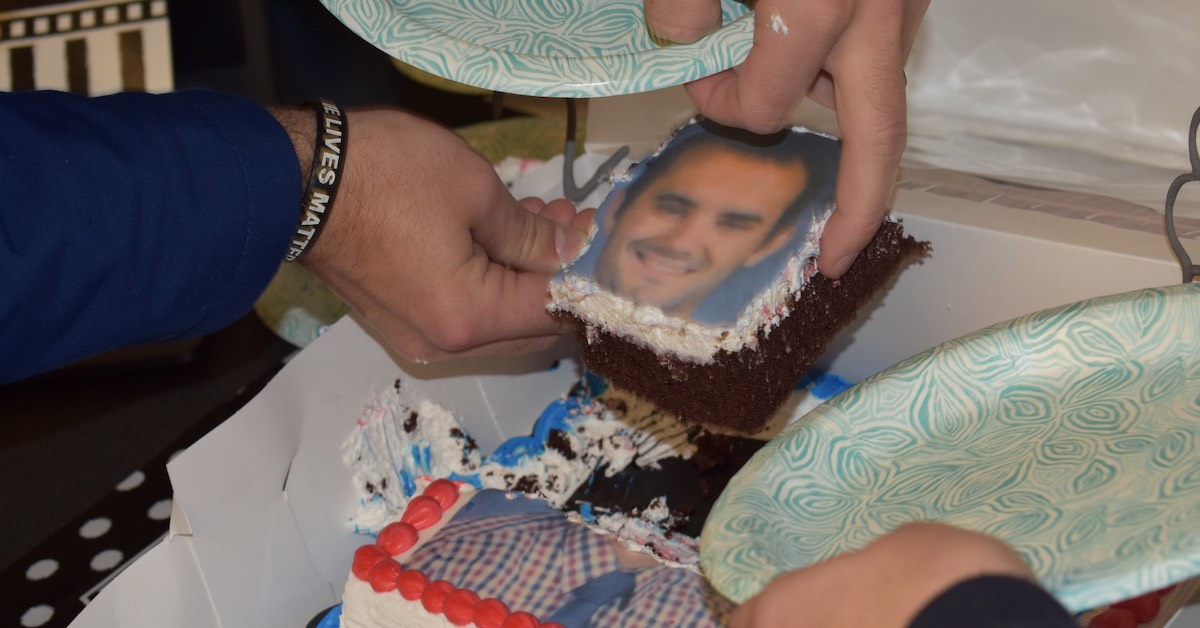 Typically, students dislike math. Whether it be because the numbers just don’t add up, or because equations swirl around their brains, math is one of the core classes that poses a struggle to most students. With math being a crucial component to test scores and college readiness, schools need to ensure that teachers are preparing their students in the best possible way. It really does start with the teachers.

Daniel Leighty is one of the teachers in Washington Township’s math department. After graduating from Valparaiso University, he taught at Lake Station before coming to Washington for a total of six years.

The highest class that Mr. Leighty instructs is AP Statistics. Composed of only ten seniors, Mr. Leighty deals with a small group of students that lose more and more motivation as the year goes by. However, his superb teaching and relational skills keep the students engaged, even on their most rambunctious days.

As simple as it is, the best word to describe his classroom environment is “fun.” Especially in his stats class, Mr. Leighy excels at incorporating a variety of interesting activities into his curriculum.

Sarah Walker, a senior, has had Mr. Leighty multiple times throughout high school and is taking AP Statistics with him this year. She loves Mr. Leighty because, “He genuinely cares about his job, and you can tell.”

With Mr. Leighty’s birthday in November, his AP Stats class wanted to surprise him. After a turn of events, however, the party got pushed back to Wednesday the 18th, the last class of the semester. During lunch, the students blew up balloons and hung up decorations in his room. To bewilder Mr. Leighty even more, the class chipped in to purchase a cake decorated with Cubs-colored frosting and a very pixelated picture of himself.

Mr. Leighty spoke from his heart to his class saying, “I really and truly appreciate it. You make teaching this class fun. I’m looking forward to second semester, it’s got a lot of great things.”

What has happened: Band and Choir Winter Concert

For this year’s annual band and choir winter concert, the students had the amazing opportunity to perform at Valparaiso University’s chapel. After months of preparation, both the middle and high school’s bands and choirs played on Monday, December 9th. Compared to the usual gym set-up, this gorgeous venue was a nice change.

Junior clarinet player Lizzy Roger said, “I liked the chapel because it felt like a better scene.”

A few of the students had never been inside the chapel, so the elaborate wooden architecture pleasantly surprised them. For many, this ambiance helped put them in the performing mindset.

The winter concert was the sixth grade band’s first performance of the year. Knowing it was going to be at the chapel excited Ainsely Goetz, who plays the tenor saxophone, and Abby Hart.

Gotez commented, “Playing in the chapel was very fun, but it was also echoey.”

One of the most challenging aspects for any performing group is adapting to different environments. The band director, Mr. Justin Thompson, did an excellent job in reminding his students to watch him count rather than getting lost in the potential echo.

Each and every single one of the groups had a phenomenal performance, and this one was definitely one to remember.

Most musical students that play at Washington have zero previous experience when they test out different instruments to sign up for band in sixth grade. However, most is not all.

Now a junior, Caden Walsworth has been playing the drums since he was six years old, about ten years. He joined percussion in the school band since it just made sense for him.

“I like it because it’s unique in the band and there’s a lot of different options,” said Walsworth. “There’s just a lot of opportunities to play.”

Unlike larger schools that may have a seperate concert band and marching band, Washington’s band students get to participate in each type of performance. Walsworth’s favorite is definitely pep band. With basketball being a huge part of Washington Township’s culture, it only makes sense that the band kids enjoy playing during the games just as much as other students enjoy cheering.

Walsworth likes it because, as he says, “I get to be more creative. Since there’s a solo drummer, I get to try different things.”

During pep band, the percussionists will rotate different people on the drum set. Walsworth is a perfect candidate for this as his favorite music to play is ‘70s and ‘80s rock.

Another unique part of Washington’s pep band is the drum line. Founded about four years ago, Walsworth and senior Steve Finely are currently the leaders of the drum line now. Using marching band drums, four percussionists will play cadences during half-time for the student section. The students, who are all decked out for that game’s theme, love dancing to the beats.

For the most recent game on December 20th, the band invited graduated members back for an alumni night. Kyle Krawczyk, from the class of 2019, joined his friends back in the drum line to perform a few songs with Walsworth, Finely, and another senior, Michal Boyd.

People enjoy winter break in a variety of ways in the midwest. Whether they stay at home with their families or travel south to the warmth, the Washington Township community savors their two weeks off ofschool. The abnormally warm temperatures here this year have been quite the change for a lot of people. When the temperatures reached the low 60’s on Thursday, students did not hesitate to take a beach day in Northwest Indiana! Yet, while some people are drawn to the sand, others in NWI crave the snow.

The Mecchia family loves to ski, for instance. Junior Alexa Mecchia and her younger brother Matthew, a sophomore, travelled with their parents to Boyne Mountain in Northern Michigan. They have visited there every year since they were little kids.

Alexa loves going back because, as she says, “I get to see everything again. It never gets old and there is always something to do.”

The Mecchia’s four-day trip is filled with plenty of time on the slopes. One thing that makes Alexa stand out amongst the other skiers is her love for crazy costumes. While skiing, Mecchia looks forward to showing off her red chile pepper and elephant costumes. She said that other people wear fun clothes, too, and she loves seeing what wacky hats some of the others have to wear.

Boyne Mountain may not be any tropical beach, but for people like the Mecchia’s, it is just as nice of a get-away.