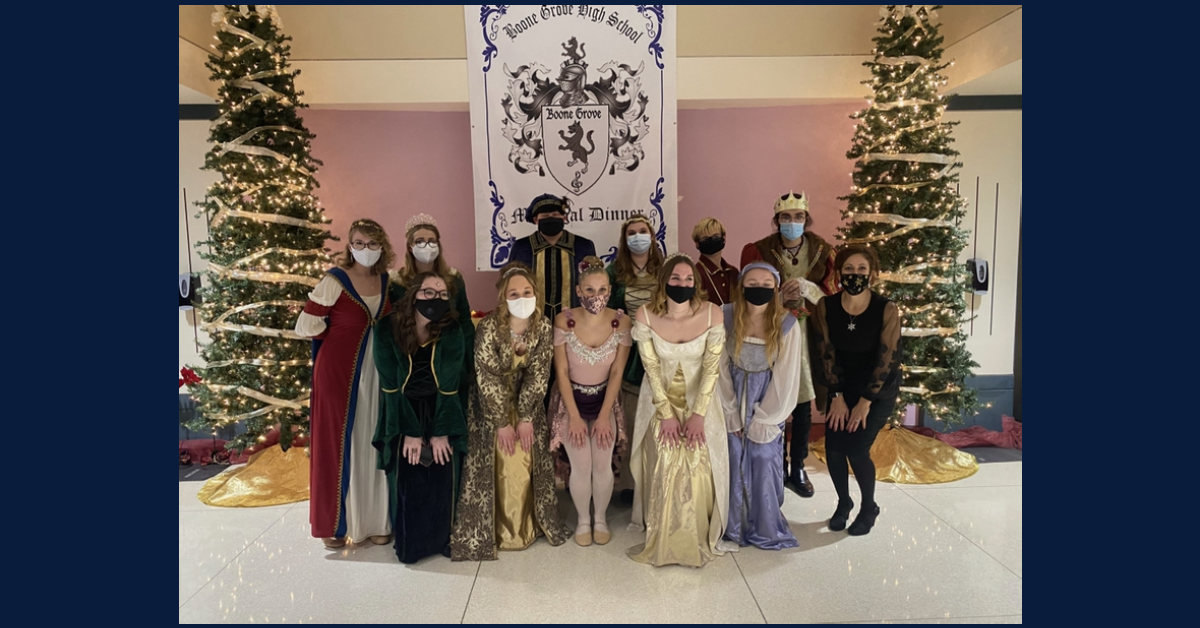 For several weeks, the Boone Grove High School band prepared for their annual holiday concert. The band held their previous concert outside due to COVID-19 restrictions, but this concert was allowed to proceed indoors, and took place in the gym on December 8. The audience was required to socially distance - sitting six feet apart with only two to three seats per group of family members.

Before and after the production, students in the band wiped down and sanitized all the seats in the gym. Another step taken to adhere to the safety precautions, was positioning the band on stage so they were socially distanced. This was especially important because students had to remove their masks in order to play their instruments.

Despite COVID-19 restrictions, the band presented its audience with an evening of musical enjoyment. Even the virtual students were involved. Students had their own “virtual concert” if they opted not to come into the school to join the in-person concert. They recorded their pieces and submitted them to the band director ahead of time.

All of the band members worked incredibly hard in order to hold this concert before winter break and before finals week. The 37 students involved with the concert did an amazing job.

“It's very fun to be in the band, experiencing things with your friends and being able to just play," Freshman Austin Guerrero (who plays the alto saxophone) said. "You become part of a family and gain memories that you will keep a hold of for the rest of your life!”

Additionally, Boone Grove’s choir presented their incredible Madrigal concert on December 16. Madrigal is well known as one of the biggest events held at Boone Grove High School. The Boone Grove choir dressed in Renaissance era clothing and the seniors were assigned to make family crests to display during the concert.

This year, the choir had three queens (Emma Grant, Sara Fuller, and Abigale Donovan) and one king (Jordan Saunders).

Traditionally, the Madrigal concert is held in the cafeteria where food is served, and guests are catered to. In order to ensure the safety of the guests and students, the concert was moved to the gym. There was no food present this year, but the students made sure the experience was just as fun as years past.

Preparing for this event took many hours. Choir students spent their class periods decorating for the event and some students even stayed after school making sure the set, decorations, and costumes were ready. Crests had to be hung, purple linings covered the walls to the gym, the stage was decorated, the sound system had to be prepared, and much more.

Announcers sat at the doors, inviting each guest in and called their names proudly with a resounding “Huzzah!”

There were a variety of songs performed in a multitude of different languages, including English, French, German, and Ukrainian. Students spent many weeks learning these songs in order to provide an authentic feel for the audience. The Jester, danced in the background, along with the subtle jokes thrown in to provide some humor for the audience. Overall, the choir provided an incredible experience.

Some seniors joked about how different it would be for the freshman students who had only ever known the COVID-19 era Madrigal, and not the extravagant event that they usually put on. At the end of the concert, many seniors found themselves emotional having to confront the fact that this was their last time partaking in the Madrigal concert. Students made sure to grab photos with choir director Athena Welbourne before leaving for the night.

This year has not been easy for students across the country, but the Boone Grove students always try make the best of a situation. Although they’ve faced many challenging situations, from quarantine and technology issues to illness, they managed to pull through and put on a fantastic show.