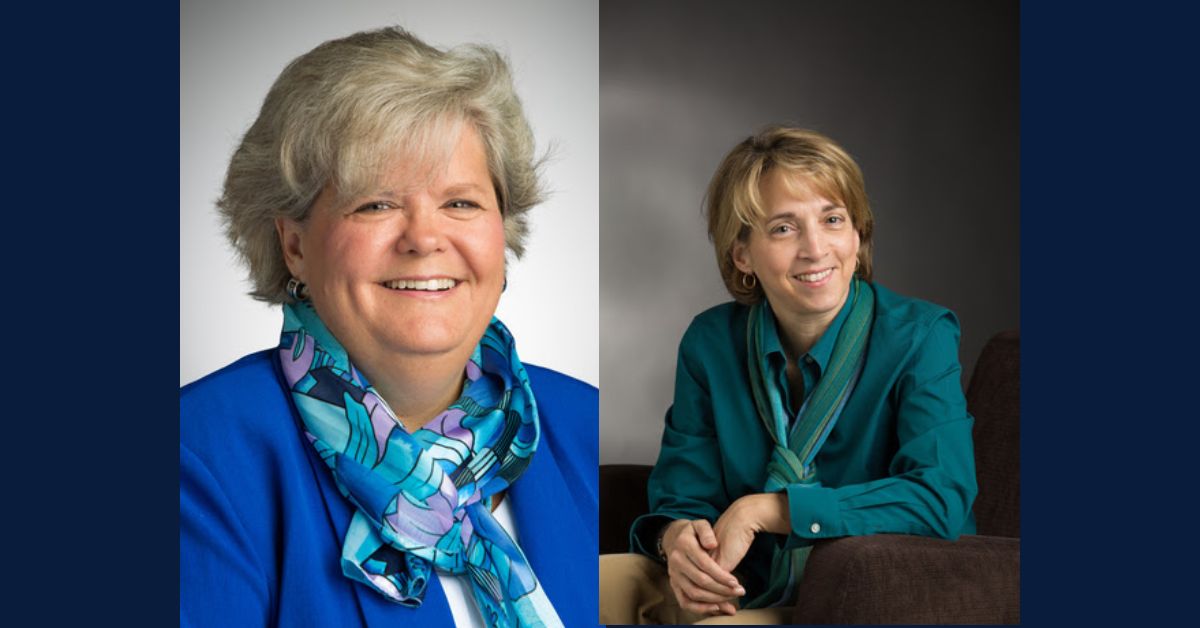 Gretchen Buggeln, Ph.D., professor of humanities and art history, and Nola Schmidt ’83, Ph.D., RN, CNE, professor of nursing, have been selected as co-recipients of the 2022 Valparaiso University Award for Excellence in Research and Creative Work by the Creative Work and Research Committee (CWRC).

Buggeln has been a member of Christ College — The Honors College since 2004 and the Phyllis and Richard Duesenberg Professor of Christianity and the Arts since 2009. Buggeln’s work has focused on the intersection of Christian belief and the material world. She has authored two university press monographs, two edited academic books, eight chapters in academic edited volumes, and numerous refereed journal articles, encyclopedia entries, general essays, and exhibition and book reviews.

“Professor Buggeln's work speaks to both scholarly and public audiences and has shaped the fields of American religious architecture, religion in museum studies and the developing field of vernacular architecture,” Jennifer Prough ’91, Ph.D., interim dean of Christ College, said.

Schmidt received her B.S. in nursing from Valpo in 1983 and returned to teach for the College of Nursing and Health Professions in 1992. Her co-authored textbook: “Evidence-Based Practice for Nurses: Appraisal and Application of Research” is currently in its fifth edition. Schmidt’s work on guided imagery as a mechanism of self-care for children in pain has been shared around the world.

“Professor Schmidt’s ability to translate research into practice and share this with students in the classroom is amazing,” Kristen Mauk, Ph.D., former Valpo faculty member and current senior editor for the Journal of Christian Nursing, said.

The Award for Excellence in Research and Creative Work recognizes a tenured faculty member who has made significant scholarly contributions to their discipline and/or to the public discourse over the course of their career. The awardee is engaged in the national or international conversation within their domain of study, demonstrating notable accomplishments and recognition in scholarly, artistic, or other relevant communities. The award comes with a $3,000 prize.

Buggeln and Schmidt were honored for their achievements at the Scholarship and Creative Works Reception on April 7.