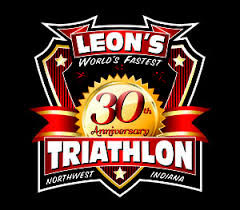 Northwest Indiana hosted the 30th anniversary of the “world’s fastest triathlon” on Sunday, June 2. Leon’s Triathlon, a nationally broadcasted event, allowed participants to bike, swim and run their way through Northwest Indiana while millions of households across the nation watch the event on Comcast SportsNet.

This year’s race brought over 900 triathletes from around the nation to the region to compete in the race. During Demo Day on Saturday, June 1, allowed attendees the opportunity to try gear from triathlon product manufacturers. The interactive race expo showcased various products including wet suits, bikes and shoes used by professional triathletes.

“We are so very humbled with the success of this event and the participation we have received from teams and athletes,” said Leon Wolek, founder of Leon’s Triathlon.

Leon’s Triathlon is an Olympic distance race beginning and ending at Wolf Lake, including a .9 mile swim, 24.6 mile biking portion and a 6.2 mile running portion. The Amateur Female winners of the race were: Jennifer Garrison of Naperville, IL; Kristine June of Highwoood, IL; and Megan James of Portage MI. The top placing Amateur Males were Jason West of Breiningsville, PA; Mark Harms from Madison, WI; and Adam Zucco from Elburn, IL.

For the full list of winners and times of Leon’s Triathlon of participants visit http://results.active.com/events/leon-s-worlds-fastest-triathlon--2/individuals-and-relays