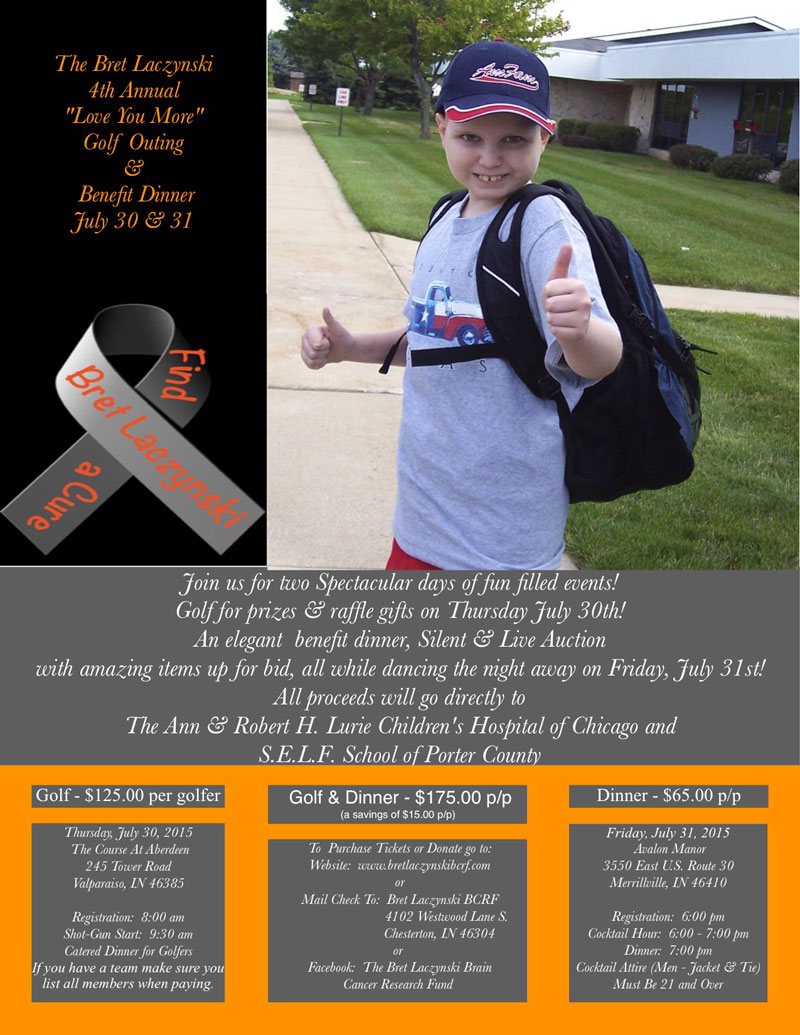 Bret’s Story
Bret was like any other normal healthy 10 year old boy just starting the 4th grade. He was always a straight “A” student, favorite sports to play were soccer and golf and he was a diehard Cubs fan! Although Bret was a very shy boy by nature, once he felt comfortable with you, he loved to make you laugh with his one-of-kind sense of humor. You would have never thought that this handsome little blonde-haired, green-eyed boy was about to face the biggest fight that no child should ever have to.

Bret completed a total of 13 days into the school year when he started to experience unexplainable symptoms such as, vomiting for no apparent reason, extreme tiredness, neck pain, an unsteady gait and finally double-vision. About 4 weeks passed of pediatricians not having any answers, so we took him to the emergency room near our home in Indiana. On September 28, 2002, a CT Scan revealed a golf ball size mass in the fourth ventricle of his brain. An emergency surgery was performed that night to relieve the pressure (hydrocephalus) building up around his brain. We were told that due to the severity of his condition, Bret would need to be cared for by pediatric specialists.

There was no time to even absorb what was actually happening to our son, a decision had to be made and fast. The Ann & Robert H. Lurie Children’s Hospital of Chicago (or formerly Children’s Memorial Hospital as we knew it then) is known all over the country as one of the top children’s hospitals in the world, and it is where we wanted him to be. Bret was airlifted the next day by Children’s Transport Team. We were greeted by the top physicians in their fields, Dr. Stewart Goldman (Hematology/Oncology) and Dr. Tadanori Tomita (Neurosurgery). An MRI determined our worst nightmare, Stage 4 Medulloblastoma brain cancer. Surgery was performed 3 days later to resect the tumor. As if things couldn’t have gotten any worse, the tumor had metastasized to the entire surface of his brain. We were given the very aggressive course of treatment plan, but were also told that Bret was not expected to survive. How, as parents, do you even begin to explain this to your very sick little boy, when we don’t understand it ourselves? So Dr. Goldman stepped up and very graciously explained to Bret, in only words a child could understand. His response was simply, “ok”. And so it began.

Bret was to begin a six week regimen of brain and spinal radiation, followed by fourteen months of chemotherapy. All of that was halted when Bret starting seizing uncontrollably. In order to stop the seizures, he had to be put in a drug induced sleep with monitored anti-convulsant medications. It was then that he had a very dangerous allergic reaction to one of the medications and developed yet another life-threatening condition called Stevens Johnsons. He was in the PICU for about 3 weeks until the rash cleared up and he was finally able to begin his treatments. Because he was still considered unstable, they transported him everyday, for the entire six weeks, by ambulance to Northwestern Memorial Hospital. Once chemotherapy began, it was about 4 months before Bret was finally able to go home.

He wasn’t home for more than a few days at a time, because the chemotherapy side effects were bringing him right back to the hospital. Many surgeries, line infections and low counts kept us coming for about the first 2 years of his illness. He was only able to complete about 7 months of chemotherapy as we almost lost him twice due to the aggressiveness of the treatments. With Dr. Goldman’s advice, we had to stop treatments and hope for the best. Bret defied all odds and as time went on, he was well enough to attend a school for children with disabilities. The Special Education Learning Facility (S.E.L.F.) of Valparaiso, IN welcomed Bret with open arms. Because Bret experienced so much trauma to his brain, he was developmentally delayed, suffered apraxia (oral motor difficulties limiting feeding), aphasia (limited communication), seizure disorder, adrenal insufficiency and hypothyroidism, just to name a few. You would expect someone faced with so many challenges to be angry with everything around him, but not Bret. He walked in that school with so much confidence, joy and happiness, that he greeted the entire class with a big “hi, Me Bret”, and hugged everyone in the room. It was from that moment on when they all realized what a special young man he was. There wasn’t a mean bone in his body. He just exuded love and compassion to everyone he met.

Bret continued to thrive for the next 5 years or so. Throughout that time, we had occasional hospital stays for one thing or another, as well as routine scans and blood tests, but against all odds, he remained in a stable condition. Our happier days quickly came to a halt in late November of 2011. We started to notice subtle changes with his vision, like not being able to focus, depth perception and an increase in seizures. As these signs worsened, we discovered a lump on the back of his head and immediately called his doctors. His routine scan was moved up and completed in January of 2012. Our worst fear had come true, another brain tumor. A biopsy a few days later revealed that this was a post-radiation tumor called a Chondroblastic Osteosarcoma, one that we knew he had a 20% risk of developing from his treatments the first time around.

We again were faced with all of our options for Bret and were advised by his doctors that given how he was unable to tolerate the treatments the first go –around, they did not want to put him through that trauma again. So we were forced to make the decision that no parent should ever have to make. We wanted to give our son the best quality of life he had remaining and to make sure he was as comfortable as possible. The doctors had expected it to be 2 to 3 months left, but once again, Bret did things his own way and fought until the very end. On May 25, 2012, our courageous young boy lost his fight and passed away so very peacefully.

Bret was truly a “Miracle Boy” in everyway imaginable. The doctors never thought that he would have survived another 9 ½ years, so this is how he was commonly referred to every time we were there. Throughout his entire journey, he never once let you know that he was in pain, or that he was angry or sad about having cancer. He always made sure to tell us “Love You More” many times throughout the day. He has touched so many lives and continues to inspire people everywhere with his strength, courage, love and compassion, that it is why we were driven to start The Bret Laczynski Brain Cancer Research Fund in his honor. It is what Bret would have wanted to help in whatever way he could, so no child should ever have to suffer like he did. It is with great pride that I can call him my son and will continue to keep his memory alive. “Thumbs Up” Bret and “We Love You, We Love You More”!