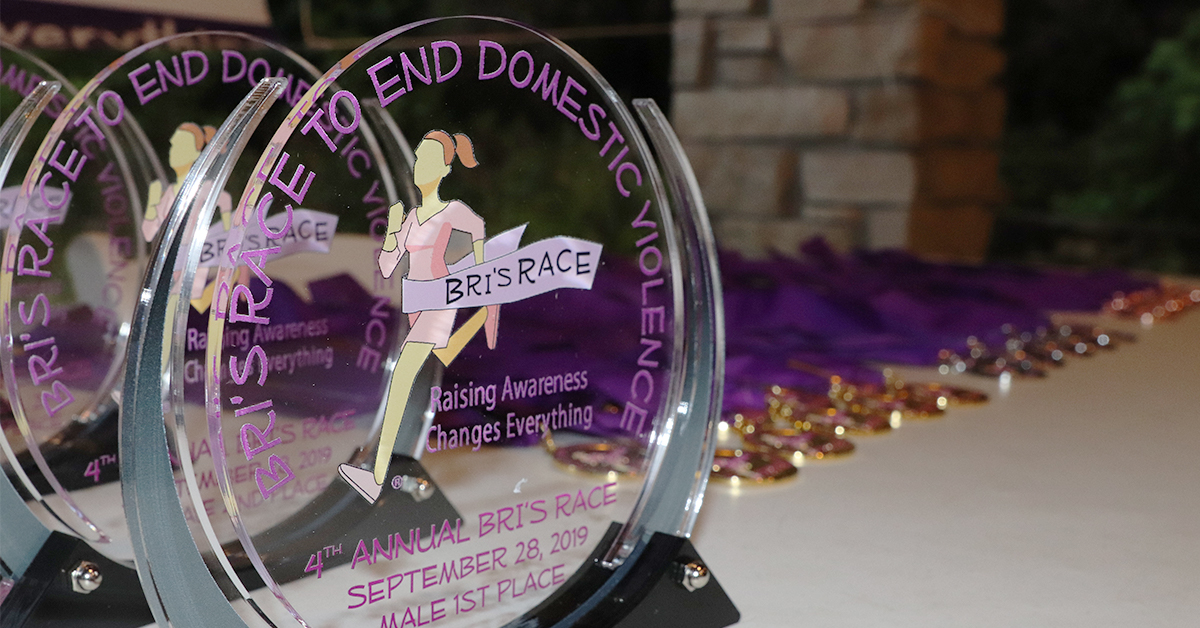 “It’s one of those silent things,” said Sarah Fink, Director of Porter County CASA. “It’s a heart-wrenching situation, and in many cases, it’s such a difficult situation to deal with that sometimes the best thing you can do is be present.”

So that’s what dozens of individuals of all ages did at the 4th Annual Bri’s Race to End Domestic Violence on Saturday at the Gabis Arboretum at Purdue Northwest in Valparaiso.

The competitive 5K run/1K walk event honors the memory of Brianna “Bri” Hefner-Ballor, a young, athletic, highly educated professional woman who was tragically killed by her husband in 2015 during a tumultuous divorce. Bri was a runner herself.

Since then, her friends, coworkers, family, and loved ones - and now community members who never even knew Bri - have gathered to raise funds and awareness for domestic violence in hopes others will see that it can happen to anyone and seek help.

According to Fink, about 11 percent of CASA cases in 2018 involved domestic violence. Between January and September 25, 2019, that number was already at 13 percent.

“Domestic violence is increasing, and we want to create an atmosphere of support for people in that situation. If just one person experiencing domestic violence saw all the people here today, maybe it would inspire them to get help,” Fink said. “That’s what this is about - standing with people. Walking with people. And just being present.”

As Porter County Circuit Court Judge Mary Harper was walking toward the race check-in area, she stopped for a moment.

“I just want to pause here. Look at this beauty around us. Look at how peaceful it is. This is the perfect place for Bri’s Race,” she said. “Gabis Arboretum and the folks at Purdue Northwest have been gracious and are a great team to work with.”

Harper holds the cause close to her heart. Bri worked for her at the Porter County Probation Department. Harper originally had tickets to see one of her favorite country bands - Nitty Gritty Dirt Band - but easily gave them up when the race date was picked.

“This is more important. I’ve worked on the Mayor’s Commission on Domestic Violence for a quarter of a century or more. When it hit so close, I said, ‘We have to do more than address the legal aspect of it.’ I have to do more than go to meetings,” Harper said. “We’re not just here to raise money. We are here to reflect on what we can do to prevent domestic violence as a community.”

The event is up to more than 20 corporate sponsors. Community organizations such as The Caring Place and The Amanda Project brought teams and offered support.

Denise Kavanaugh, a CASA volunteer, rallied fellow CASAs Nicol Barrish and Robin Biggs, among others, to join the event. She is so passionate about CASA’s cause that she made up her mind to join the organization before she even moved to the area.

Kavanaugh met people who were good friends with Bri’s family at a barbecue when she was visiting from out of town. Bri’s story resonated with her, and she knew she had to be part of CASA as soon as she relocated to Northwest Indiana.

“When I moved here, the first thing I did was talk to Cissie [CASA staff member] to become a volunteer,” Kavanaugh said. “It has been a wonderful experience. The kids I work with are incredible. You see how they come out of their shells and transition to healing. It’s wonderful work, and I’m grateful to experience life with them.”

Deana Harris, assistant chief probation officer in Porter County, worked with Bri. She and coworkers John Bryan and Matt Bonick attend the race every year in her memory and honor.

“She was a sweet person, and she was kind to everyone she met. We tried to steal her from detention and bring her over to the probation department,” Harris said. “Her smile was infectious, and kids responded really well to her.”

Bryan said what struck him most was when Bri’s former juvenile detention clients came to her memorial service.

“She genuinely cared about the kids, and it showed,” Bryan said. “This event is about highlighting the fact that domestic violence happens to everyone, but it can be invisible. We are here to bring this issue out of the shadows.”

It can be extremely difficult to speak up about domestic violence, but organizations like Bri’s Race are a good reminder that there is always someone willing to listen. Don’t be afraid to reach out for help.

For more information about how to get involved with Bri’s Race, visit http://brisrace.org/. To get involved with Porter County CASA, which advocates for many children who are victims of domestic violence, visit https://www.fysb.org/casa-program. The next CASA volunteer training is Nov. 4, so call or email today to inquire about details: 219-464- 9585 or email casainfo@fysb.org.