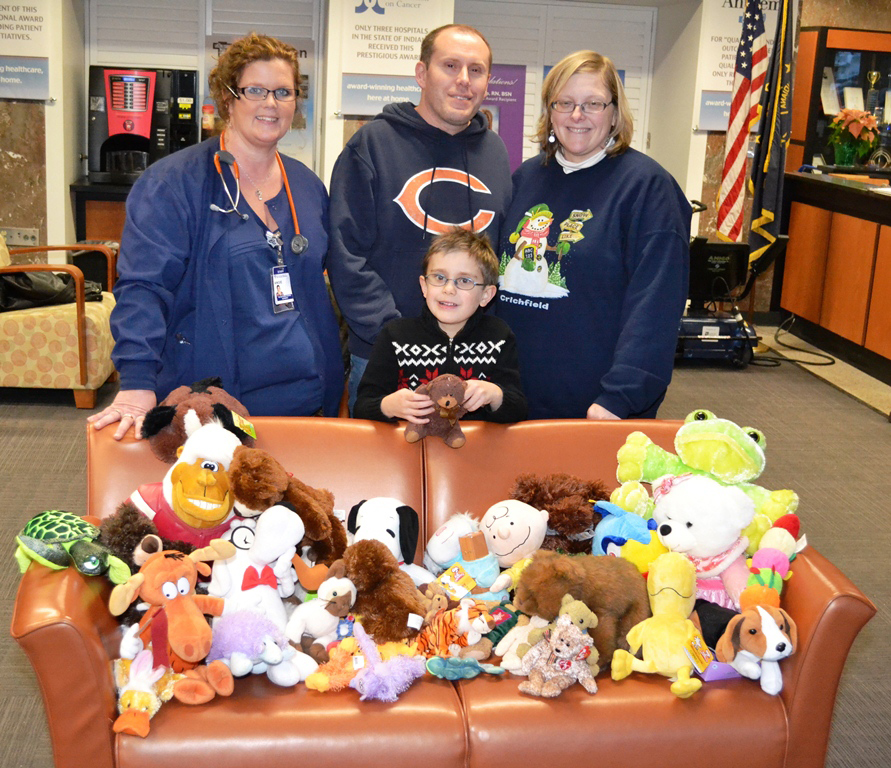 At the tender age of 7, William “Will” Tallackson of Michigan City already exemplifies the credo of it being better to give than to receive, and not just during the holiday season. After having his tonsils removed two years ago at Franciscan St. Anthony Health-Michigan City, he was given a stuffed teddy bear, which he is shown holding, by registered nurse Angie Margraf (left, standing behind him, with his parents, Andrew and Alice Tallackson), to help comfort him. He named it “Angie Bear,” after her.

“We have a crate of stuffed animals upstairs that we give to children after procedures, to help them feel better,” Margraf said.

The parents and nurse became acquainted and they informed her in September that for their son’s seventh birthday, in October, he wanted party guests, in lieu of gifts, to bring stuffed animals, that in turn could be donated to the hospital to help other children. Approximately five large plastic bags, containing some 70 stuffed animals (the remainder of which are shown in the hospital lobby Dec. 12), were donated and delivered shortly after the party.

“I think what Will did was awesome,” Margraf said, adding, “I don’t know of many adults who would do this, let alone a 7-year-old.”

Will said he got the idea after attending a friend’s party where items were donated to help shelter animals. The youngster was presented a certificate of appreciation from Laura Mannion, Franciscan Alliance Foundation director of development, for his “outstanding contribution” to the pediatrics unit; and gift cards on behalf of Trish Weber, hospital vice president of operations and chief nursing officer.

The parents praised the hospital staff for its services, which also have been provided to Andrew Tallackson.