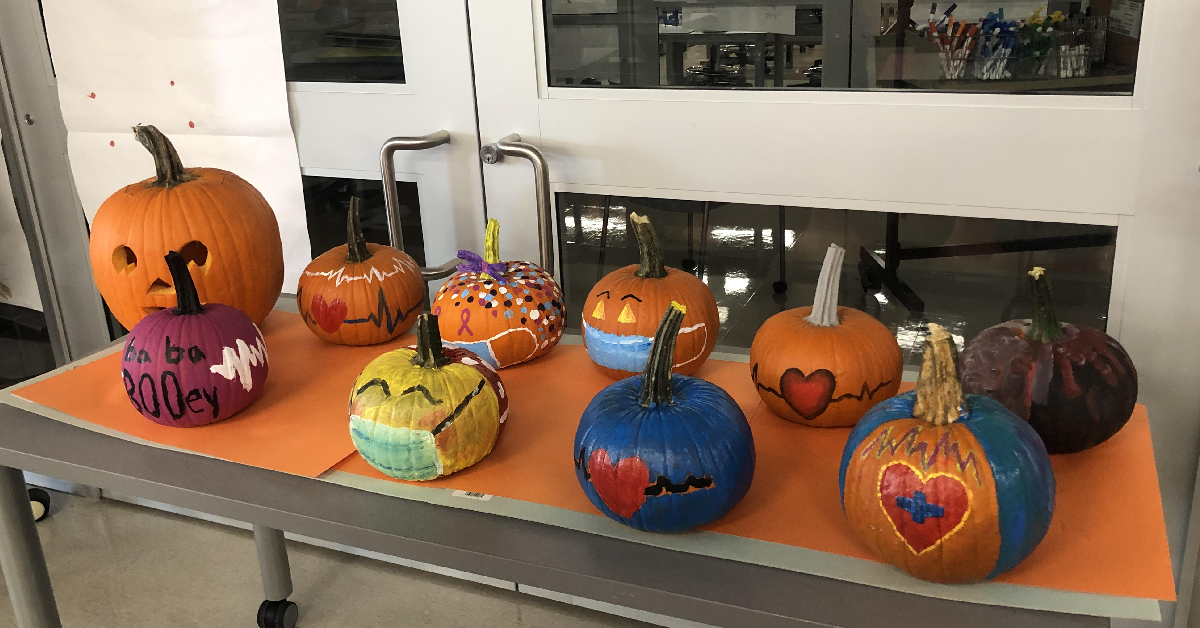 “The cliche answer [to why she wanted to become a social worker] would be to ‘change the world’ which isn’t wrong," Sickinger said. "I believe that every single person matters and sometimes our most vulnerable or at-risk populations need someone to listen and help them have their own voice.”

Due to COVID-19, Sickinger has had to find ways to connect with the students she works with. To continue building a connection with her students, even when they are online, Sickinger began her Canvas page titled “Self-Care with Sickinger”. “Social work is best practiced face to face, but when that option was taken from us, I knew that I still wanted to be readily available for students during remote learning,” Sickinger said.

She built this connection with the students virtually by posting self-care tips, memes, and videos asking her students questions. She also gave access to students to message her with anything they needed.

“My favorite part about working with students as a school social worker is the relationship that I am able to form with them and their parents," Sickinger said. "I love meeting a student as a freshman who may be struggling for one reason or another and watching them grow and change into amazing humans.”

For good reason, the students Sickinger works with are extremely grateful for all the things she does to help and support them.

“When my name was called, I was shocked but extremely excited and honored,” Palmer said.

Palmer surely earned her right to the crown, as she is involved in many extracurriculars in and out of the high school, including Team LEAD, the Amanda Forum, Key Club, Spanish Club, 300 Club, Yoga Club, National Honor Society (NHS), Windy City Warmth, and Educational Helpers. She also participates in the youth group at Valpo Nazarene Church.

Palmer is also an athlete at VHS and hopes to continue her athletic career.

“I have been playing volleyball since 7th grade and hope to play on an intramural team in college," Palmer said.

“I hope to pursue a degree in health science, and then go to Physicians Assistant school and specialize in Dermatology," Palmer said.

Palmer also worked 40 hours a week as an essential worker at Strack and Van Til at the beginning of the pandemic, doing her part to make a positive impact amid difficult times.

The Future Medical Professionals club at the high school held a blood drive on October 15th. The blood drive was hosted by Christ Lutheran Church in Valparaiso.

The blood drive had an extremely successful turnout, as in the six hours that it was open, 98 pints of blood were collected, according to Senior and Future Medical Professionals club member Serena Shughoury.

“We had to message everyone who was signed up after 5 p.m. to tell them that we were too busy for them to come in,” Shughoury said.

$980 was raised from the blood drive, which the club will be able to donate to any organization of their choosing. The club has not yet chosen which charity they will be donating to.

This month, Future Medical Professionals is focused on spreading awareness for diabetes. The club plans to create a school wide day for awareness through asking students and teachers to wear blue clothing on Fridays. This is in honor of National Diabetes Awareness Month, which is in November.

The varsity football team at the high school has continued to have success this year. Last year, the team made it to the state championship for the first time since 1975. Sadly, the Vikings lost to New Palestine.

This year, the team has an undefeated record so far at 7-0. On November 13th, the Vikings will face off against Mishawaka at the IHSAA Regional game. If the Vikings do beat Mishawaka, they will go on to semi-state, and even the state competition for their division, 5A.

Although COVID-19 has caused a lot of events to be cancelled or adapted, football has remained relatively untouched. Other than a few game cancellations, the season has continued.