I have always liked beef barley soup. Those little white pieces of barley are pretty cool looking, even though they don't taste like anything. I think some component of barley goes into making beer. I don't drink but I do remember the commercials that talked about barley, malt and hops. 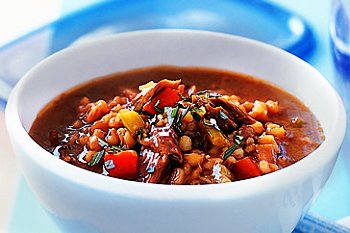 One day I decided to try to make some homemade soup. I got out the seldom used crock pot and went about collecting the soup fixings. I was very careful about the ingredients. I went to the meat market and got the leanest beef stew meat I could find. I cut and chopped vegetables until I had enough for an army. I wasn't sure about what barley looked like in it's uncooked form. I went to the grocery store on a blind search for barley. I'm sure you have all done this. You go to the store and walk up and down every aisle until you see the thing you're looking for.

As I get older, my memory gets worse so I use the technique to help my memory. I have this uncanny ability to remember a phone number that I have only dialed a couple of times, but I can walk out of my office at work and take four steps and completely forget what I had set out to do. It's very frustrating. I'm sure you all know what I mean.

After completing my quest for uncooked barley I returned home to finish preparing the soup. I must admit that at the time I was a novice at making soup or what I like to call stew soup. I like my soup to be very thick with ingredients. After I put the meat and the veggies in, I was curious about liquid for the soup. I wasn't sure whether the meat from the juice would produce enough liquid or if I had to add some. I made a few calls and couldn't find anyone at home to get an answer so I finally decided to add a little water. I figured I had a 50/50 chance of being right. The last think that was left was the barley. I looked for instructions on the box, but I couldn't find any. It was a Quaker Oats brand and it didn't even have any recipes on it. I didn't know what to do next. I kept looking at the box and it didn't look very big. I liked barley a lot, so I did what any red blooded American male would do, I improvised. I took the box of barley and put about half of it in the pot. It didn't look like enough so I put the rest of the box in the crock pot. Being young and single at the time, there was a certain learning curve when it came to cooking. Those days I ate things that I couldn't even look at now, but you live and learn. When we were teenagers growing up in Glen Park, a bunch of us that worked at Pete & Snook's, all learned to cook in the back room of the pizza parlor. Snooky would make some great meals out of that kitchen and we all learned by him making us do the cooking and he would direct us.

Back to the soup. I went to work and turned on the crock pot as I left. I didn't know how long it should cook or how long I should leave it on. I was in my early twenties and I had a job selling cars at the time. When I got to work, I told my fellow salesmen that I was attempting beef barley soup and they were all anticipating tasting the soup. They had always enjoyed everything I ever made, pizza, tuna salad, tomato salad and pasta. We worked long shifts so I figured the soup would have plenty of time to cook. At the time we worked till 9 p.m. so about 7 p.m. I went home to get the soup for everyone. The guys said they would cover for me. Well when I got to my house, only a couple of miles from work, there was a big surprise for me. I had no idea how much barley expands. I put the whole box in and there was barley all over the place. It also kind of exploded and was on the walls and the ceiling. I couldn't go back to work because it took me about four hours to get everything cleaned up. Now in my old age I found the secret to making good soup at home. Now, where is that can opener?