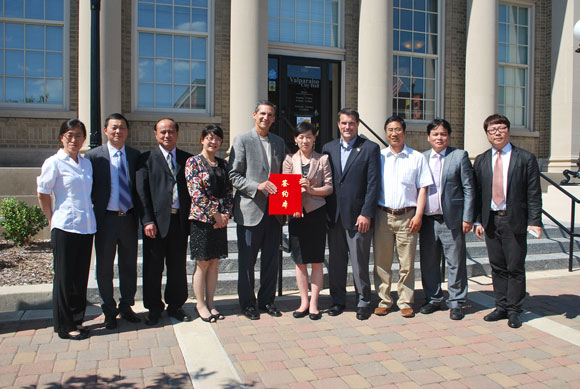 Earlier this month the City of Valparaiso helped host a visit from a delegation of Chinese leaders from the Nanhu District of Jiaxing Municipality, Zhejian Province. A highlight of the visit was the signing of an agreement between Valparaiso and the Nanhu District to establish friendly relations. “Going forward, we have established a relationship with Nanhu District. We’re excited to share ideas with them and to learn from their new perspective,” said Mayor Jon Costas.

The relationship between the two cities was initiated in 2010 when a delegation from Valparaiso visited China on a privately funded trip. Valparaiso’s Economic Development Director Matt Murphy was a part of that initial delegation and was on hand when the agreement was signed. “Our Chinese friends can teach us so much and it has been gratifying both to visit them in their surroundings and to host them in our own city,” said Murphy.

According to the agreement, “the two cities will develop and exchange various types of information in the areas of economy and trade, culture, education, sports, public health, government, civil service, and more etc. to promote common prosperity and development.” Valparaiso University’s Confucius Institute has been invaluable in helping to establish the ties between the two cities, providing logistical support and translation service.