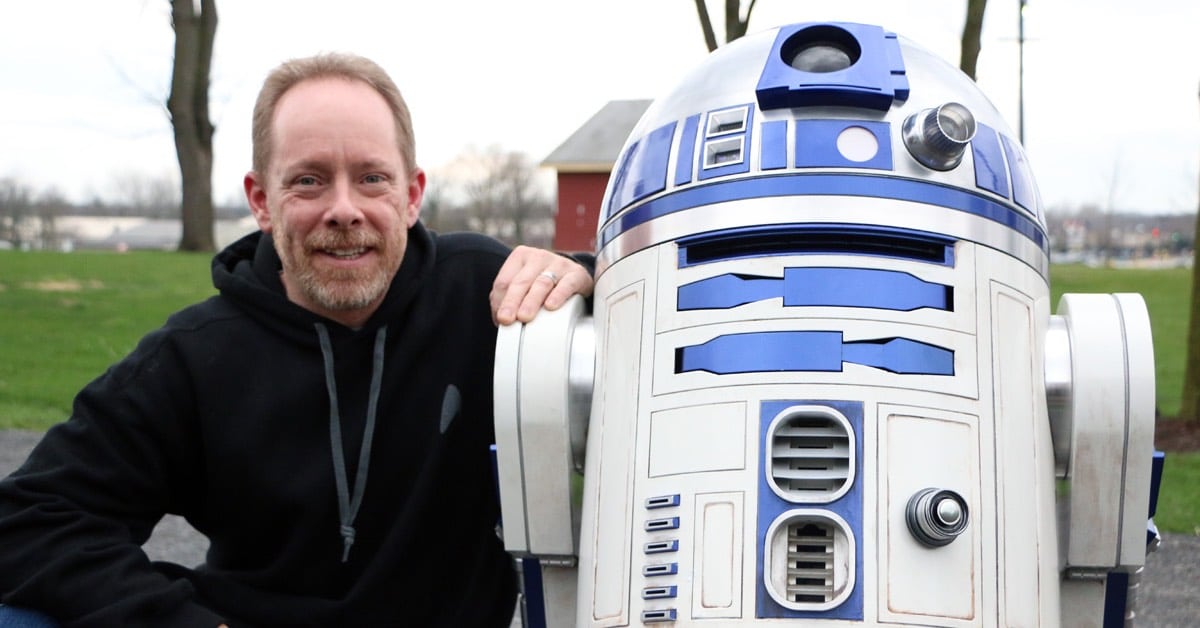 Building an operating near-replica of Star Wars character R2-D2 requires a massive amount of time, knowledge, and resources. Aaron Treble, a Valparaiso resident, worked for 6-8 hours a day for two years to build his now 250-pound droid. “That was after about 6 months of research,” he said.

R2-D2 can spin his top dome completely around, flashes lights, and plays music. It can roll on three legs. The robot is even programmed to flash lights on and off by itself so that R2 appears to be alive even when Treble is distracted during events.

“I believe movement, lights, and sound are most important to making him feel real, so I focused on making those features to the best of my ability.”

When asked if the droid is “real”, Treble can’t help but think his R2 is more real than the droids from the original films because many versions of R2’s were capabale of performing everything that Treble's R2 is capable of.

“In most cases, droids built by the R2 Club members perform better than the movie droids since they’ve been engineered over the years to perform multiple tasks,” Treble explained.

Lucasfilm works pretty closely with the Star Wars fan community. Treble submitted an application to Lucasfilm along with photographs and specifications to his droid. After a few months, his droid was certified and is now available for official Star Wars events as an acceptable model of R2-D2.

Treble has been on a unique adventure thanks to R2. He has visited schools, summer programs, churches, and charity events. But for Treble, visiting kids is the most fun part of traveling with R2-D2.

“The older kids tend to be in shock,” he said. He recently learned that showing R2 to younger people is about more than the way their faces light up.

“I was invited to a preschool event, and I didn’t see what I could possibly tell preschool kids about him. He's all engineering, programming, and machining. The following day after I talked to the class, they sent me a picture. One of the boys wanted to build a robot. He was inspired, and with tinker toys, the little blocks and sticks, he actually built a robot,” Treble said. “It’s really very touching, this kid built a robot out of toys, so what’s that going to do for him in the future? What’s that going to mean to him as far as being a scientist or being involved in math?”

He also was able to visit a Star Wars Convention in London, where he met Kenny Baker, the original actor behind R2-D2, who signed Treble’s droid. Treble was once able to show off the droid in the lobby of the Shedd Aquarium and has taken the droid with him to the United Center to show off during Chicago Bulls games.

According to Treble, the public appearances make up for the hours he spent working on the robot. “The best part for me is seeing people going about their daily lives, and the moment they see R2-D2, you can see their expression change. I see people smile all the time, and that’s so worth it.”

“I tend to leave the door to my shop open in the summer. People who have seen my projects come by and they can’t help ask, ‘Hey! What’s in this heavy box?’”

Some of the friendships he has formed go much farther than the people who visit his home.

“I have made friends literally all over the world. I’ve shared about my work and made online friends. When I travel with my wife, I’ll contact them, and we meet up. I’ve even been able to meet people pretty high up in the Star Wars Industry,” Treble said.

Treble has advice for anyone who wants to take on something, whether its a small design or a project as huge as R2-D2.

“Whatever you like, do it with passion and commitment. No matter what anyone says, just do it, and do it to the best of your ability, but be realistic about your goals. When you work at something, you will learn and improve, so don’t be afraid of failure or results that are less than you expected. Learn and move on. No matter what your project is, don’t underestimate the value of diligent research.”