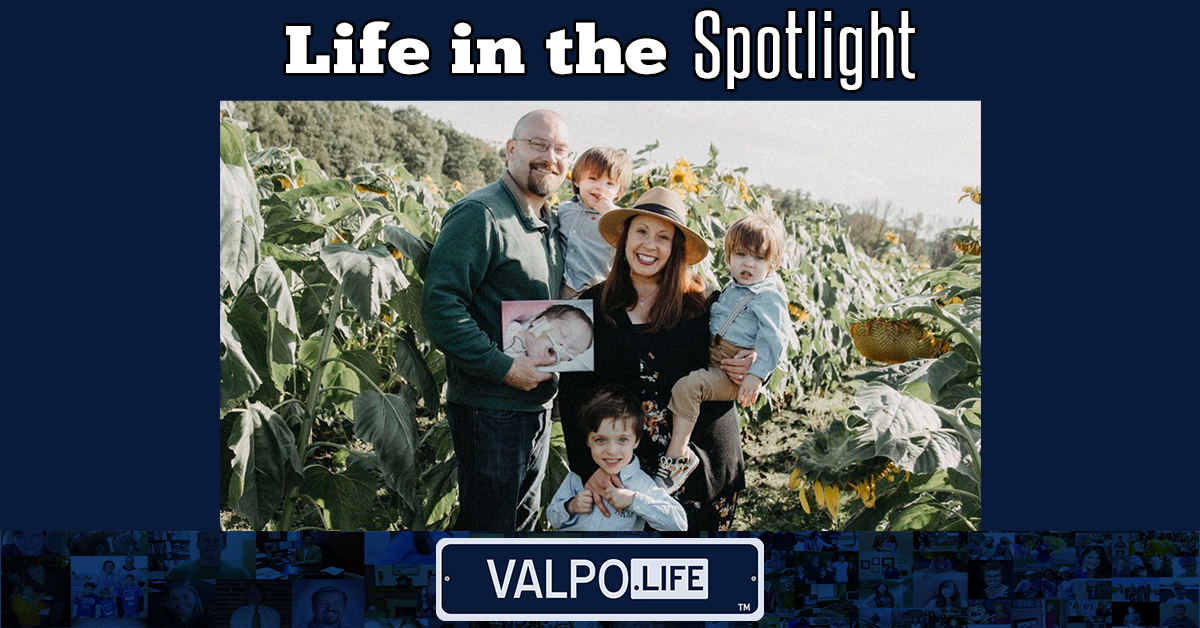 Amelia Kowalisyn, her husband Joe, and their beautiful family have been through a storm in life. But they’ve managed to turn that storm into something good, and their story is as touching as it is powerful.

The storm started in 2015 when Kowalisyn was 31 weeks into her pregnancy and gave birth early to the couple’s first children, Alex and Emma.

“The reason Alex and Emma were born so early is that Emma had a stroke in utero,” Kowalisyn said. “At a week old, Emma was airlifted to Riley Hospital for Children in Indianapolis because it was such a serious case. Alex had to stay here at Porter Regional Hosptial’s Neonatal Intensive Care Unit (NICU).”

Even though Alex also was struggling, the level of care at Porter Regional Hospital’s NICU was sufficient, so the parents divided their time between their babies.

“We were there every three days,” Kowalisyn said. “We went back and forth between Indy for Emma and Valpo for Alex. When we would go to Riley’s, people would provide us with care packages filled with snacks. It was so sweet.”

Going from one hospital to the next, the Kowalisyns found the packages to be their lifeline. Friends, family, and even strangers wanted to show their support during the couple’s journey.

“Every time we received a package we cried,” Kowalisyn said. “They really kept us going when we were in the NICU, especially in a children’s hospital. You can’t really leave your child’s room because you don’t want to miss when the doctors are doing their rounds. If you miss their rounds, you’re going to miss out on crucial and vital information about your child’s wellbeing,” she said.

After nearly a month of long car rides, waiting for doctors, dozens of care packages and prayers, Emma passed away at 23-days-old as a result of the stroke.

“Emma’s stroke was so severe that it took out both sides of her brain, down to the brain stem,” Kowalisyn said. “Her stroke was one of the worst ones they had ever seen at Riley’s at the time.”

At one of the darkest moments in their storm, the Kowalisyns started to see the light at the end of the tunnel.

“When Emma passed away, we asked people in lieu of flowers, to bring care package items and that’s kind of where it all started,” she said. “Alex was in the NICU for about another week after she passed. He ended up coming home the day after Emma’s funeral.”

After losing her daughter, Kowalisyn decided not to return to her job in real estate and found a new purpose from her journey.

“Shortly after we lost Emma, we established Emma’s Footprints,” Kowalisyn said. “Then shortly thereafter, we decided that we wanted to help families who had been through what we had gone through as well. So we started providing bereavement package for families.”

Since starting the non-profit in 2015, Emma’s Footprints has provided countless care packages for parents with babies in the NICU, as well as bereaving parents who have lost an infant. The NICU care packages include snacks and activities, and the bereavement packages include books about grief, a keepsake piece of jewelry, and comfort shawls. New this year, Emma’s Footprints has started providing Rainbow Baby Packages to families who have children after the death of a sibling. These include a bible, a book, a rainbow baby onesie and bib, and a mustard seed necklace.

“It means the world to me to be able to do this and help families who have gone through a similar story. I know what it’s like to be in the NICU and I also know what it’s like to lose a child,” Kowalisyn said. “We’ve also had four miscarriages as well as losing Emma and we know the meaning of having a baby after a loss. It’s really special to my heart that I can do this in memory of my daughter and in honor of my three sons who were in the NICU, too.”

The care packages are provided to all of the local hospitals that have NICUs, and to Riley Hospital for Children. Emma’s Footprints volunteers put together and deliver the packages in person to the hospitals and parents, or ship them to families as needed.

“It’s really like a packing party,” Kowalisyn said. “Over the years we’ve sent out and delivered thousands of care packages. Our services all depend on the funds we have from the money we have raised.”

Kowalisyn believes she and her husband are stronger to have weathered their storms. Through her journey, she learned the importance of finding a life balance to get through the pain. Kowalisyn’s balance comes from her other job as a travel agent specializing in Disney World vacations.

“Finding a balance is so important,” Kowalisyn said. “It’s been an emotional whirlwind in the most beautiful way to actually be apart of these families’ stories and help them. Having that balance outside of the grief has been very good for my heart.”