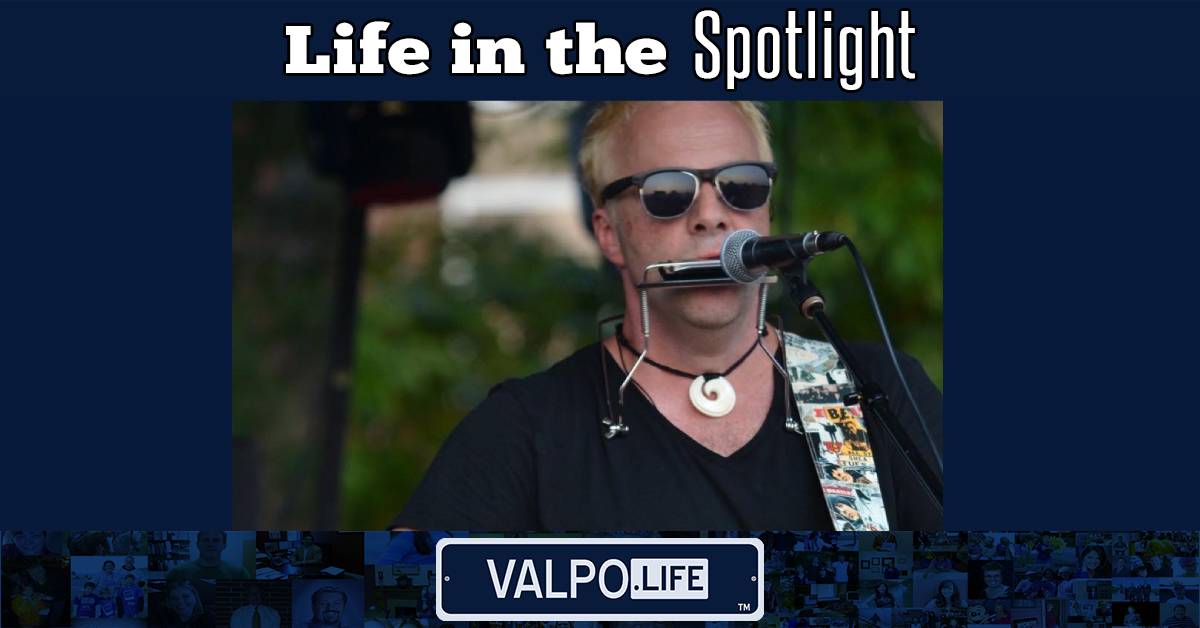 When you get music, music gets you. Chad Clifford let music into his life when he was a wee lad of five, and it’s kept him rapt ever since.

“It’s something that’s in my being,” Clifford said. “I can’t see doing anything else. It’s just a huge part of who I am.”

Clifford is a Valpo music scene mainstay, and you’ve probably seen him at any of the hundreds of shows he plays each year. His support of the scene goes beyond performing, though.

In 1997, Clifford became the manager of Front Porch Music, and he took over the business in 2007.

“I fell so in love with the business that I just had to buy it,” Clifford said. “It was a great opportunity to use all of my skills, from being in bands to my Music Management degree from Columbia College, in one place.”

Front Porch Music is a musical cornerstone in Valpo. They offer lessons, sell and repair instruments, and offer stage space in the basement where they host concerts, student recitals, and open stages.

Clifford married his high school sweetheart, Michelle, 26 years ago. All of their sons are musicians in their own right, and the two eldest enjoy working at Front Porch.

“It’s kind of nice that they’re taking on the family business,” Clifford said. “It’s a good little job for them to make some money while they figure out what they want to do. If they decide this is it, that’s great. But I want them to do what makes them happy. And until they find their thing, it’s nice to have them here.”

Like Clifford, his kids started playing music very young. Clifford picked up a guitar when he was only five years old.

“I used to do shows for my grandma and I’d sing and play my guitar out of tune,” Clifford said. “I’d always tell people I was going to be a musician when I grew up, and they thought it was cute. They talked about it as something I could fall back on.”

Instead, Clifford made music his life.

Clifford found like-minded musicians in middle school, and by the time they were in high school, they’d formed Digital Hair.

After graduating from Valparaiso High School in 1987, Digital Hair made the big move to Los Angeles.

“It was really cool to live on Hollywood Boulevard,” Clifford said, “but we realized very quickly that everybody was living in Hollywood, so it was hard to make a mark with everybody crowded into the same space.”

Eventually, Clifford moved back to Valpo, but not before playing a bunch of shows with Digital Hair.

“We still get together all these years later and do a mini-tour every year,” Clifford said. “It’s all 80s stuff. U2 and REM. Fun stuff that I don’t play otherwise.”

“We’ve done everything from backyard parties to weddings to the House of Blues,” Clifford said. “It’s great because no two shows are exactly the same. We have 400 covers to choose from, so we can really cater each show to the audience. We don’t work off a setlist; we just go with the way the night feels.”

They’ve released two albums, and all of their music is available on Spotify, Amazon, and Apple.

“It’s fun to ask Alexa to play one of your songs and she does,” Clifford said.

Clifford also enjoys playing solo shows to the tune of a couple hundred each year.

“It’s more intimate,” Clifford said. “It’s just me, the audience and my guitar. It’s kind of music in its purest form. The best is when everybody’s singing along.”

To round out Clifford’s jam-packed schedule, he also fronts Megabeatles, an 8-piece Beatles tribute band. It serves to satisfy his nerdy side.

“We really study the intricacies of their songs and present them as accurately as possible,” Clifford said.

Megabeatles is looking forward to an upcoming show at the Acorn Theater in Three Oaks, Michigan in November, and recently was asked to play at International Beatles Week in Liverpool in 2020.

“It’s going to be really cool to play the Cavern Club,” Clifford said of the main venue the Beatles came up in.

Clifford understands how fortunate he is to have been able to turn his “something to fall back on” into a very busy – and fulfilling – way of life.

“I’m happy that I get to do what I love every day,” Clifford said, “but just like anything, when you work on something you love it becomes hard work.”

Clifford uses his talents for the betterment of the community, which alleviates some of that hard work. He teaches guitar at Valpo elementary schools and the Gary Webster Young Musicians Program. He also partners with Recovery Connection and Porter County Substance Abuse Council to teach guitar in an effort to help Porter County residents in recovery.

“I’ve done a lot of things I’ve always wanted to do,” Clifford summarizes. “I’m happy I found a pretty good way of making a living at something I love.”