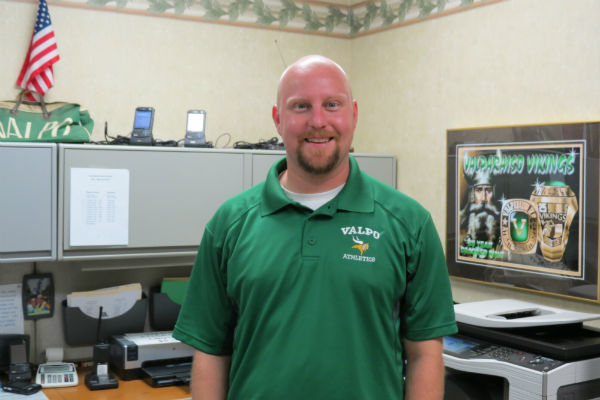 Are you ready to meet another interesting person? I’m pleased to introduce Adam “Boomer” Nellessen. He is the head coach for the Valparaiso High School girls cross country team, the boys swimming and diving team, and the girls track and field team.  As a triple threat, Nellessen is this week’s Valpo Life in the Spotlight.

You’re probably curious as to where the name Boomer fits in with Nellessen. He was graced with the title when he was a toddler.

“The story is: When I was learning how to walk, my parents would get on either end of the hallway and try to walk me back and forth between the two. And I’d run into walls and stuff like that. I wasn’t very straight as far as that goes,” Nellessen said. “And you know how parents try to be cute? My dad was like, ‘Oh, you going to go BOOM! You’re going to go BOOM!’ And that slowly kind of picked up and then by the age of twelve I broke my left arm three times, my nose twice, two fingers, and three toes. I was just being a boy.”

The name has stuck ever since. Nellessen was born and raised in Valparaiso right on Sheffield Drive, and when he was twelve his family moved one block south to Lorraine Drive. Nellessen went to school on a swim scholarship at IUPUI where he received a degree in exercise science. He then received a job with InterContinental Hotels where he ran indoor water parks. After that he became the aquatics director for Carmel’s swim club few a few years. When Nellessen met his wife it was love at first sight, so he left his job and moved to Florida where she taught at the time. They lived in Florida for two years then made the decision to come back to Indiana to be close to their families. Now Nellessen and his wife, who is a second grade teacher, own a home on Campbell Street.

Nellessen has worked at VHS for four years. He works at the attendance office during the day and coaches before and after school. He also runs a disc jockey business with his father called Boomer’s DJ Service. He is also attending Indiana Wesleyan University for his second Bachelor’s degree in science, physical education and health. Then he plans to go for his Master’s degree after that. Busy guy!

“People wonder why I just don’t focus and get school out of the way but it’s so tough to be away from them -the girls- and understand the issues that they deal with when they come in after school. And it’s so nice to be here throughout the day. You get the pulse of the school and what’s going on and you know a lot of things when they happen or before they happen. It helps me coach better,” Nellessen explained. “It allows me to be involved and be a better coach. Kids have gotten older, no matter what age they are. They’ve gotten mentally older quicker. And you can tell. You’ve got fourteen and fifteen-year-olds thinking like I did when I was eighteen and a senior. There are a lot of good kids here and I thoroughly enjoy it.”

“That’s a excellent question,” Nellessen laughs. “The highs with girls are much higher. So the excitement, the happiness, if they do well -so much higher than with the guys. But the lows a so much lower with the girls. The guys are just kind of even-keel. I think it’s easier to sometimes deal with guys because they can get mad at each other and the next day it’s over.”

Something that is notable about Nellessen is that from 1994-1998 when he attended VHS, he was the first twelve letter winner. He played three sports during all four years of high school and received letters from each sport each year. He even competed in ten state meets. Impressive! It seems only natural that he come back and coach three sports then at his alma mater. How Nellessen gets involved in the community is with his DJ business. They’ve worked the March of Dimes, the Taste of Valparaiso, the Taste of Porter County, dances at the high school, and other events around Northwest Indiana. His wife works with him in his DJ business, too, so they are able to spend time together. During their free time, Nellessen and his wife putter around Valparaiso.

“Downtown Valpo is just phenomenal. It really is. There’s no one that touches Valpo with the restaurants and the atmosphere that they have. And they survive! You would think, ‘At what point is the restaurant thing around here going to be done?’ But Valpo people love to go out and just try different things and be part of it. So we definitely enjoy going out and trying new things,” Nellessen said. “I also love Valpo because it’s a small town community in a bigger town, and you’re close to Chicago if you really want to get that experience. You’re in a great part of the state and there are a lot of things to do. It’s a great place to raise a family.”

In the future, Nellessen wants to continue his education as stated before, he’d like to get into the athletic administration part of education, he and his wife would like to start a family, and he hopes to take over the DJ business when his dad retires.

Any nuggets of wisdom that he would like to pass on to readers?

“My dad gave me a road map when I graduated from high school and said that his dad told him that the roads that take you away from here always bring you back. And think that kids need to understand that people are always here for them, and just because they leave or move on doesn't mean people stop caring for them or stop caring what happens to them,” said Nellessen. “It’s kind of cheesy, but it’s stuck with me ever since I graduated high school and i still have the map!”

It’s amazing how far a kind gesture or words can go. This is proof that a little kindness goes a long way. If ever you end up at the VHS attendance office, or at a swim, track, or cross country meet, say hi to Boomer Nellessen and shake his hand. You’ll be glad you did.