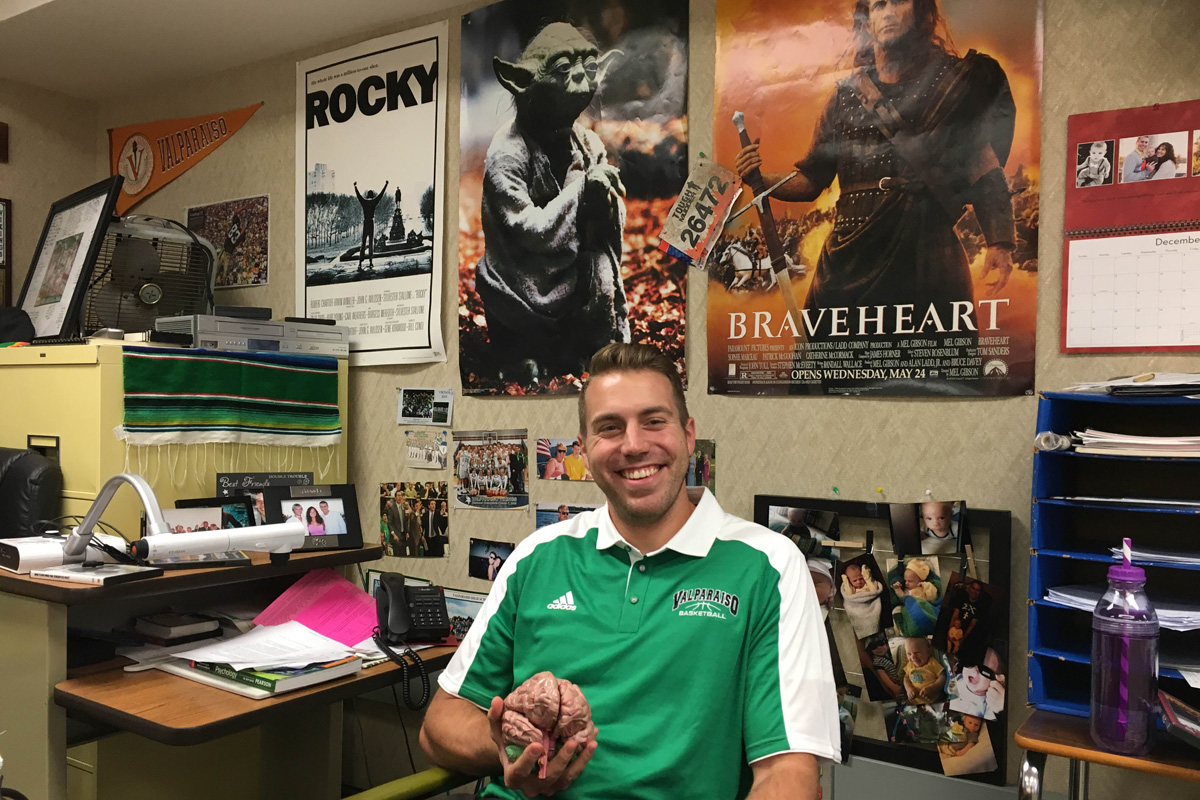 If you have ever heard the word “syllabi” proudly shouted while you wander the halls of Valparaiso High School, Ben Lieske is more than likely to blame. His tradition of excitedly sharing his favorite word with his students on the first day of class started 11 years ago, when his VHS teaching career began; however, his positive energy has been gracing the school since 1998, when he was a student there himself.

Lieske, native to Valparaiso, spent his own four years of high school as a self-proclaimed “half nerd, half jock.” When he wasn't lugging around the many textbooks of an honor student, Lieske was on the basketball court. His love for learning and his passion for the game are still evident today, as he teaches history and psychology, while also serving as assistant coach of the boys basketball team.

“Valpo was and is a wonderful place to grow up in and was extremely crucial to my development as a person,” said Lieske. “I had wonderful teachers who challenged and inspired me, and when I got to the end of my high school years and knew that I wanted to be a teacher, it was largely in part to the great mentors I had [at Valparaiso High School]. I wanted to be able to have the same impact on kids that they had upon me.”

Before Lieske’s return to VHS, Valparaiso University became his home as he earned a degree in history and secondary education, minoring in Native American studies. He then earned his Master of Arts in Liberal Studies with a concentration in history and completed his student teaching at Bishop Noll Institute.

Though he credits both his parents and previous teachers for his love for history, Lieske said, “I was particularly inspired by Ron Janke and Alan Bloom at VU. Dr. Janke's passion for Native American history was contagious and one of the main reasons I minored in Native American Studies. Alan Bloom was one of the most inspiring human beings I have ever been around. His passion for his students and his subject matter is something I try to mimic as a teacher. If there is one person I can point to who has influenced me academically and professionally, it is him.”

With his mother employed at VU and his father at VHS, it only seemed logical to start his first year of teaching in Valpo, where he could appreciate the strong family presence in the area.

Lieske started off as a football coach as well, but gave it up two years ago when he and his high school sweetheart and wife Rachel had their first son. His love for his family is quite apparent between the wall of baby photos in his classroom and the many analogies to raising a child that he utilizes in his lessons. Lieske truly exudes passion in whatever he is thrown into.

“I have been blessed with getting to teach subjects that I am passionate about,” said Lieske. “When I teach World and US History, I love learning from the past to see how it affects our future, and I hope to influence my students so that they are active and informed citizens. My psychology classes are a true joy because my students are usually naturally interested in the subject matter, and I think that subject matter is very helpful towards understanding ourselves and the world that we live in.”

When Lieske isn't raving about his favorite psychologist Philip Zimbardo, he is court side with his fellow coaches and athletes. After knowing or playing for Valpo basketball legends Virgil Sweet, Skip Collins, and Bob Punter, Lieske has an understanding of Valpo tradition on the basketball court.

“My favorite part about coaching is seeing my players develop as players and people, said Lieske. “Competition allows for a special challenge that helps drive us to new levels of excellence that can be difficult to mimic anywhere else. Team sports such as basketball and football can be especially amazing because they require such cooperation and trust, and it is truly amazing to see what a few individuals can accomplish when working and sacrificing for one another. My players and students are inspiring. One of my favorite quotes that I have stolen from Matt Thomas, a mentor of mine, is ‘I don't motivate my players, they motivate me.’ This makes coming to work each day a joy.”

Whether you know Lieske as a coach, teacher, friend, or colleague, it is safe to assume he has positively impacted you in some way.