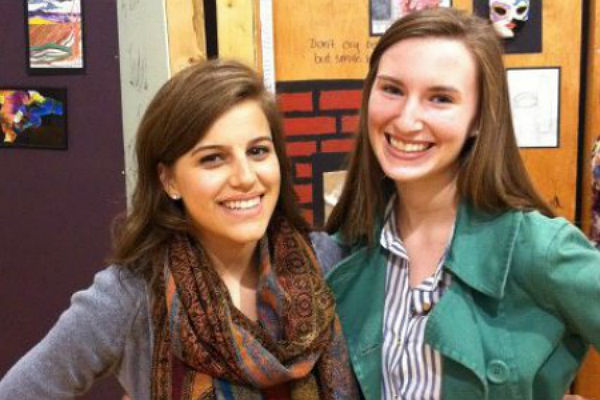 Fearless leader of the of the overlooked powerhouse that is the Valparaiso High School Speech and Debate team, Caroline Koenig approaches me with a bright smile as we look for a place to conduct this weeks Valpo Life in the Spotlight interview. Hair neatly pulled back into a brown ponytail and wearing an olive chunk knit sweater with black skinny jeans, Koenig does not exactly fit the stereotyped Speech and Debate team member. With a disarming smile and a calm, but commanding voice that fills each room she competes in, Koenig says hello, gives a charming laugh, and walks with me into a quiet hallway to find a place to speak. I have been lucky enough to know Koenig for almost as long as I can remember and am so obscenely fortunate to be able to count her as one of my closest friends.

This year as a senior Koenig has become the leader of high school speech and debate chapter, which is currently ranked at 26th in the nation. Not bad considering about four years ago the speech half of the team was made up of about 8-12 students who were just willing enough to get somewhat dressed up to get on a bus at three in the morning to compete somewhere near South Bend. Since then though Koenig says that the team has become more balanced between speech and debate. The chapter at Valpo typically has been run by debaters, but Koenig is somewhat a departure from the norm. While she may have competed once in a debate competition, she has primarily only done speech. Often times when one is put in a leadership role with a lot of pressure, it is easy to change. But Koenig is still the same as ever.

When I asked her exactly what her duties entail as president she issues a soft chuckle, flashes her disarming smile and tells me, "I mostly just try to make everyone who is a part of the team feel comfortable with their event, see if anyone needs help, and do whatever it is I get asked to do by the coaches, I guess."

Never one with an ego, Koenig admits she practices and competes just as much as everyone else, and just tries her best to do what she can for the team. Koenig has been participating in Speech and debate since her middle school days at St. Paul's, where she competed in the events that she does does today: Radio, Humorous Interp., and Prose. Much like an avid cross country runner, she has put in countless hours to get to where she is today, even accrediting speech and debate to helping create the person she has become.

"Before I started speech and debate, I wouldn't exactly say I was the most confident person there was, but it has really helped me to step out of my shell," Koenig said.

Recommending that if ever any students feel out of place or unsure of themselves that they join the "big happy family" of the speech and debate team, Koenig acknowledges that while often unmentioned the team is growing every year and being seen more as a competitive entity in the school.

"I think its really cool now that at Valpo people now know who is doing speech and debate, and whats even better is that they respect you for doing it," said Koenig happily.

Having gone to a private middle school entering the microcosm that is Valparaiso High School can be a daunting experience, but Koenig shows her pride in her school in more ways than just leading the team to wins at meets.

"I am glad I came to Valpo, and I love all the opportunities we have here, I’ve been lucky enough to be able to go on the Natural Helpers retreat, participate in the honors art program, and to of course be part of one of the country's leading speech and debate teams," Koenig said.

Winning trophies and ribbons though is not all the team is good for though. Koenig is a firm believer in the idea that this team gives back to its community. Speech and debate is a club that not only impresses schools, but also has room for anyone and everyone who wishes to compete in it as well.

"It really helped me find who I am, and I believe that it can do the same for others too...It is giving the youth of our community a voice, and teaching them how to use it well," Koenig said.

Koenig intends on taking the attitude of giving back with her after high school has ended for her by planning to earn a degree in speech and hearing sciences to become a speech pathologist.

"I want to be able to help people with what has helped me," she said.

Aside from being one of the more talented people I have known, Koenig is also one of the most selfless, always devoting time aside to help out fellow students, teammates and friends.

As our meeting drew to an end Koenig begins to prepare for the Mock Trial read thru (another part of the team). Last year one of Valpo's Mock Trial teams made it to National Competition for the first time, where they competed strongly and and even took home some awards. Koenig of course was part of that team. Devoted, hard working, humble, and giving; Koenig embodies all of the aspects that truly make life matter. Being a friend to hers for a number of years now, I can easily reflect on all the times that Caroline has gone out of her way to help myself or others, not because she had to, or felt obligated, but because she just could. Once a a bit of a self-proclaimed introvert, Koenig actively demonstrates the power of speaking up, and the difference that it will make in your own life, and the lives of others.