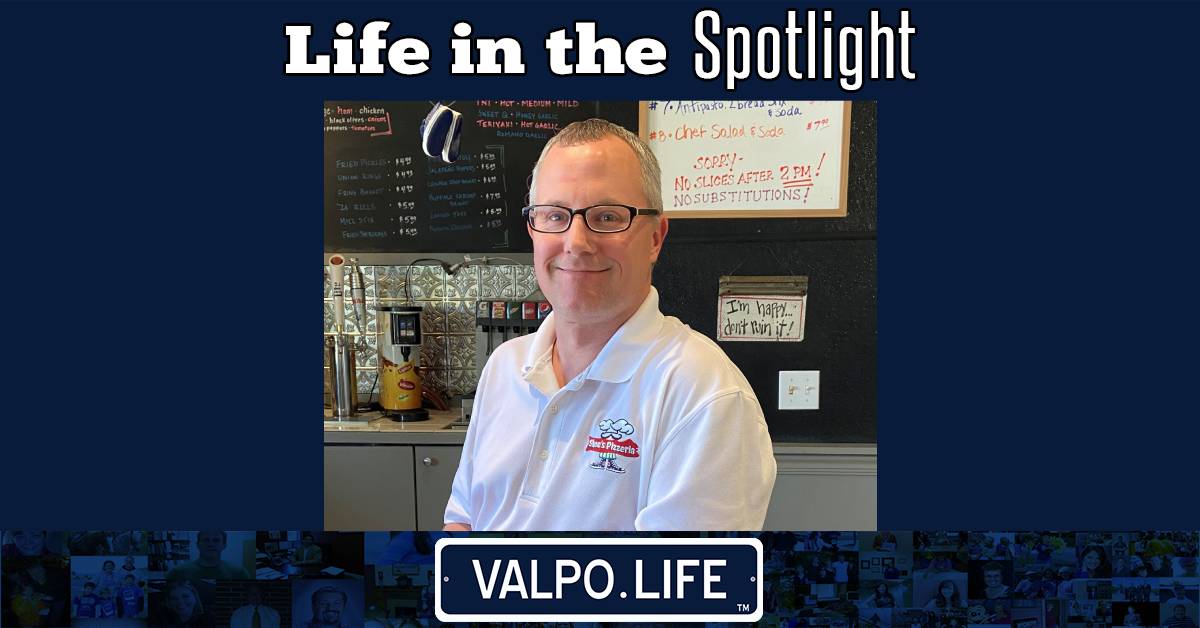 When Chris Shoemaker still lived in upstate New York where he was born and raised, he worked in a pizzeria during his college years. The pizzas were all hand tossed in the very style we envision when picturing a mouthwatering slice of New York-style pizza. The customers were friendly regulars and hungry newcomers who weren’t disappointed when they left.

“I kind of fell in love with the industry,” Shoemaker said. “I always had a dream about opening my own pizzeria.”

Flash forward to today, Shoemaker owns and operates a beloved pizzeria in a tight-knit, bustling community. The parlor has seen everything from familiar faces to out-of-towners finding a new favorite spot, from 80th birthday parties to high school football teams celebrating victories. Shoe’s Pizzeria has become a Valparaiso staple since opening its doors in 2010.

“We thought Shoe’s was a great fit for Valparaiso,” Shoemaker said. “We figured the hand tossed pizza would be a nice alternative to the popular Chicago deep dish pizza in the area.”

The hunch paid off. Valparaiso’s proximity to Chicago was actually one of the draws when Shoemaker and his wife Trina decided to relocate to Valparaiso in 1994. Trina’s mother-in-law lived in the area, allowing them to visit over the years, making the decision to move here an appealing one.

“I would say it’s similar to where we grew up, really,” Shoemaker said. “It’s a smaller community, and we liked the idea of living here but being close to Chicago, just a short car ride away. We’re big fans of professional sports, so we drive up to see games as often as we can.”

Before creating Shoe’s Pizzeria, Shoemaker worked as a mortgage banker. He and Trina became more attracted to the idea of opening up a pizzeria in Valparaiso, and eventually they followed their dream.

“We decided to take a plunge, and it was really good for us,” Shoemaker said. “We’ve been happy ever since.”

“I really like the interaction we have with our customers. At Shoe’s, we have our own way of doing things and we’ve catered a really personal environment,” Shoemaker said.

“Owning my own business has been great, because we’ve been able to customize our own menu, schedule, and feel, without having to worry about a larger franchise or corporate structure.”

Over the years the casual, family-friendly atmosphere at Shoe’s has been the scene of many warm gatherings and happy occasions. One of the surprising delights Shoemaker discovered in owning his business was watching his own family evolve over the years. His two sons, Adam and Jack, both worked in Shoe’s alongside him and Trina.

“Seeing my kids grow up in the restaurant, to start to become the young men they are today, it was really special,” he said. “Adam was 14 at the time we opened, and Jack was 11. Oftentimes it was just the four of us working together, and that experience really brought our family closer.”

Jack Shoemaker is a junior at Indiana University Bloomington, and still works in the restaurant when he comes home for breaks. Adam Shoemaker was so influenced by his time in the restaurant that he pursued a career in the industry himself. He attended the Culinary Institute of America in New York, and became a chef and a sommelier. After working in New York City and then Chicago, Adam took another cue from his dad and pursued opening his own restaurant in Valparaiso. With his family’s help, Adam opened Scarpe last summer.

Located right off of Lincolnway in downtown Valpo, Scarpe offers authentic Italian cuisine and a fine dining experience to patrons. Executive Chef (and Adam's girlfriend) Olivia Fissé is the one behind the menu and food at Scarpe, and with her expertise, the menu is stocked with unique dishes composed of freshly prepared pastas, breads, meats, and their signature homemade cheeses. Plus, the wine and beer selection is excellent thanks to Adam's direction. The venture has been a successful one, and a fun, new one for the whole family.

“We were looking at giving people an experience when they come to Scarpe,” Shoemaker said. “It’s been a great fit for Valparaiso.”

While Scarpe is the elegant cousin to Shoe’s no-frills eatery, the restaurants have a handful of similarities that ensure their success: 1) Both offer delicious meals, 2) both are in the hands of the capable Shoemakers, and 3) both are lifted up by Valparaiso’s active dining community, patrons, and restaurant owners alike.

Shoemaker said one of the special things about Valpo is how supportive business owners are of each other. Especially now, during the COVID-19 pandemic, restaurants are checking in on each other.

“All the restaurant owners here in Valpo have rallied together to make sure we’re all getting through this,” Shoemaker said. “For instance, the Downtown Dining Group, which we’re now a part of with Scarpe. Throughout the year, we come together to work on marketing campaigns for downtown events and events in the parks, and we’re doing the same for this [pandemic].”

The Valpo community has also banded together to support their local eateries. Scarpe is offering special takeaway meals, such as takeaway picnics, and Shoe’s is offering curbside pick-up and carryout orders.

“We’ve been thankful for the community rallying behind restaurants in Valpo. It’s been a great thing to see,” Shoemaker said. “And it’s been great to see the community support us and help us become the established restaurant we are today.”

Shoe’s Pizzeria’s 10-year anniversary is on May 27. Shoemaker plans to host an anniversary bash, complete with special offers and a ceremonial ribbon-cutting from the Valparaiso Chamber of Commerce.

“We’re really excited to make it to 10 years and give something back to the customers that day,” Shoemaker said. “It’s been a lot of hard work, and every year we’re thankful to keep going. A lot of restaurants don’t make it to 10years. It feels great to make that milestone, and we’re thankful to our community for supporting us and helping us get there.”