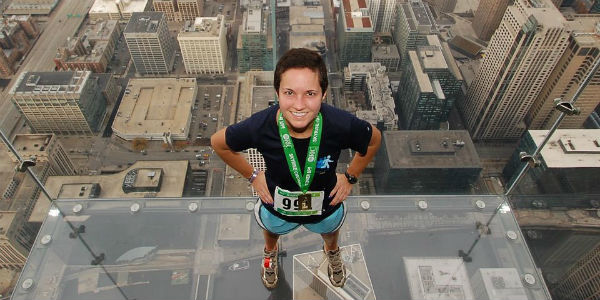 Brooks was born and raised in Kouts, IN. She attended Kouts School from kindergarten through her senior year. An active student, Brooks played volleyball during her high school years and during college at Purdue West Layette she was part of the Shoemaker Co-op, which is like a sorority minus the Greek aspect. Brooks majored in interpersonal communications. After she graduated, Brooks came back to Valpo and worked at First National Bank in the trust department. But there was something missing from Brooks’ life. She wanted to do more.

“I had a desire to see the world,” Brooks said.

So Brooks joined the Peace Corps. For two years she worked in Zambia, a country in Southern Africa as a fish farmer. She helped the natives learn a more efficient way of fishing. She also spent a lot of time visiting with her neighbors and playing with the children of the village where she lived.

She came back to the states afterward and in March of 2009 she obtained a position at Opportunity Enterprises as a QDDP in the Supported Living Department. She worked there until February of 2011, and then went back into the Peace Corps. This time she went to a different country in South Africa called Malawi. There she served as a community health volunteer at a local health care center, participated in medicinal gardening (which she said she loved), and continued to be a fish farmer.

“I learned patience when I was there,” Brooks said. “I could sit in my house for hours now and be completely content. In South Africa things move much slower. You wait for people, cars, development; it’s their value system. Their focus is on spending time with family, not the hustle and bustle.”

When her second stint in Africa was over, Brooks came back to the US and back to OE and this time she became a manager for the Respite Program in July of 2012.

“I love it,” she said. “It’s such a great program because we get to see the results. Our job is providing relief for the primary caregiver. Our program is different than others because clients are brought to us. Parents like that because we’re not in their homes and they still have their privacy. And I love the clients. If you’re having a bad day and your frustrated, go hang out with them and they’ll put a smile on your face.”

Brooks currently resides in Valpo and she is very happy with her location.

“I like that there is a big emphasis on fitness in the community. It’s evident in the parks and the locals which are accessible to everyone. I can say I work at OE with pride and people know who we are and they are very grateful for what we do,” Brooks said.

In her free time, Brooks loves to exercise. Mainly running and Insanity workouts are at the top of her list. When she isn’t breaking a sweat, she’s breaking open the books to read. In the future she’d like to go back overseas and work with organizations that serve special needs individuals in other parts of the world.

Any advice for those looking to make great things happen in their life?

So here’s to the woman who spreads her kindness far and wide. Here’s to you, Christi Brooks. You are a Valpo Life in the Spotlight.