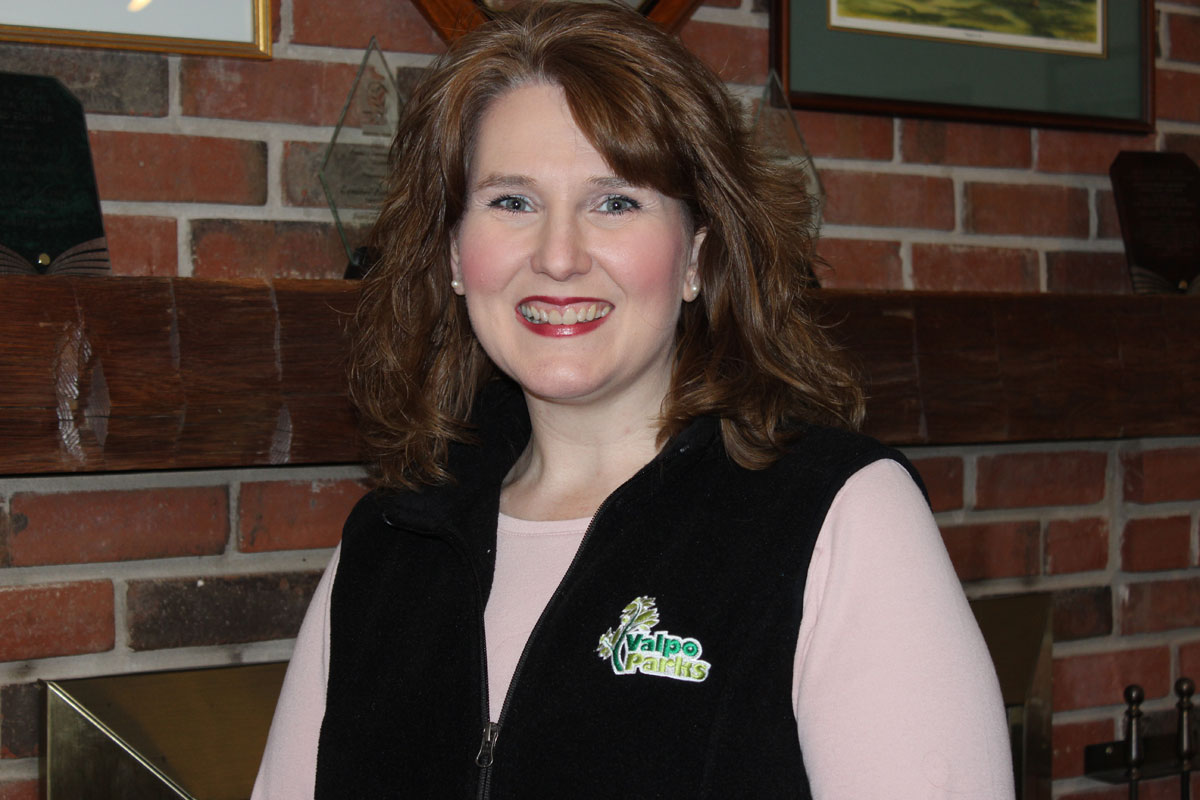 The phone rings at the Valpo parks Department. The voice that answers is the familiar, happy, and excited voice you hear each time you phone the department. It is the same voice who answers questions about youth sport registration while shopping at Target. And, it is the same voice laughing and congratulating her fellow racers after another 5k race.

This is Helene Pierce’s familiar voice – the “Voice of Valpo Parks.”

“I love saying I work for Valpo Parks!” Pierce said. ‘I usually lead with that!”

Pierce is a born and raised Valparaiso native who found her calling for helping others at the customer service office of the Valparaiso Department of Parks and Recreation nearly 20 years ago.

“I knew I would be good at it and I liked the idea of doing something in the community, with the community,” she said. “Once I started, that was it. I knew this was what I would be doing forever. Immediately there was a connection and a feeling.”

Pierce said she is one of those people who enjoys going to work everyday. For the last 19 years she was the person on the phone and one of the first faces you saw when you walked into the office. She organizes several events through the department, such as the Valpo Night Ride, Touch-a-Truck, and the Valpo Luminary Walk. In October, she moved positions and is now the Executive assistant to Director John Seibert. Even with 19 years experience, the new job is teaching her new things, as she works to keep the many, many pieces of the department continuously moving together smoothly.

“We are never bored! We, John and I, joke about that all the time. He asks, ‘Are you bored?’ ‘No I am not bored!’” she laughed. “There is always something going on, someone to connect with, to meet with John, someone who has questions… we definitely are not bored.”

Next to Seibert, Pierce is right in the middle of the upgrades and future projects taking over the City of Valpo, as well as, juggling all youth sports registration dates, fees, and schedules in her head.

At the grocery store, community members approach her with questions about the Parks’ activities and programs. She immersed herself in her son’s involvement with the Park’s sports – coaching and running the snacks and fees – until recently his 12-year-old self realized he does not want his mother as a coach. And, she continues to walk to her and her son’s favorite playgrounds Banta and Kirchoff.

“I love being the person who has all the info,” she said. “I am happy to help. I think I am a little noisy because I like being a part of all this.”

Pierce involves herself in her son’s PTA at school, his Boy Scouts Troop, and sits on several city and county planning boards. In whatever position, she considers herself the connector, always making sure the pieces of the event are moving together properly.

Her love for the parks and the pathways inspired her to start moving herself, toward a goal she has never made before. In 2015, she ran her first 5k race and kept up the training to run a few more in 2016. This year her goal is to run five 5k races throughout the Northwest Indiana region, looking for fun, charity-driven events to participate in.

She has her eyes on the Turkey Trot and a few others this year, and trains throughout the Valpo pathways and at the Valpo YMCA.

When it comes to living in Valpo, Pierce said she never thought about another possibility. Her family eats in Valpo, shops in Valpo, walks downtown, and enjoys the amenities like the movie theater.

“I have never even thought about leaving,” she said, believing this desire to bring her city’s community members out to events is something that has been engraved in her heart since she was young.

When she looks out her window from her park department office, she sees the kids playing on the Foundation Meadows Park. Their laughing voices drift through the building and that familiar feeling of happiness, that knowing her work in the office, even if behind a desk, helped create that fun.

Familiar: That’s how the community views her. She is the voice of the Valpo Parks Department, that familiar voice that says, “Hello, This is Valpo Parks.”

To learn more about the Parks Department click here.