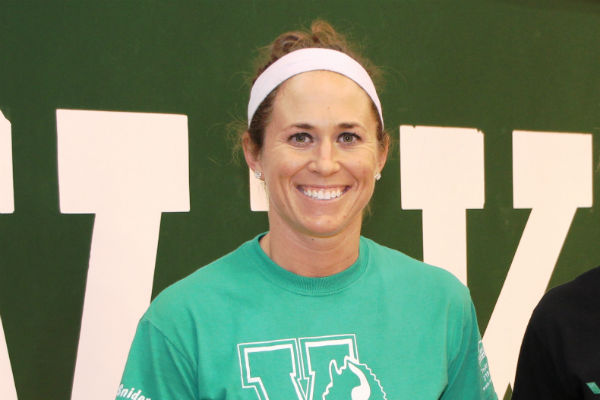 Have you ever met someone who had the energy and the compassionate nature of ten people? I have. Her name is Jeanette Gray. She is this weeks Valpo Life in the Spotlight.

Gray was born and raised in Valparaiso. She attended Valparaiso Schools from kindergarten through her senior year of high school. She was a very smart and active student, excelling in math and playing lots of sports such as basketball, volleyball, softball and golf.

Valparaiso University snatched Gray up and she got her bachelor’s in Mechanical Engineering (wow!) there. After her bachelor’s degree, Gray went on to obtain two master’s degrees. One was in education and it came from VU. The other was her MBA and Gray got that at Ball State. While in college, Gray played basketball and helped the VU women’s basketball team make history. During her junior year the team made their first pro season tournament appearance in the college’s history. It was the Elite Eight of WNIT. As a senior, Gray was able to experience the NCAA Tournament with her team –also fro the first time in the colleges history.

Before graduating, Gray landed her first coaching job at Ball State coaching the women’s team. After three years, she moved back to Northwest Indiana and coached the girls’ varsity basketball team and taught math at Hammond Clark High School. Then another stint of coaching girls’ basketball and teaching all types of math at Highland High School. Finally, Gray made her way back to Valpo and became the girls’ varsity coach as well as a math teacher. She has remained there ever since.

So I’ve noticed a common thing pop up in Gray’s life. Do you notice it? It’s basketball. This woman loves it. This makes sense because her family is very into sports.

“I was in the VHS girls’ locker room when I was two,” Gray said. “I lived and died girls’ basketball. I wanted to be a Lady Viking. The competition, the winning; I love it. I love to put on the green and white.”

Outside of teaching and coaching, Gray likes to spend time with her family and play football. Yep! Football. Gray is a wide receiver for the Chicago Force! How awesome is that?

She has been with the team for nearly four years and she loves every minute of it, or as she puts it, “It’s nothing short of amazing!”

Gray is very involved with the community. Every year she and her team volunteer with Hilltop House of Valparaiso, and this coming January they will be collection donations for the American Cancer Society.

Seeing as how this woman is a machine and she has done so many wonderful things with her life in such a short amount of time, I asked her if there was any advice she had for people looking to follow in her footsteps.

“Try something that you are passionate about that you wake up loving to do every,” Gray said. “And give back to people who can’t give to you. This is one of the best lessons my mother taught me.”