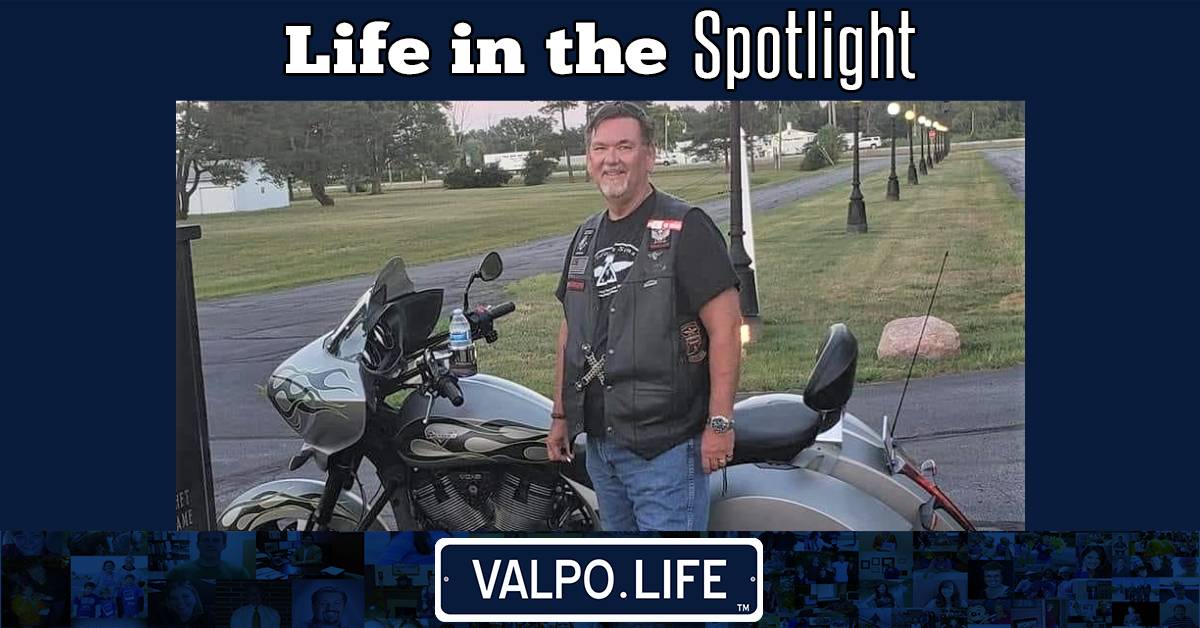 Jerry Hootnick opened his eyes one morning at the end of April, and it took nearly all the energy he had to put his feet on the floor, stand up, and walk to the living room. Bleary-eyed and acutely ill, he gazed outside at the street lining his Salt Creek home in Valparaiso, trying to make sense of all the noise. Along the road, a couple dozen motorcycles  - he can’t remember how many exactly - revved their engines as bikers with the Widow’s Sons Masonic Riders Association lined the street in solidarity for their fellow rider who was quarantined inside, now in tears.

It was the moment Jerry Hootnick knew he would survive Covid-19.

Hootnick isn’t the kind of guy to ask for help, but his people showed up for him when he did. From the moment he first registered a 101.4 temp, an outpouring of friends, fellow riders, and one angel, in particular, helped him through what he calls the scariest illness of his life.

“I really thought I was going to die,” he said. “I’ve already dealt with the whole mortality issue - 30 years working in a prison, for one. But then I was diagnosed with afib and it was like – oh, look, your body can betray you. But I have to say – I’ve never felt anything like this virus. Ever.”

Atrial fibrillation is a heart condition that causes an irregular heartbeat and can lead to an enlarged heart and other deadly symptoms if not treated. Hootnick was so sick with coronavirus at one point that he couldn’t remember to take his medicine.

But what really prompted him to ask for help is when he tried to take his dog Sophie outside and nearly passed out, and when he couldn’t summon the energy to care for his cat, either.

“He texted me and asked me if I would come and scoop the cat’s litter box. He and I worked together at the prison (Westville Correctional Center). After I met him, I found out he was a Marine also. I did 9 ½ years in the Marine Corps and when you’re a Marine, you’re automatically family,” Simmons said.

“I had a few reservations about it because I have four children. I have fibromyalgia and other things, and a 71-year-old mother with COPD, but I knew if I took precautions, I would be relatively safe. Plus, I’m the kind of person who will give you the shirt off my back and the last dollar in my wallet if you need it,” Simmons said.

For a little over a week, she suited up three times a day in personal protective equipment and visited Hootnick’s home to ensure he was taking his medication, and that he had fluids and food nearby. She also took care of the animals.

“She’s like a daughter to me. I get choked up when I think about it,” Hootnick admitted.

“My dad lives in Texas so I don’t get to see him all the time,” Simmons said, “and Jerry took on a fatherly role to me early on. It feels like I have a surrogate dad,” she said. You could hear the smile in her voice.

When Hootnick first noticed he wasn’t feeling well in mid-April he didn’t pay much attention for various reasons.

“I was working 12-hour shifts at work because of the staff shortage, and I was fatigued. My appetite was starting to fall off a little, and one morning after work I got dry heaves. I kind of dismissed it, thinking maybe it’s just because my body wasn’t adjusting to the new shifts well. Plus, I had eaten a mess of yogurt covered raisins,” he said.

Then, the body aches settled in.

“I really felt it between my shoulder blades, and in my knees and ankles. I had terrible body aches, and that’s when I first registered a fever,” he said.

Immediately, he notified his workplace and went to a local testing site.

“I had no idea you could put that much Q-tip into your nose,” he laughed. “It’s very unpleasant. It made my eyes water.”

In took about four days to get the results and in that time, he was instructed to quarantine at home. He had a telehealth visit with a doctor to help manage his initial symptoms but got progressively worse, quickly.

“He looked really bad,” Simmons said. “I tried to convince him to go to the emergency room but he wouldn’t. So I just took care of him at home.”

Hootnick said he was definitely scared but didn’t want to go to the hospital.

“I kept telling myself – I’ve seen the statistics. About 99.8 percent of people survive. I’m going to be one of them,” he recalled.

The fatigue got worse every day, sinus headaches came in heavy waves, and the chills were uncontrollable. After about a week, the coughing started.

“I had shortness of breath where just walking to the bathroom was all I could do. Beth told me she could hear me wheezing from across the room,” he said. “I never had that feeling that something was sitting on my chest, but my lungs just wouldn’t inflate enough to let me take a full breath. I probably should have listened and gone to the hospital at that point,” he admitted in retrospect. “But I didn’t want to be on a ventilator. It seemed nothing good would come of that.”

Hootnick said it would have been a blessing to lose his sense of taste like many coronavirus victims do.

“I could taste but everything was disgusting. My sense of taste was altered. In 10 days I think I had one blueberry muffin and a couple things of yogurt.”

He lost 12 pounds by the time it was over.

“I can’t remember when exactly, but I remember the first day I started to feel better. The recovery from Covid is an absolutely amazing feeling. It’s just pure joy. I remember thinking – I beat it. I’m getting better. It’s going to be OK.”

Hootnick was monitored closely by the telehealth physicians and the county health department. The criteria to return to work is to have no fever over 100 for three days, and improvement of all symptoms. His breathing was still compromised even after being fever free for several days, so he took a little more time off.

“They have me working in a control room now so the job is not as physical, which is good because breathing is still a problem,” he said.

Hootnick was overjoyed to have been able to mow his own lawn recently and get back out on his motorcycle. An avid musician, he’s found the energy to pick up his bass and his guitar, and fiddle around on the drums again at home, and has plans to learn the slide guitar, too.

Hootnick decided to share his story because he feels obligated to help educate people.

“I know a lot of people are curious about what this virus feels like, and I’m here to tell you – it’s no joke. I was totaled. I hope people will take it seriously and take the proper precautions to protect themselves and others,” he said.

More than anything, though, he feels the need to thank his people.

“People really rallied behind me. My friends, Beth – they called and texted and took care of me. They brought oodles of food. My brother called me every day,” he said, his voice cracking. “My neighbors mowed my lawn a bunch of times. And I can’t say enough good things about the Masons. They were there for me.”

“You know I just kind of took the whole thing on the chin, and I kept rolling. I’m waiting for the world to open back up. I don’t have a lot of quitter in me, there’s not much of that in my spirit. I fought through Covid. I’m mission ready,” he said.