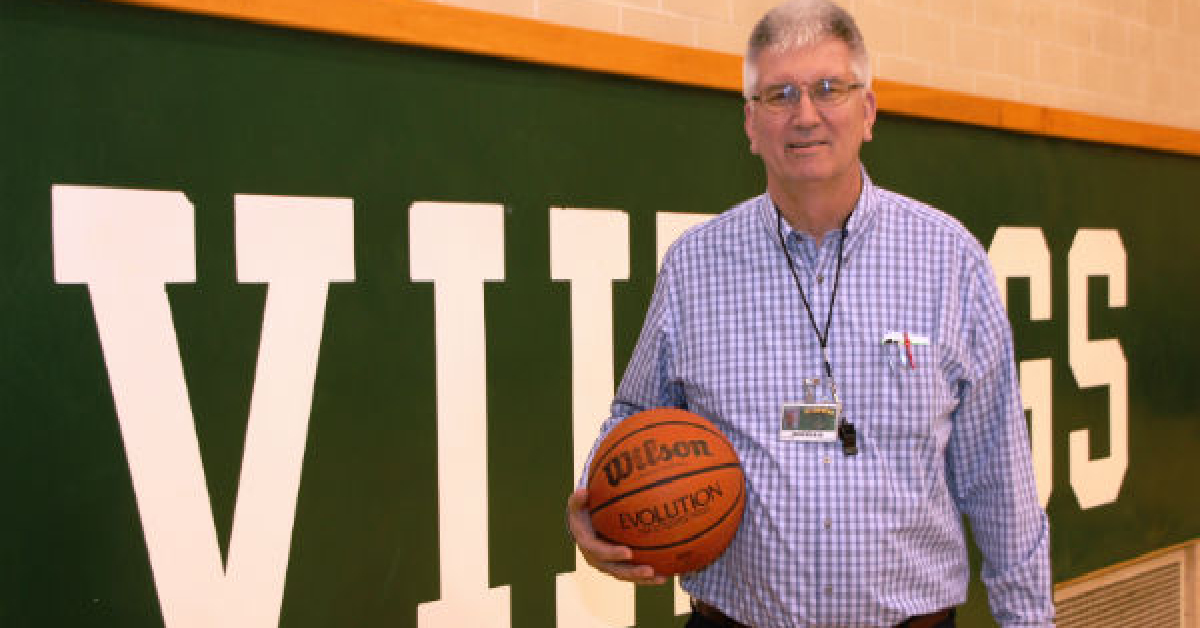 Joe Otis is a Valparaiso High School icon. Whether in the classroom, on the basketball court, or just in passing through the hallways, Otis seems to impact the lives of all who interact with him.

I first met Otis my freshman year. I had him second hour as my world history teacher. I quickly came to realize that the tall man with the black, thick-rimmed glasses standing at the front of the class room and spitting out historical facts like water at the splash pad at the Central Park Plaza would soon become a man who have I admired as an educator for all of my time at the high school. I was fortunate enough to be able to land this week’s Valpo Life in the Spotlight gig with Mr. Otis. We met in his classroom after school to discuss his recent move to the head coaching position of the varsity girls’ basketball team, teaching, and life in general.

Born the eldest of three sons to a Hungarian Immigrant, Otis has been a teacher and coach at La Porte High School as well as Valparaiso High School. He is also a husband and father as well. Otis received his undergraduate degree at Northwestern University and his Masters at Valparaiso University. Each day, he arrives at school at about seven o'clock in the morning where he will read his paper(s) and brush up on current events to discuss with his classes.

"I always like to introduce the day's history lesson with something fairly recent, and to try to make it relevant to what we're studying," Otis said.

His unique style of teaching is well known throughout the school, and anytime a student mentions his name the conversation immediately swings to what he read in the papers that day. As a former student I always found myself enjoying his reads through a conglomeration of news sources to broaden his students’ world view and to form a palpable link from our world to the past.

"I have one world history class, current events, and three foreign policy classes in addition to a study hall. My day keeps me pretty busy, and by the time that its all done I'm already preparing the next days lesson or working on girl's basketball," he said.

Yet, Otis's labors do not exclusively pertain to the classroom. His hard work is witnessed in many areas, particularly near the bench on the basketball court. With over twenty-one years of head coaching experience, anyone who has been to Valparaiso High School Boys basketball game can tell you Otis never seems bored with what is happening on the court.

Coaching through good times and bad, Otis’s passion for the game and the teams which he coaches never wanes. When asked about his move from coaching Varsity Boys at La Porte to Valpo, and now to Valpo's Varsity Girls team, Otis said that it has been many things.

"Everybody dreams of coaching at their old high school, but because of a long succession of coaches that just didn't seem to be in the cards for me," Otis said.

Until four years ago when the job for Head Coach was reopened and Otis leapt at the chance to return to the Viking Nation. Otis calls the move "A dream come true". Upon his return home Otis was reunited with former team-mate and the principal at the time Mr. James Doane.

Otis said, "It's been great. I love being back here and I look forward to coming to school."

Yet, Otis says it never really occurred to him to become the girls coach until the job opened up last year even though he had coached the La Porte girls for the last five years before coming to Valpo.

"I had fun doing it before, and I'm sure I'll have fun doing it again. I'm looking forward to the challenge," Otis said.

Being a native of the "Vale of Paradise", Otis has a few things to say when it comes to his favorite things about Valparaiso.

"Growing up here, there were so many people who did things for me out of the goodness of their hearts just because. It’s just a great place to grow up. I always had great teachers at Valparaiso High School, teachers who made it possible for me to go to a college like Northwestern University, and I hope that I have some of the qualities of those people," Otis said humbly, his brows furrowed in thought and recollection.

Otis's fond memories of the service others have given him throughout his life have rubbed off upon his own actions as well. Otis's thoughts on serving one's community are strong.

Before becoming a teacher and coach at La Porte High School in 1980, Otis was an assistant coach at Valparaiso University and was in Kiwanis. Otis says that when you are in such a type of club you gain a sense of how important such service projects are to the community you live in, and how necessary it is to give back to the community. He says it has always been something he has enjoyed, as well as living in such a vibrant community.

"I feel the University has a lot to do with that too, I feel that it is just one of the many things that makes a place like Valparaiso so special," Otis said.

Yet preceding his desire to educate and coach, Otis went to Valparaiso University with the intention to become a lawyer. The summer after his freshman year at Northwestern, Otis worked as a park director for the Valpo Parks Department when they had open playgrounds and summer programs at Tower Park. He said that everyday at lunch Jack Campbell, the current baseball and girl's basketball coach at Chesterton would have lunch with him while he worked at the nearby railroads.

Otis said, "He was the one who said I should get a teaching certificate on the side of the law degree, and that I would make a good teacher."

Otis said he had never really thought about the career path of education then. While he did say that he enjoyed working with the kids

"Making pot-holders is one thing, compared to what I'm doing now though," Otis chuckled. "But it's funny now because afterword I looked into what it would take me to do that, and how. And I wonder if we would even be having this conversation if I hadn't."

Luckily for Valparaiso and La Porte student that he did though. While the irony is that one of his children is now a lawyer in La Porte.

Overall though, Otis says the favorite parts of his job are the students and athletes.

Now at 61, Otis is one of the oldest teachers at the school and says that, "They keep me young. In fact, if you love it and work at it, being around kids will keep you young forever."

When it is all said and done Otis said, "I have no regrets."

Saying he has no doubts now that the boys team will be in capable hands and that he intends on coaching the girls for at least five years.

It can easily be said that there won’t be anyone clamoring for Otis to decide to retire earlier than those five years. Over the four years that I have had the privilege of knowing him, Mr. Otis has been one of the most open minded, hard working role models for myself and other students alike at the high school. I am a verbose person, but to describe Joe Otis in his entirety would be far too difficult. In essence he is a "good guy" by every means; a "good guy" who I am lucky to have known.