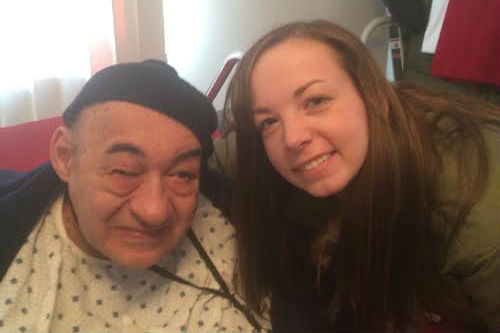 Though a tragedy can change your life forever, it’s how you handle the situation and cope with that change that defines you as a person and shows true strength. John Tomczak, a Valparaiso resident, continues to cope with the challenges of enduring a severe injury in Vietnam, while never losing his kind heart and humorous spirit.

Born and raised in Valparaiso, Tomczak attended school and was involved in Eagle Scouts. He later went on to Purdue University as an Engineer major, where he would leave to begin his journey in the Army.

“I was 20 and in my third year at Purdue when I volunteered for the draft,” Tomczak said. He served as Private First Class.

John ended up in the Central Islands of Vietnam where he stayed for 6 weeks before an ambush left him in critical condition. John sustained a shot to the head by a sniper, and many believed he would not make it. To this day, he continues to prove them wrong.

“That was my longest day, before I came home. I was in the hospital for 17 months and one day. People would talk about how they would be there for 3 weeks because they had a leg injury and I would think, ‘ And you think that’s a long time?’ Tomczak said.

John was given last rites “mucho times,” and his mother sat by his bedside and continued to talk to him. She just knew he was going to come out of it. “She put her hand in my hand and said, ‘John, if you can hear me, squeeze my hand,’ and she told me I squeezed her hand until it was blue,” Tomczak said.

Recovery was of course tough, and John went through 16 brain surgeries. The injury left him with speech problems and seizures, among many physical disabilities. Through these obstacles, John was still able to keep a light tone and make others laugh.

“During one of the many times I was in the VA hospitals, the guy in the bed next to me was a sniper for our side, so I introduced myself saying ‘You’re a sniper, and I’m a snipee.’ You’ve got to have a sense of humor about it, its either that or cry,” Tomczak said.

John wasted no time getting back to doing the things that he wanted to do, and that meant getting his degree.

“As soon as I came home, I tried right away to pick up my studies.” John got a degree in Psychology at Valparaiso University in 1974. “I met some nice people there,” Tomczak said. Fellow students would assist him with reading when it became too much for him to do on his own.

Now, John has started talking with kids at the High School and sharing his story. This gives students the opportunity to learn about the war first hand. Though the experience left him changed forever, John takes a lot away from his time in Vietnam.

“I learned so much more about mankind. We’re a strange lot! We think that things like war can really solve problems. Sometimes a group of kids will ask me why I’m in my wheelchair and I try to explain in terms that they’ll understand. War is like playing cops and robbers, but they use real weapons. A little girl, with a sincere look in her face asked me, ‘Why is there war.’ It blew me away! I told her, ‘Why do you argue with your brother?’ Same reason,” Tomczak said.

The community has really been there for John over the years. They helped send his family out to be in the hospital with him, and came together to build the house that John still lives in. The house really caters to his needs.

In return, John really hopes to see the house continue to be used as a legacy for him and be used to help others who would benefit from its capabilities. The house currently houses others who have had a brain injury in the war, and John wants to continue to use his house to serve others.

One of John’s favorite Bible verses is Deuteronomy 14:2, “For you are a people holy to the Lord your God. Out of all the peoples on the face of the earth, the Lord has chosen you to be his treasured possession.” John Tomczak has a strong spirit, a witty personality, and so much to share with others. His story shows how important it is to make the best out of a situation and give back to those around you.