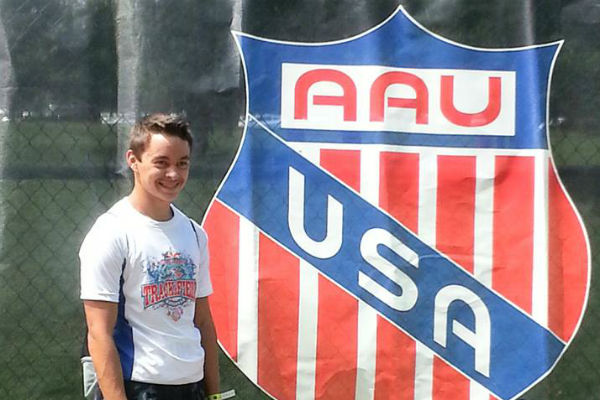 This year, the AAU Junior Olympic Games in Detroit, Michigan had a local star among their ranks. Jordan Counter of Valparaiso, cheered on by his equally athletic family, competed in the 100 meter dash, 200 meter dash and high jump.

As an 8th grade student at Thomas Jefferson Middle School, Counter is currently involved in the honors program in addition to his physical engagement in football and track. Even though he has such a heavy schedule full of schoolwork and body conditioning, he still manages to do well.

“I’ve only had one grade drop down to a C and I told myself I would never let that happen again. Other than that, I’ve gotten either straight A’s or slid into the A and B honor role. My mind and body go through a lot and I’m thankful to have a lot of support at home and at school,” Counter said.

Counter highly recommends other students to enroll in the honors program at Thomas Jefferson Middle School because it will look great on your future transcripts for college. He is hoping to attend Notre Dame or the University of Oregon to continue his football career along with his choice education program.

Counter, his mom, and his three sisters are all wonderfully close and very athletic. All three of his sisters (Zoey, Taylor, and Lexi) are involved in track. In addition, Zoey plays soccer and Lexi enjoys gymnastics. His mother, Diana, runs 5ks and works out at the Valparaiso YMCA with her outstanding children.

“Football is my main sport; I first started with Pop Warner and now I’m on the junior high football team. Track helps me get ready for football and I’m happy to have coaches who push me to do my overall best,” Counter said.

The AAU Junior Olympic competition was first brought to Counter’s attention by his two track coaches at Thomas Jefferson Middle School, Nickerson and Stento. Last year, he began his journey and since then it has been all that more exciting for him.

“This year in the AAU, I was trying to place better than 8th because if you get 9th place or higher, then you don’t place at all. In my school’s track, I’m trying my best to set records. I have a copy of best times next to my door from my track coach and whenever I see them, it makes me want to train harder. It motivates me even more,” Counter said.

“Early last year, I wasn’t very motivated to do much, but after I happened upon some motivational videos by Eric Thomas on youtube that all got turned around. After watching a lot of his videos, I started self-motivating and thinking positive,” Counter said. “Doing those small things for yourself help out so much.”

His mom, Tyson Gay, and Michael Johnson are some of the outstanding individuals Counter looks up to the most in his life.

Counter recommends the Junior Olympics to those in his age group who want to make friends, new people, and gain confidence. If you place or not, you made it there and you tried—that’s all that matters.

Thank yous go out to Coach Kaufman who always motivates Counter to always do better and Mr. Krenz for helping him with his high jump abilities.