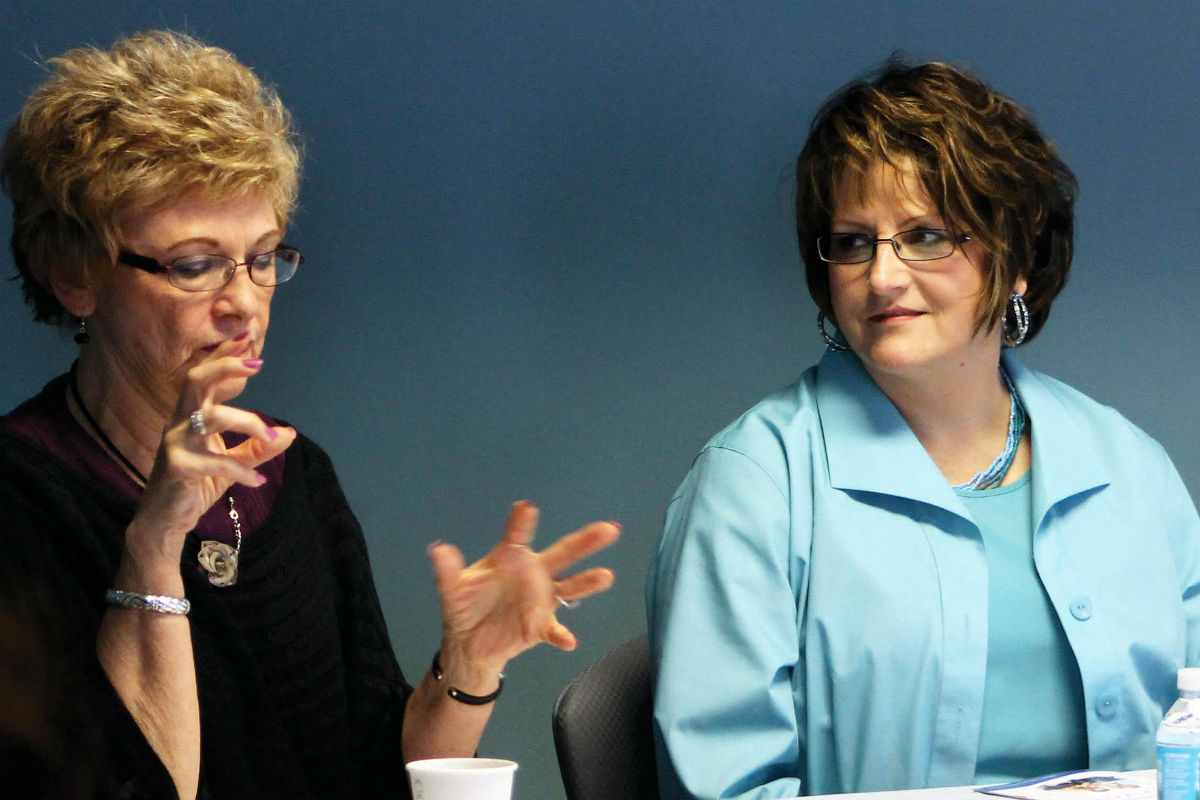 I interviewed Kim Eldridge by phone and while we had a great time talking, I heard occasional noises in the background from her end of the connection. As it turned out, among her many skills Eldridge is a capable multi-tasker who was keeping her hands busy while we talked. As you’ll soon see, Eldridge is not a woman who can slow down. And she likes it that way.

Born and raised in Gary, Eldridge spent a number of years living in East Chicago before settling in Chesterton for the past 13 years. She worked in Chicago much of her life, employed as a makeup artist early on, worked a number of other places, and ended up an event organizer for a major consulting firm before moving her work to Indiana.

“I’ve always been a creative person, and that’s very important to me. No matter what job I did, I made sure it has some creative aspect to it. I need that to be happy,” Eldridge told me.

For 26 years, she commuted by train to these various jobs. That might seem like a lot of travel time—and it is—but in the end it was worth it because that’s where she met her husband, Steve, who is a conductor for the South Shore Line.

While working in Chicago, all the companies she was with were big on giving back to their community. Eldridge learned and appreciated that commitment, so when she shifted to Indiana for work, she looked for positions in which she could be creative while serving others.

“I was with Opportunity Enterprises for four years as an employment consultant. My job was to talk with companies and help them find ways that they could integrate people with disabilities into their companies. I liked being able to help people that way. From there, I moved to North Shore Health Center, where I designed flyers and helped promote events, but also went out into the community with their family care program.” Eldridge said.

Currently, Eldridge is the Northwest region consultant for MDwise. It’s a job that incorporates her love of working with and helping people with her passion for organizing and creating. MDwise is a non-profit healthcare company that assists primarily low-income people and families by offering ACA-approved plans as well as plans for low-income people who don’t qualify for Medicaid or Medicare. They also offer some other health plans and services. Eldridge’s duties involve planning, organizing, and giving presentations and health fairs all over her seven-county territory. Her presentations include topics such as utilizing Medicaid services and understanding the ins and outs of the ACA.

“I started out as an artist, grew as I worked and learned, and now it’s kind of come full-circle; I get to decorate and plan, using what I like in my work along with helping people,”  she said.

As tiring and consuming as her position sounds, it’s not enough to drain this dynamo of a woman. Since 1996, Eldridge has operated her own business, “Kim Eldridge Special Events.” Using her professional experience from before, she’s established this successful event planning company.

“It lets me do the event organizing I like, that feeling of starting something and seeing every part to completion. It also lets me do a lot of artistic stuff, like putting the pieces together to form the event or even making the centerpieces for a wedding by hand,” Eldridge said.

She works with local people for all kinds of events, but says she has also done her job remotely with clients in Wisconsin, Michigan, and even as far as California. The highlight of her career so far was at the end of 2011 when she spent nine days in Washington D.C. decorating the White House for Christmas.

With her daughters Mandy and Stephanie out of the house and living on their own, Eldridge finds her days filled up with work. As an example, she told me that just a day ago she was at the MDwise office from 7AM to 8PM, then came home to do two more hours of work on her own business. By now you may be wondering how she gets that much done. A large part is her drive to work hard for others, but another is that she has suffered from insomnia since a young age. No one particularly wants that for themselves, but living with it as she has been, Eldridge learned to embrace the upside: she has more hours in her day to do what she loves.

When she can find time, Eldridge enjoys drawing, painting, baking fancy desserts (including wedding cakes), and any activity in which she can put something together or create something artsy.

Eldridge is one of the hardworking ones who found a way to combine what she loves and her desire to work with and help others into a fulfilling—if jam-packed—career. What’s her advice to everyone else?

“Don’t worry so much! I’m a funny one to say that because I still do it too, but it really doesn’t help at all.” So if you don’t have the advantage of being able to live with gusto on four hours of sleep, free up some time during the day instead by doing rather than worrying. Using Eldridge as an example, the best way to find the energy to “do” is to do what you love," Eldridge said.

If you’d like to contact Kim about an event, you can email kimeldridge@mac.com or call 219-871-9133. If you’re more interested in her role as MDwise’s consultant, email kim-eldridge@comcast.net or call the same number listed above.

Photo courtesy of The News Dispatch