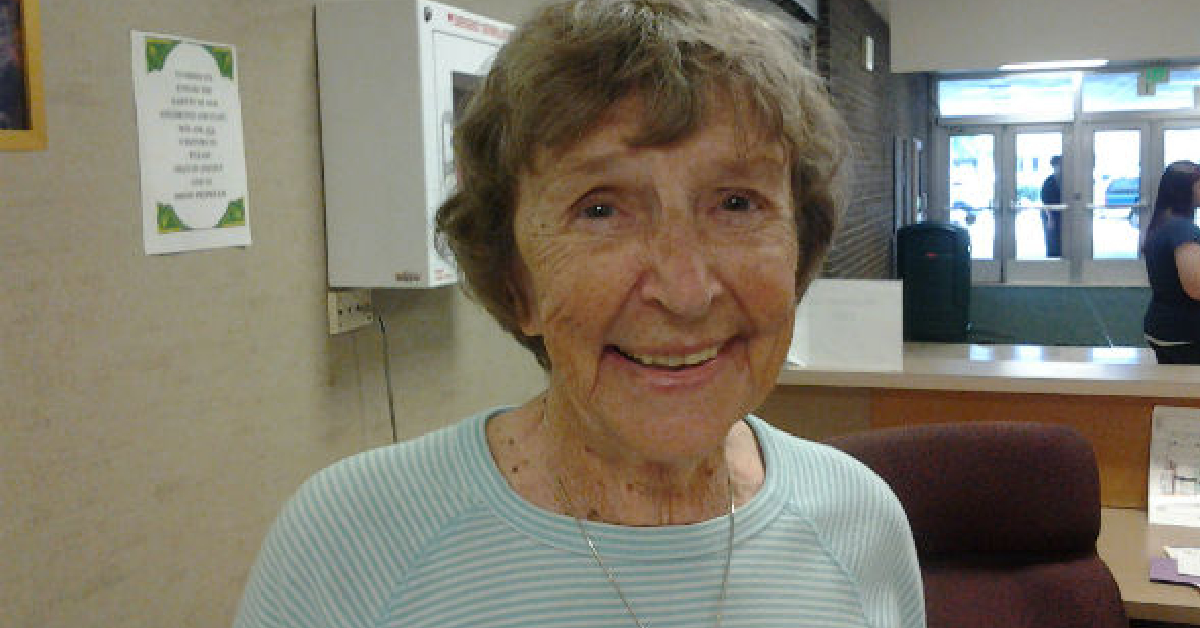 Have you ever met someone that you just instantly like? You know, no words have been spoken yet, but you just get a good feeling when you see the person for the first time. I felt this way about Lorrie Woycik. I sat with her behind the security desk at Valparaiso High School and interviewed her for A Valpo Life in the Spotlight, while students crowded the hallways and faculty walked by and shouted out a friendly greeting here and there. It was fun to watch Woycik interact with colleagues as well as strangers. Her personality has its own gravitational pull, and if you read on, readers, you’ll see why.

Lorrie Woycik was born in North Dakota, and at 19-days-old she was moved to Staten Island, New York where she stayed until she graduated from high school. What brought Woycik to Valparaiso was college. She attended Valparaiso University and received a bachelor’s degree in physical education and elementary education, and went on to receive a Master’s in special education from St. Mary’s. Woycik met her husband, Barney Woycik at VU and became a first grade teacher after graduation.

“When we got married, I got pregnant, and we chose to have me stay home with our children. So I started tutoring little people and that’s kind of how I ended up falling into special education,” Woycik said. “My dad was a minister and I would go with him to what was called Willowbrook State School and I just sort of always have fallen in love with the underdog. I always wanted to do something that helped with somebody that couldn’t always help themselves.”

At that time (roughly the1950s) special needs children weren’t allowed in public schools. A group of parents got fed up with this and decided to create a private school that would allow children with special needs a chance to learn. They called it the Vale Day School, with the name being a nod to the city’s name: Valparaiso. When translated from Spanish, it means, “Vale of Paradise”. Woycik was asked to be the teacher at Vale Day School.

“I truly believe that it was a calling from God because the reason I was suggested by one of the board members of that group was because I was tutoring her first grader in reading,” Woycik said. “When we had a meeting at Mann and Imo Spitler’s home, they had a twelve-year-old Down’s Syndrome daughter, Susan, who had never been to school.  When I walked into their house, she was with her dad at the front door, and he said, ‘Susan, this is Mrs. Woycik. She’s going to be your teacher.’  She went, ‘My teacher...my teacher,' and she sat right next to me all night, and I was hooked.”

While she spoke these words, Woycik reached out her hands and touched my face and stroked my arms to emulate Susan’s reaction from so long ago.

Vale Day School stayed open for 14 years, and when the public school system went through some changes and it was decided that everyone deserves an education, Vale Day School was incorporated into the education system. When Special Olympics began in 1969, Woycik found a new calling. She became an Area Director, then decided that she wanted to only concentrate on Porter County and became Porter County Coordinator. She also coached basketball, volleyball and swimming for the Special Olympics. In 2011, Woycik stepped down from the position and became the co-coordinator.

Woycik and her husband have lived in the same house in Valparaiso since they bought it when they got married. All three of their children were raised there and though they had planned to buy a bigger house, Woycik and her husband decided to build on a family room instead because they loved their home and the town so much.

“Way back then, and that’s like 50 plus years ago, Valpo was so small. Coming from New York, I loved it. I just thought it was so wonderful to have this small, caring community. Even though Valpo has grown by leaps and bounds I still believe that it is basically a caring community,” Woycik said.

What other endeavors has Woycik sought? She has been involved with Opportunity Enterprises since it opened.

“All of a sudden, some of our kids in the Vale Day School were getting to be in their twenties and it’s like, ‘Now What?’ We can’t just send them home and say, ‘So long. It’s nice to see you,’” Woycik said. “Again a group got together to start a workshop so that as they became adults they had another place to go. Of course, that has blossomed and blossomed. When we had the campaign for Opportunity Enterprises years ago, Harley Snyder and I were the co-campaign chair. We thought that OE out on Evans going to be big enough for multi-million years. In less time than you can snap your fingers, it was too small.”

Woycik is also involved with the Porter County Substance Abuse Council, her church, Kiwanis, and she volunteers as the security desk attendant at VHS. That is something notable to mention: The only time Woycik accepted monetary compensation was when she was a teacher. All other jobs have been volunteer-based. In her free time Woycik enjoys reading, skiing with her husband and writing. A future goal for her is to write a book. Personally, this writer thinks that is a splendid idea. All those experiences and knowledge need to be shared. Speaking of share, here is a bit of advice that Woycik would like to pass.

See now? See why I like this woman? At the end of the interview she hugged me, even though we barely knew each other. I hope that people like Lorrie Woycik come into your lives, readers. Better yet, follow her example and brighten the life of another.

To find out more about the Special Olympics click here!!

To find out more about Opportunity Enterprises click here!!