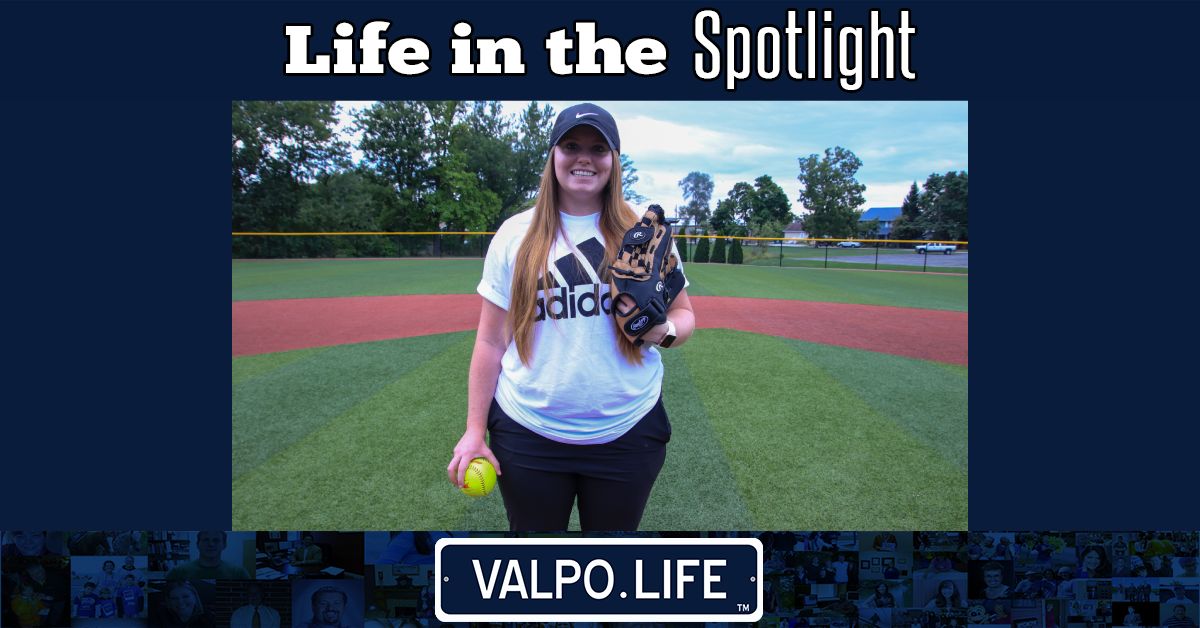 Sports have an easy way of bringing people together, especially the younger generations. With youth sports, it’s not uncommon for kids to be smiling like angels when they hit their first baseball off a tee, or when their small figures lob up a basketball, making it after all the efforts of their tiny might. For a certain woman in The Region, these joyful experiences that surely invite unity into the community have always been a top priority, and that woman would be Madison Bell, youth sports director of the Valpo Parks Department.

In high school, Bell herself was a baller. She valiantly volleyed on the volleyball team, and dominantly dribbled her way down the court each time she suited up for a basketball game. Playing sports was commonplace throughout her four years, and it’s something that has weaved its way into her adult life.

Bell is from Hebron and was educated both at Ball State University (BSU) and Purdue University Northwest (PNW); it’s clear that she’s been making the rounds in Indiana for quite some time.

Before doing what she now does, Bell had a few teaching stints, and at one time, taught in Merrillville. For the past five years, she’s taken on her current position with the Parks, loving every second of it.

While she’s seemingly always been one to excel at perfecting her individual game, in Bell’s heart, there’s no sort of shortage when it comes to sharing the love she possesses for all kinds of sports. It’s brought her smiles, and that’s something that she now seems to want to bring to children.

“I've always had a passion to work with kids. I got an elementary education degree, but I started with customer service as a job in college, and everything just kind of progressed from there. I worked a little bit at the ice rink, as a manager, but I left for a year to go teach once I got my degree. However, I felt like my home has always been here, with the Parks,” she said. “So, when this position became available, I felt like it was a great opportunity to continue working with kids, but also an opportunity to follow my passion, to get kids active. Growing up, I was a big sports person, so it was definitely a way to combine two of my passions together and still be a part of the community. Every job I've had has been a great experience; they’ve been like steppingstones that have led me to this position.”

Every time one selflessly commits to something in a similar manner that Bell has, that person is bound to feel gratified with their vocation. They’re eager to make it to the workplace in order to make the difference that they desire — Bell’s no exception.

“My job’s 100% one of the most fulfilling things I think I could do. Watching kids play a sport for the first time, you can really see how that special spark clicks, that they're starting to get it. With something like Challenger Baseball, when we're out there and a kid learns how to catch the ball for the first time, you're watching them and their parents, all the excitement that everyone’s feeling, and it’s fun. Offering a program like that provides fulfillment to the kids, as well as myself. There's no better feeling. You’re watching kids as they try to figure out where they are, what their place is,” she said. “Being able to offer a wide range of sports — soccer, baseball, flag football, lacrosse, all the little camps or clinics — is crucial when it comes to the kids’ finding their own passion for something that’s totally foreign to them.”

Though it steals a good portion of her time, work’s not the center of Bell’s attention. When she leaves the office, her days still find ways to bear much fruit, as Bell has no trouble keeping herself busy with immediate obligations and endeavors of leisure.

“As a former teacher, I like to learn; I’m an avid reader. But when I get a chance to leave the page, I do like to spend my time with my corgi, so that prompts me to be super active in the great outdoors. I feel like a lot of my time is dedicated to work, but I still find a way to be involved, because it’s always been something I enjoy. Outside of my department in the Parks, I’m always down for all the special events we have going on — Popcorn Fest or whatever, you name it! Other than that, my girlfriends and I are obsessed with Broadway; we love plays and musicals. We're big Shakespeare fans, which definitely is not the personality of a U.S. sports director, and I still like to play basketball here and there when I can. My family is still around over here, too, so we do lots of stuff together. I cherish all the family time I’m able to get,” she said.

Bell’s clearly the energetic type, so it comes as no surprise that her future is just as bright as her present. She did remark that most long-term goals of hers are up in the air, but that’s never a bad thing.

Inspired by the successes that her grandparents have met in their lives with their raising kids and whatnot, Bell’s always been a go-getter. For her, it’s always been about bettering herself and those around her. Perseverance and the pursuit of has never ceased to arouse whatever goals or dreams she’s had in her life, and as it is for all of us, only time will tell what comes next.