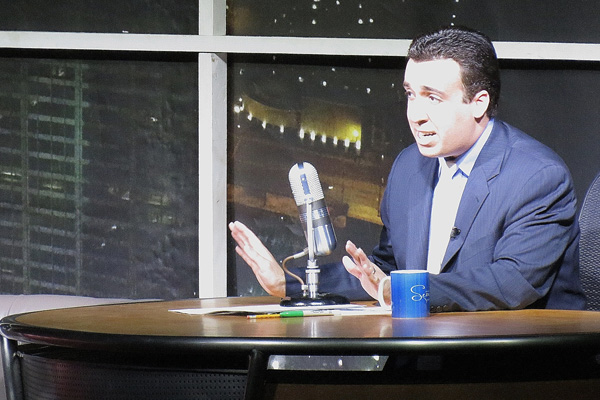 A familiar name and face is this week’s Valpo Life in the Spotlight. He is a native of Valparaiso, a best selling author and the host of Chicago’s only late night talk show, Seven on Ridge. If you guessed Michael Essany, then you are just too smart!

Essany was born in Merrillville and raised in Valparaiso. From a young age, he knew what he wanted to do because at the age of 12, Essany procured his own show. That was special to him because he was able to show other kids that it was okay to think outside of the box.

In 1997, The Michael Essany Show was created. It aired on E! Entertainment Television locally, nationally, and internationally. The show was based on The Tonight Show Starring Johnny Carson, and he had some pretty notable guests including Kevin Bacon, Jay Leno, and Walter Cronkite.

Essany attended Valparaiso University where he majored in political science. Here he not only found a good education, he found his wife, Christa. They had an English Literature class together during Essany’s junior year. Both were competitive and outspoken so they ended up competing for the best grade in class. Things only got better after that as they are now proud parents of their two-year-old daughter Gianna.

Essany and his wife received As in that English Lit class, by the way.

Over a year ago, Essany was contacted by a Chicago producer to create Seven on Ridge. At the time he was the Vice President of the Indiana Grain Company, LLC - a private trading firm. Now Essany is a full-time talk show host. The first taping was on September 15, 2012 and aired on September 17, 2012 and about three dozen shows have been completed to date.

“I’ve always loved the art of communication,” Essany said. “I get to talk to amazing people and provide a platform for people to get a break. Prior to Seven on Ridge no one knew about them. Meaningful to me because first, no other shows like this; and second East and West shows don’t have any new talent.”

How does his family feel about his busy lifestyle?

“I bring daughter to tapings to show what dad does; this way she knows where I am and what I’m doing. We’re very close. And she’s a little performer herself. My wife loves the process and the fact that I’m committed to area,” Essany said.

Speaking of the area, Essany spoke about how much he loves this part of the US.

“I love the people. These are my favorite people here. From early on I knew that I wanted to raise my family here,“ Essany said. “But I don’t like how so many people look down on this area. It’s a great place!”

In his free time, Essany likes to read -he is a history and biography buff, he spends time with his family, he tries to watch as many movies as he can, and he stays involved in the community and local politics.

Here’s some advice for anyone who wishes to leave their mark on the world.

“Embrace failure. Fail as much as you can.” Essany stated. “I’ve tried to do so many things and failed. Go for whatever matters most. Failure is not the worst thing; it is the best thing because it’s getting you closer to what you want to achieve.”

That makes a lot of sense. Here’s a neat little nugget of information: Essany’s favorite quote is: When opportunity doesn’t knock, build a door.

That was too good to leave out.

So there you have it, readers. This is a man who followed his passion and hasn’t stopped following no matter what obstacles he faced along the way. And now you see why Michael Essany is a Valpo Life in the Spotlight!

To find out more about Seven on Ridge, click here!

Or check out the Seven on Ridge Facebook page!