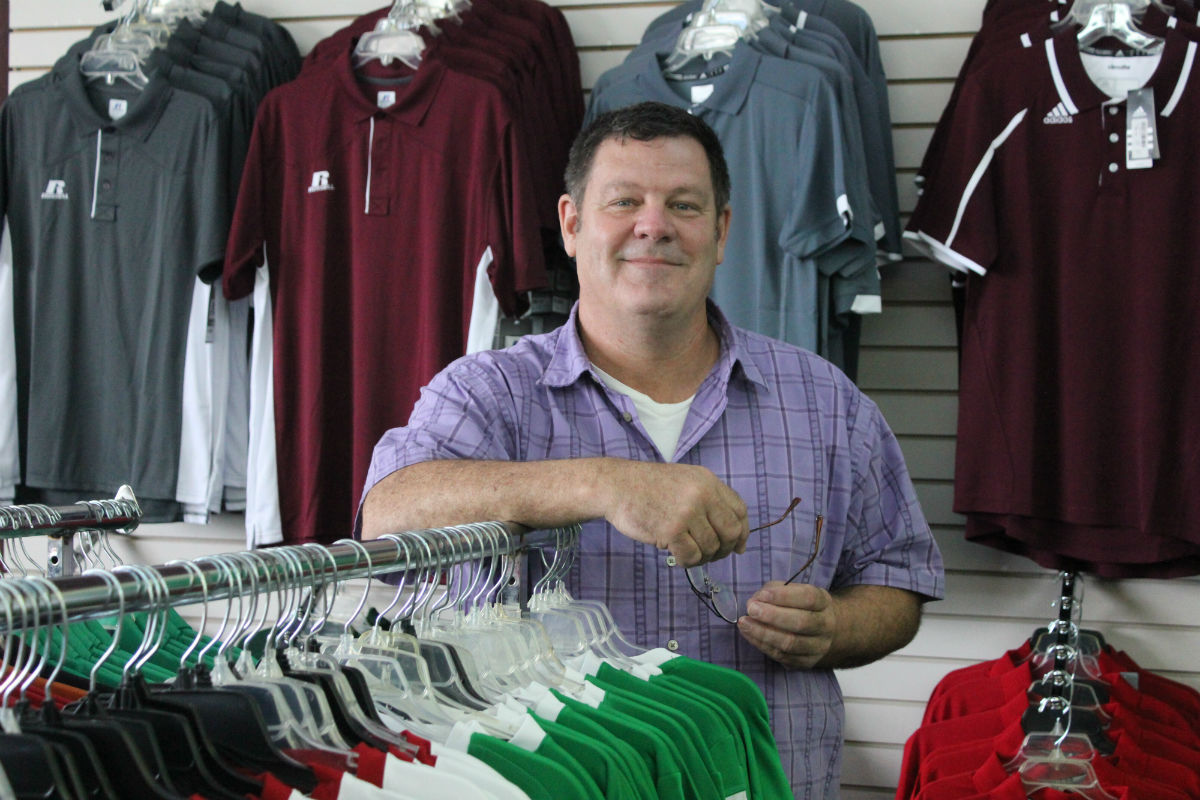 When you first meet and talk to Mike Blythe, he seems like a guy you've known for ever. His kind, easy-going, demeanor endears all who have the opportunity to meet and know him.

Born in Griffith, Indiana, Mike moved to Valparaiso in 1979, when the Blythe's store was built and opened. Mike was instrumental in helping his father build and then open his father's dream store, which at the time was a hunting and fishing supply store. It has since transformed into a full line athletic supply store which serves high school and middle school athletic programs across the region.

Although he is now the owner and manager, he is quick to share the credit of the store's success to his 28 employees.

"Love my business everyday. I love my people, they're my family," he said.

Mike is the father of two daughters and one son and is the proud grandfather to one granddaughter and is excitedly awaiting the birth of another grandchild due in November.

A little known fact about this jovial, smiling man, is that he is also the owner of a farm in Morgan Township, where he raises and sells Labrador Retrievers and Quarter Horses. He currently houses over 40 horses on his farm. He is heavily involved with horse shows and volunteers a great deal of time with the Midwest Saddle Club, a nonprofit organization that works with kids, teaching them to ride and helps with their performance during the horse shows.

Annually in July, in conjunction with his friend Dr. Larry McAfee, Mike participates in the "Take-A-Kid-Fishing" program, sponsored by the Boys and Girls Club. The event alternates between ponds owned by he and McAfee. "This year we had 35 kids. It gives kids who wouldn't normally have the opportunity to go fishing, a chance to do so."

During his early years in Valpo, Mike spent a lot of time coaching teams for both Valparaiso Americans Baseball and Valparaiso Pop Warner Football.

His only regret during the early years of his business, was not purchasing a small camera to make photos of all the kids that came in to pick up their letterman jacket. Looking back he wishes he would have made a large photo board in the store. It would have held thousands of smiling faces with the most notable being Jeff Samardzija and Tim Bishop.

When speaking of his career, one of the biggest highlights for him has been watching the kids he employed grow and progress in their lives and careers and then returning to share their success stories.

Mike's positive influence on generations of community members make him this week's Valpo Life in the Spotlight!