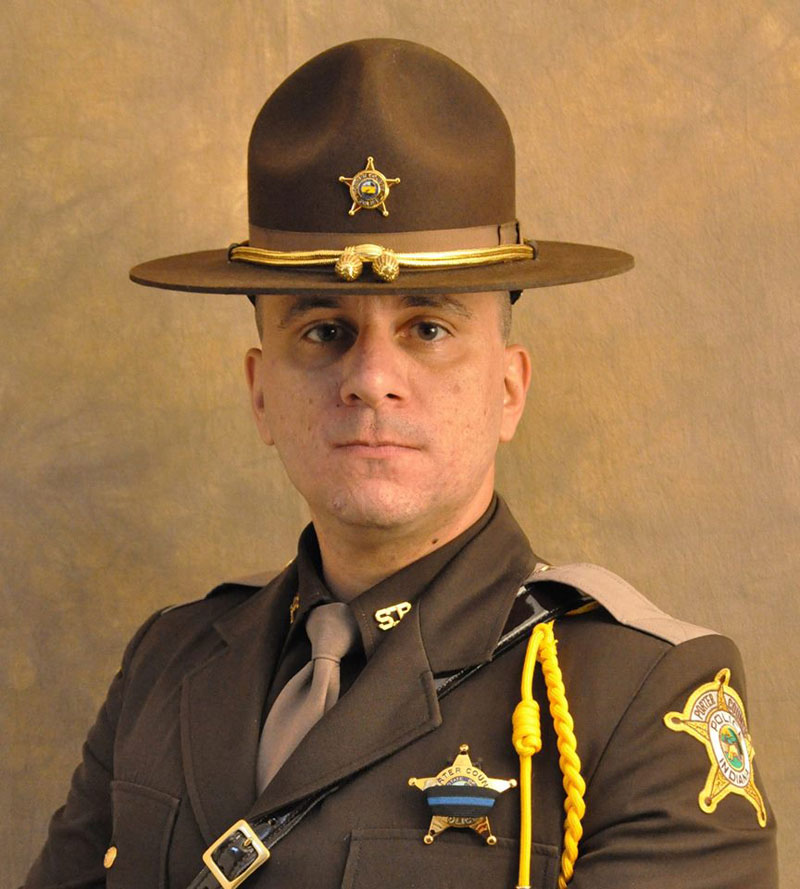 Porter County Sheriff’s Department police officer Paul Czupryn is an individual dedicated to his duty. Coming from a long line of law enforcement members, Czupryn was raised with the ideals of serving and protecting the community.

“My grandfather was a police officer, as well as my father, uncle and older brother,” says Czupryn. “Law enforcement has always been a part of my family.”

Czupryn’s respect for law enforcement was heightened after riding with his brother during a routine patrol. It was during this ride that Czupryn understood the sacrifice and dedication one has to the badge as well as the respect one can garner from the community by performing this duty.

“When I rode with my brother, I felt a sense of pride,” says Czupryn. “I was proud of my brother and everything he did to protect the community.”

Czupryn feels that building good relationships with the community is one of the greatest rewards that his job offers as well as living and working in Porter County.

“Building good relationships is definitely one of the positives that come with my job,” says Czupryn. “Porter County is a fantastic place to live in, work in and visit. I love being here and working here.”

Czupryn also credits the sheriff’s department as a great place to work and a place that is always willing to go above and beyond to serve their community.

“I feel like that in Porter County, we’re not fighting a losing battle against crime,” says Czupryn. “It’s great to be working for an agency that goes far and above what is required of them to best serve the community.”

Czupryn’s job is one that is much more solitary based than other jobs. Many times sheriff’s officers are on patrol alone or on call without help. This makes an already dangerous job even more so, however, Crupryn feels that despite the lonesome nature of the job, the amount of officers trained in specialties makes everyone better and able to learn from one another.

“The benefit really is that everyone who works here has their own niche and can learn from those who do things better than them in an attempt to become more well-rounded and knowledgeable,” says Czupryn.

Czupryn's job, unlike most jobs, does not have the luxury of downtime, using most of his available free time to continue working jobs to supplement his family.

‘There’s really no free time for me, I work as much off duty as I do on duty,” says Czupryn.

Czupryn, along with his current position also works with 12 other specialties within the agency. This leaves Czupryn with very little personal or downtime, however, the enjoyment he gets from his job and his ability to engage with the community offsets the long hours.

“The work I do is not particularly challenging to do,” says Czupryn. “Sure there are some stressful parts to this job, but overall it's very enjoyable to me, it’s not a drag at all to go to work.”

“Usually when it comes to police calls, most of the encounters we run into are generally negative, but sometimes you run into positive interactions,” says Czupryn “A few days ago we had someone buy us our lunch as a way of saying thanks for what we do. These can happen on a daily basis and it’s these things that keep us appreciating the community and prevents us from becoming jaded."

It’s this mix of the highs and lows, but mostly highs that Czupryn takes into account when putting on the uniform and performing his job every day. In his own words, he’s here to make a difference in the community one day at a time.

“I take every day one day at a time,” says Czupryn. “I know I’m making the world a better place and together we’re winning the inherent battle of good triumphing over evil. At night, I know that the work I did during the day makes it a better place than before and for me, that’s enough.”