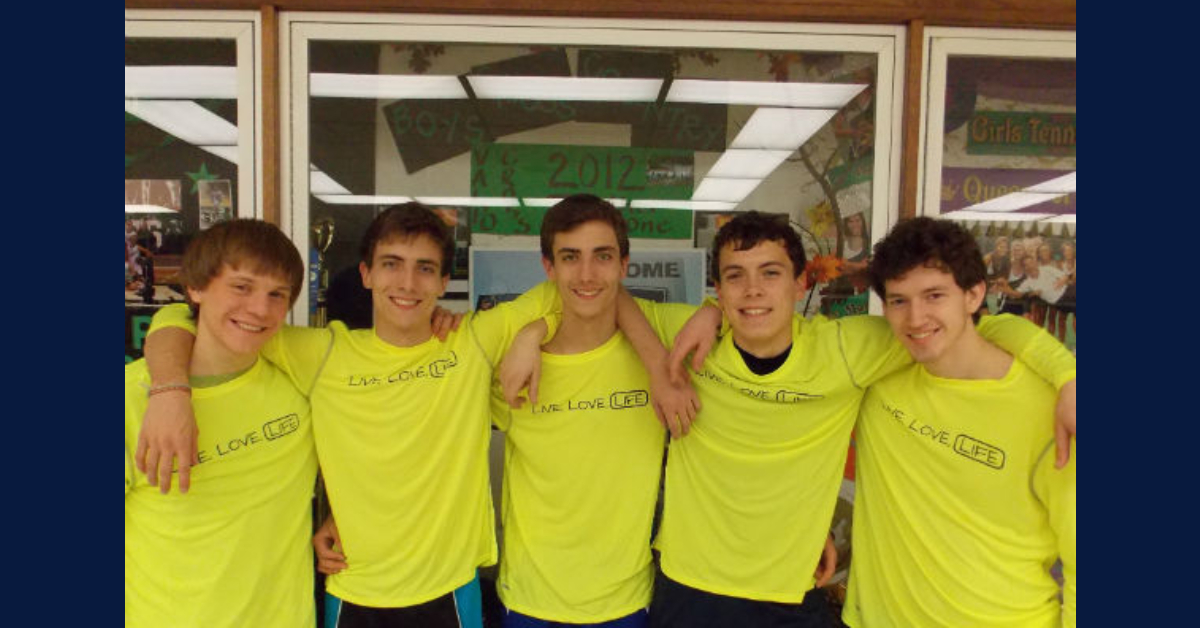 The Valpo Life in the Spotlight this week is rather unique because it doesn’t belong to just one person it belongs to five young men on the Valparaiso High School Cross Country Team.

Peyton Reed, Xavier Reed, Connor Ritzi, Andrew Jankowski and Corey Alfredson of the Valparaiso High School Cross Country Team were out on a practice run through the rolling hills of a Forest Park neighborhood when Ritzi spotted something in the road. As they were on the run, they continued another loop through the neighborhood, but on that second loop they stopped; it was a wallet.

Ritzi said, “At first I didn’t quite know what it was, but on that second loop I knew it was a wallet.”

Payton Reed reached down to pick it up.

He said, “I wasn’t thinking we’d actually find money in it; thought it’d be empty, but then I saw it. I was so surprised to see a large amount of cash. We all came to the same conclusion that we needed to return it, so we looked at the drivers license to see who the wallet belonged to."

Xavier Reed approached the house and rang the bell.

He said, “I really didn’t think anyone would be home, so we decided that if no one answered, we’d give it to coach (Coach Mike Prow). Someone answered, she looked confused with five cross country runners at her door, but we asked if Dale Allen lived at that address. She looked skeptical at first but then said that he did and then we told her we had found his wallet with a large amount of cash and credit cards inside of it so we looked at the license to try to find the house of the owner. Then she had a look of shock on her face; shock that we brought it back and she was so happy.”

Mrs. Allen was so excited to have such nice, honest boys return the wallet that they had found that she insisted they take a small reward. At first the boys said no, they just wanted to do the right thing and return the wallet, but she insisted. It wasn’t much; just enough for the guys to split a pizza at the end of their day, but to them it was a big reward. The boys met after practice, enjoyed their pizza and replayed the day.

Jankowski spoke of the experience and said, “It feels really good to do the right thing. It made our run more exciting. It also made us feel good because Mr. Allen could have lost a lot valuable things that day and we were able to return it.”

When the boys told their coaches about their adventure during their run, it really didn’t surprise them that the boys were honest in their goings.

Coach Crague joked with the boys saying they could have bought a lot of uniforms for the team, but in all seriousness, Crague said, “At the end of the day we stress to the guys to be good people, to be trustworthy and of good character. It is important to our team, it is important to our school corporation and it is refreshing that our guys are doing good things and making good decisions.”

I spoke with Attorney Dale Allen after his wallet was returned and he said, “It renewed my faith in humanity.”

Allen said that he knew just how he lost it.

“I was taking my mom to the off-hour clinic. After we were in the car, her oxygen tank fell. I jumped out of my car to fix it and that had to be when my wallet fell out of my suit,” Allen said.

Allen shared his wife’s reaction to the boys returning the wallet.

She said, “These good looking young men asked, ‘Does Dale Allen live here?’ And my initial reaction was ‘What did he do now?’”

Mr. Allen added, “We have a soft spot for cross country because our son Ryan ran cross country at Ben Franklin Middle School. We enjoy seeing the boys run through the neighborhood. There is nothing worse than a thief! The parents did a fine job raising these boys.”

Doing the right thing, being honest and thinking of others is why Peyton Reed, Xavier Reed, Connor Ritzi, Andrew Jankowski and Corey Alfredson are this week’s Valpo Lives in the Spotlight!